It Ain’t Over: ETSU Rallies from Down 7-0 in Set 5 to Top Tennessee 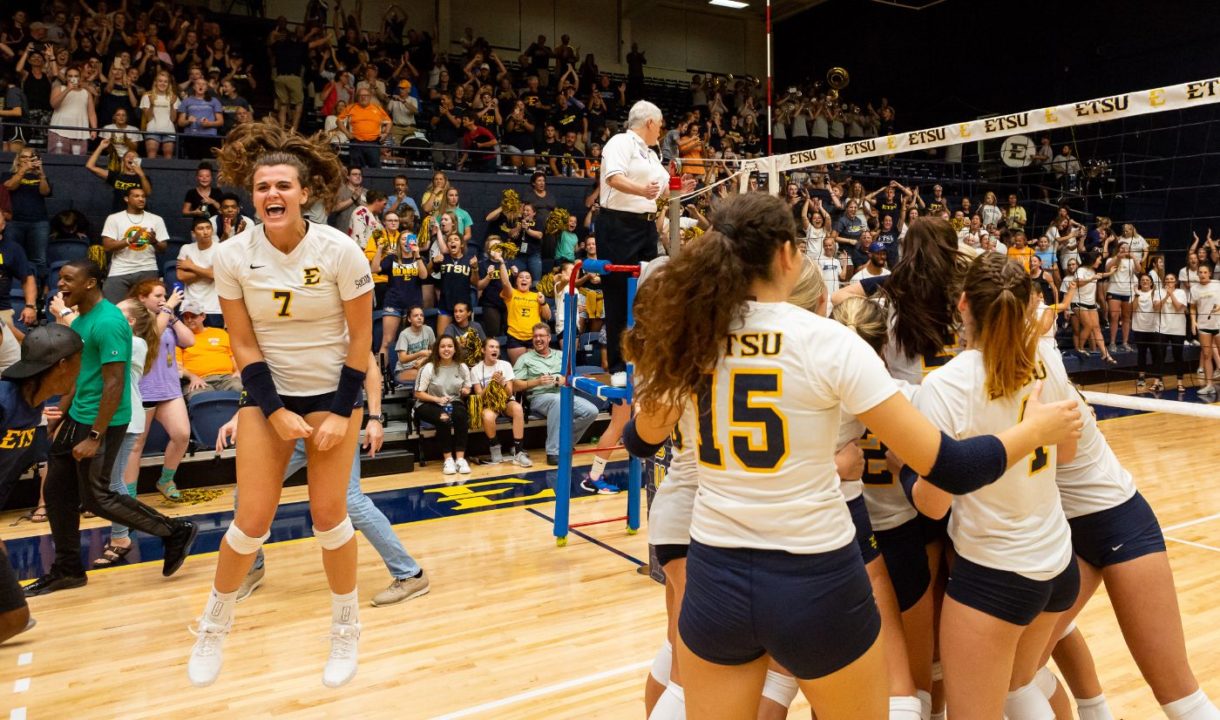 A career night from outside hitter Tessa Grubbs was not enough to help Tennessee escape Johnson City with a victory on Tuesday. Instead it was the host East Tennesee State Bucs who pulled off a comeback, including a rally from down 7-0 in Set 5, to thrill the crowd of 2,016 inside Brooks Gym.

“To be able to get a win in front of a crowd like that, it doesn’t matter who the opponent is,” head coach Lindsey Devine said. “That crowd was phenomenal. It goes to show that we have the best crowd in the northeast state of Tennessee, so we’re pretty lucky. We were able to execute our game plan and I think that the girls put in a lot of heart. They used their minds when we need to, to really focus. Those are kind of the things we’ve been talking about; follow the game plan, win games with your mind, play hard, and great things are going to come your way.”

This is the second straight win in the series between the Buc and the Vols with the last coming in 2013 in a four-set victory.

It Was Over When: After falling behind 2-1 in the match, ETSU flipped a switch in Set 4, cruising to a 6-2 lead including two kills and a block by Kaela Massey. The Vols narrowed the gap to two eight times, last at 16-14, but could not break through. An 8-3 run, including kills by four different players, put ETSU on the brink of a fifth set at 24-17. Tennessee thwarted two set point tries, before a service error leveled the match at two sets apiece.

The Vols appeared to have regained their form in Set 5, opening the stanza with seven straight points, including four putaways by Tessa Grubbs. The Bucs climbed back into it with two AJ Lux kills and an Alyssa Kvarta ace. Massey fired up the crowd with a solo stuff of Grubbs (see video below) to make it 7-4 and tacked on two more kills to push ETSU out to a 9-7 advantage. Kvarta served up eight points in the run.

Tennessee recovered with back to back Grubbs kills to tie it up, but the momentum belonged to the home side, who would not trail the rest of the way. The teams traded two-point runs, leading to a tieup at 11, but ETSU outscored the Vols 4-1 down the stretch to close out the comeback. Massey, Braedyn Tutton and Leah Clayton notched kills to give the Bucs a match-point try at 14-11. A Madison Coulter putaway kept the set going momentarily, but Clayton brought down the house with the final blow at 15-12.

“Honestly, there’s no words right now,” Lux said. “Like coach said, the crowd was unreal. I think that’s what got us fired up the most. Any chance we get to play a big team, an SEC team, any team that we get to play at home, they are going to have a tough match coming in because we’re really good at home. We’re hard to beat at home, but it was a great match for us. We were able to stay calm the entire time, which is something we’ve struggled with. I wanted to take the role of being able to put the ball away, but also be a mental leader. Some of these other girls haven’t been in these positions before and I think that’s what got us the win. We were more experienced. We knew exactly what to do. We had a tough week of practice, but we were able to execute everything we talked about.”

Stat Leaders: Kaela Massey led the way for ETSU with a 16-kill, 14-dig double-double, the first of her career, to go with four blocks, while hitting at a team-best .379 clip. Leah Clayton and AJ Lux tacked on 15 putaways apiece. Mariah McParland chipped in seven kills and a team-leading six stuffs. Alyssa Kvarta notched a 47-assist, 21-dig double-double.

On a night where Kaela Massey got a career-high in both kills and digs, she helped ETSU storm back from being down 7-0 with this huge block that changed the momentum in the fifth set and helped the Bucs complete the comeback. @NCAAVolleyball @AVCAVolleyball #NCAAVB pic.twitter.com/IQKvgNw5tX