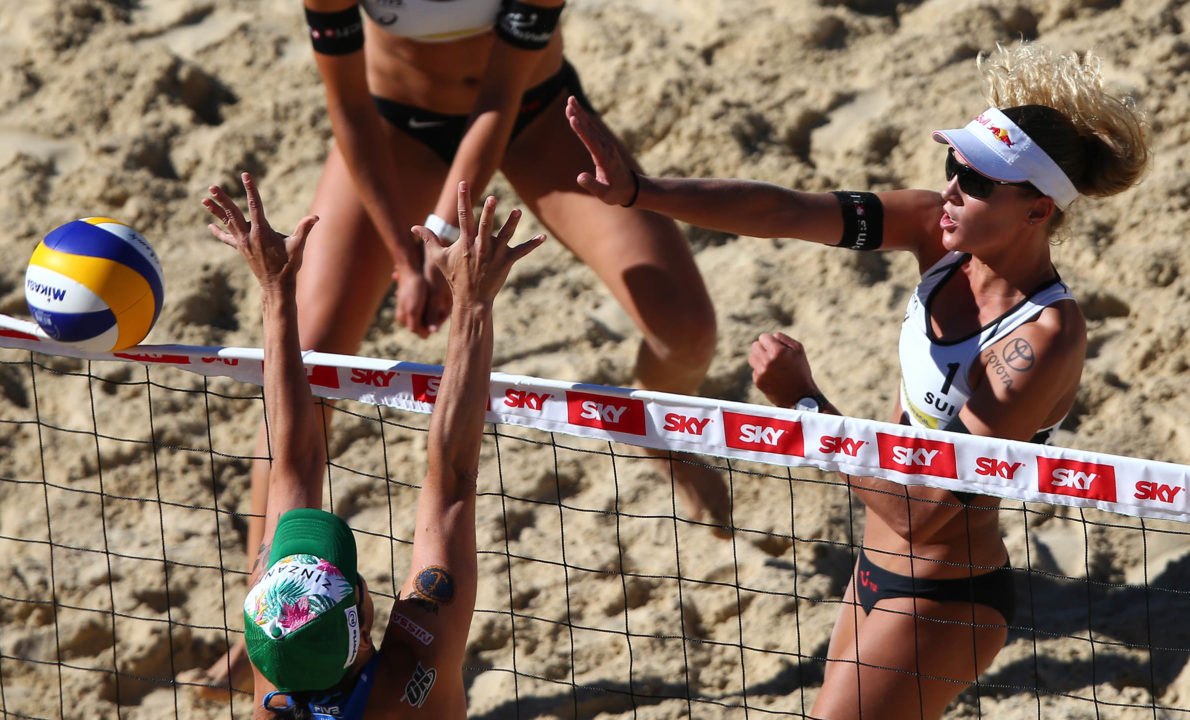 Three-time Olympic gold medalist Kerri Walsh Jennings is taking her commitment to making her p1440 volleyball tour, concert and wellness series an international affair one step further, as she will playing the inaugural event in San Jose with Swiss star Anouk Vergé-Dépré‏.  Current Photo via FIVB

Kerri Walsh Jennings‘ goal for her p1440 volleyball tour, concert and wellness series was always for it to be an international affair and draw in the best names from around the world.

P1440 has signed sponsorship deals with duos from Brazil, Spain, Latvia and Canada to prove it, bringing Canadians Heather Bansley/Brandie Wilkerson into the fold most recently.

Now the three-time Olympic gold medalist is taking her commitment one step further, as she will playing p1440’s inaugural event in San Jose with Swiss star Anouk Vergé-Dépré‏.

Walsh Jennings, who parted ways with partner Nicole Branagh in July, most recently played in a NORCECA qualifier with Kelly Claes, winning the title.

Walsh Jennings went on to say this about Vergé-Dépré‏:

“Anouk is one of the very best players in the world. She plays with

❤️, major hustle, and tons of

🔥! We’ll have to figure out who’s playing on the #leftside but other than that we’re all set

🙌 Anouk is a 2016 Olympian from Switzerland

🇨🇭. She and her partner @joanaheidrich have enjoyed success these past two seasons on the @fivbbeachvolleyball #WorldTour . Two tall girls getting it done

🤑, broadcast on @abcnetwork , taking on the world’s best …. I’m #allin

BIG NEWS ‼️ Until @joanaheidrich gets back I get to train and play with the three time olympic gold medalist @kerrileewalsh for the first stop of her tour @platform1440 28.-30.9.18 in San José (CA) ☺️! Very honored and excited!😍 #usa #sui #p1440 🇺🇸🇨🇭 pic.twitter.com/HMwOZ3nr9W

Vergé-Dépré‏’s partner Joana Heidrich is recovering from back surgery for a herniated disc she suffered at the Gstaad Major in July. According to media reports, the pair is shooting for a January return to the World Tour, but the pair could play p1440 events in November and December if Heidrich’s recovery allows. The Swiss duo finished ninth at the 2018 CEV European Championships and notched their best FIVB finish of the year with a runner-up effort at the Itapema Four Star in May.

According to other social media announcements, the p1440 San Jose Invitational will be a star studded affair, including FIVB World Tour Champions Anders Mol/Christian Sorum.

And there won’t just be stars on the court. Anne Marie Anderson and Holly McPeak will be calling the semifinals and finals on ESPN and ABC for the San Jose Invitational.

This really IS and has been @kerrileewalsh 's goal … for ALL the athletes. They are PROFESSIONALS and should be paid as such. I'm so proud to be associated with @platform1440 and can't wait to call their ground-breaking events with @hmcpeak1 on #ESPN and #ABC #volleyball https://t.co/XtEjd6orDh

P1440 also announced the prize money for the event, breaking down the $150,000 prize pool per gender.

The Sept. 27-30 event, which is being held in conjunction with the FIVB as a Four-Star event and Olympic qualifier,  is slated for 32 qualifying teams and a 24-team main draw.