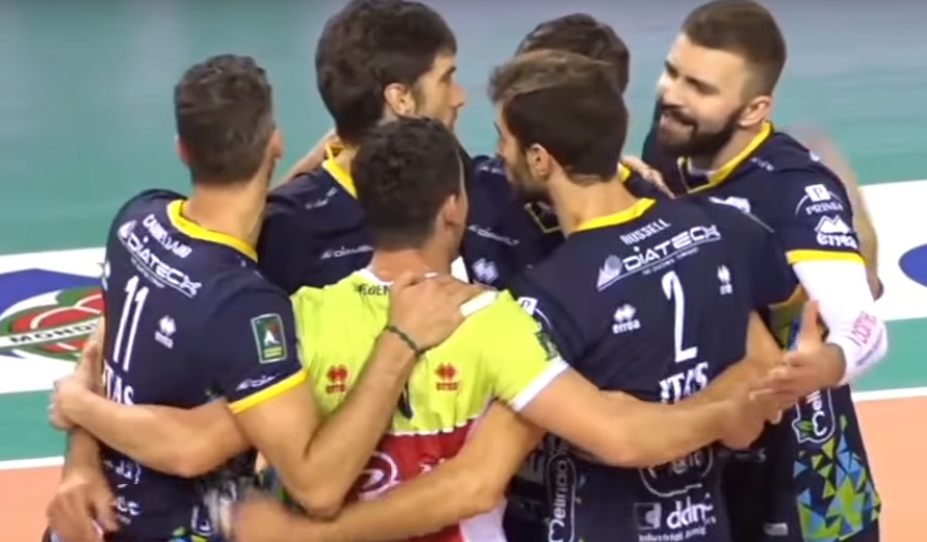 The acquisition of Aaron Russell has continued to pay dividends for Trentino. He led his squad again on Sunday with 16 points on 11 kills, 2 aces, and a match-high 3 aces. Russell posted a .333 (46%) hitting percentage in the win. The only thing less than stellar about his performance was his passing. He committed 3 errors in reception and only 38% of his passes were positive. These are not poor statistics, just not up to the level of performance in the other facets.

Uros Kovacevic scored 15 points from the other outside hitter position. His points came on 14 kills and a block. Luca Vettori finished with 12 points on the right side with all of his points coming from kills. His kills were accompanied by 6 attack errors, and he hit .188 (38%).

Dusan Petkovic, the leading scorer in the SuperLega last season, led Sora with 19 points on 18 kills and an ace. Joao Rafael helped Sora with 18 points on 16 kills and 2 aces. Rasmus Nielsen scored 13 points on 10 kills, 2 blocks, and an ace. Kupono Fey was used as a substitute in the 2nd set. He served once and received 2 serves that were classified as perfect.

Amir Ghafour, opposite from Iran, led Monza to victory with 21 points on 21 kills. Donovan Dzavoronok contributed 16 points from the outside on 16 kills. Oleh Plotnytskyi replaced Iacopo Botto  (2 points) in the 2nd set and scored 7 on 6 kills and an ace. Viktor Yosifov was impressive in the middle with 15 points on 12 kills and 3 blocks. Santiago Orduna, 2 years removed from Modena, set Monza to a  .434 (55%) hitting percentage in the win.

Latina was paced by Simone Parodi and Toncek Stern in their 1st win of the season. Parodi, a former player for the Italian National Team, led the way with 19 points on 16 kills, 2 blocks, and 1 ace. Stern scored 18 points at the opposite from 16 kills and 2 aces. Ezequiel Palacios scored 11 from the outside hitter position with 10 kills and 1 ace. Most of their production came from their pin-hitters, as only 6 points came from the middle blockers.

The prospects were not looking good for Milan after it was announced they would be without Nimir Abdel-Aziz. They did not let the absence of one of the great scorers in the SuperLega hold them back. Stephen Maar stepped up on the outside to lead them with 15 points on 13 kills and 2 aces. Luka Basic came in to replace Trevor Clevenot (5 points with a -.154 hitting percentage) in the 2nd set and scored 7 points. His points came entirely on 7 kills. Matteo Piano led them in the middle with 11 points on 5 kills, 4 blocks, and 2 aces. Alessandro Tondo filled in at opposite and produced 12 points from 9 kills, 1 block, and 2 aces.

Maurice Torres, Puerto Rican opposite who played in the NCAA for Pepperdine, scored 22 points for Padova. His points came from 19  kills, 2 blocks, and 1 ace. Luigi Randazzo scored 14 points from the left side on 12 kills and 2 blocks. They wee the only Padova players to score in the double digits.  They only hit .283 (44%) in the loss.