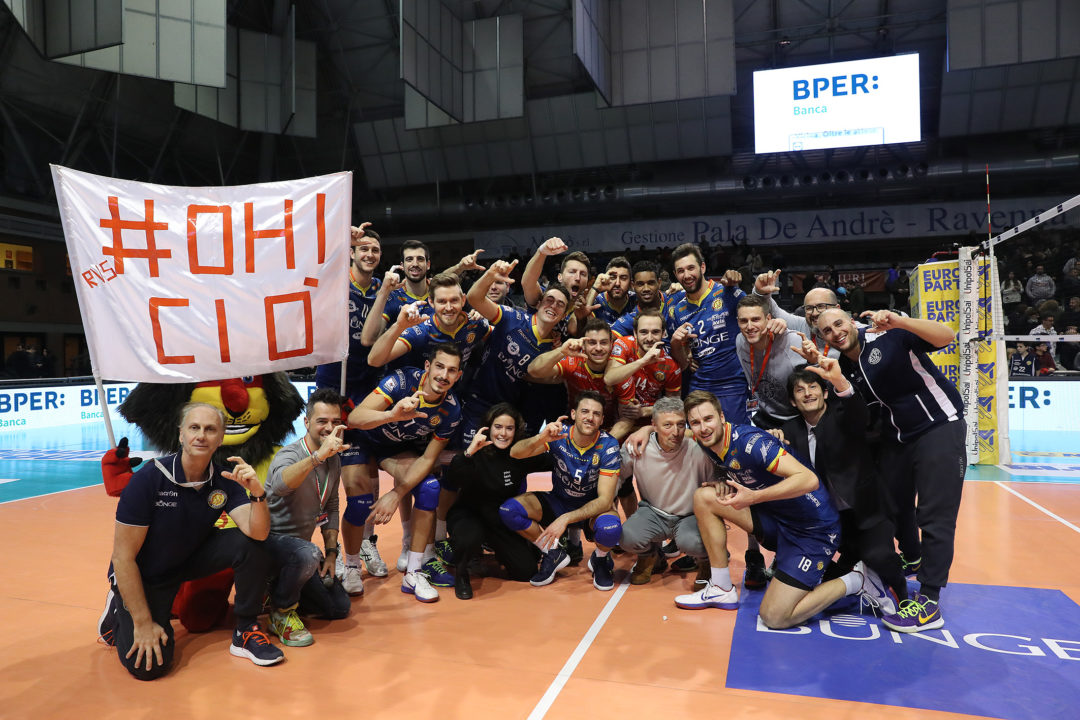 Teams in the SuperLega are scrambling for the last few playoff spots as the end of the season approaches Current Photo via legavolley.it

Just when we thought that the playoff teams in the SuperLega were set, two unlikely outcomes in the 20th round keeps the hunt interesting. At this point in the season, 9 teams are competing for 8 playoff spots. 3 of those teams, Sir Safety Conad Perugia, Azimut Modena, and Cucine Lube Civitanova are so far ahead in the rankings that they are guaranteed a spot even if they lose the rest of their matches of the season.  2 teams, Diatec Trentino and Calzedonia Verona, have had shaky stretches of play during the season but should have a spot in the playoffs barring catastrophic collapse. The 5 teams at the bottom of the standings will fight for position amongst themselves but will not break into the playoff picture. That leaves 4 teams, Piacenza, Padova, Ravenna, and Milano to fight for 3 remaining spots.

It looked like Ravenna was in danger of losing their spot in this group, but with a win against Padova in round 19 and a win against Verona on Sunday, they are still a threat. Paul Buchegger has continued his sensational play, racking up 26 kills, 2 blocks and an ace in the win. Ravenna has three easy matchups in a row against Grotte, Latina, and Valentia so getting the full 3 points against each of those opponents will be important.

Padova has not done themselves any favours with a surprising and frustrating loss to Gi Group Monza. Canadian Brett Walsh and Monza captain Simone Buti played some of their best volleyball of the season, taking out the 8th place Padova in 4 games. This makes the playoff odds for Padova a lot shakier, but they are still the masters of their own destiny with games remaining against Piacenza and Milano.

Wednesday games this week with a break in the champion’s league. Huge game between Padova and Piacenza as far as the playoff race is concerned. Other than that most games appear to be one-sided affairs, but with SuperLega you never know.