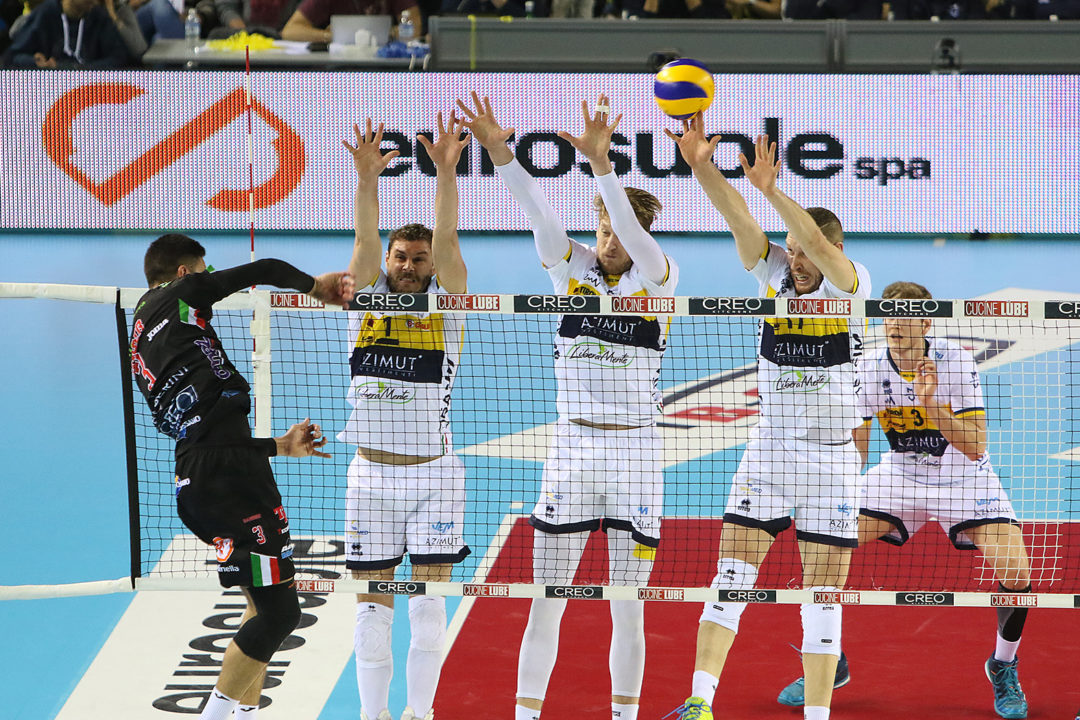 Azimut Modena crushes 2nd place Lube Civitanova while other teams in Serie A had tougher victories in multiple 5 set games.  Current Photo via Courtesy of legavolley.it

Some unexpected results for many teams in the 19th round of the Italian Men’s Serie A. The VolleyMob most anticipated matchup of the week, Lube Civitanova vs Modena, turned out to be a dud. Even without superstar Earvin Ngapeth, Modena was able to pick apart a Civitanova lineup that had come in 2nd place in the FIVB World Club Championships back in December. Credit is due to coach Radostin Stoytchev for orchestrating such a convincing defeat, and to opposite Andrea Argenta who scored on 11 of his 14 attacks in just his second game as a starter for Modena.

For the 4th time this season, 3 games went to 5 sets. Piacenza came back after losing the first two sets against Milano, who was playing without league-leading scorer Nimir Abdel-Aziz due to a abdominal strain. Most of the sets allocated to Aziz were instead given to Klemen Cebulj, who had his best game of the season with 24 kills on 50 sets. BCC Castellana Grotte, a veteran group underperforming their preseason expectations, beat a struggling Monza squad behind some clutch serving from George Tzioumakas who had 6 aces in the match. Kione Padova and Bunge Ravenna played in an epic showdown, with a combined 163 points scored between the two teams. Ravenna came out victorious behind their internationals, with 28 points from Austrian Paul Buchegger, 20 from Argentinian Cristian Poglajen, and 15 from French Nicolas Marechal.

The focus will shift this weekend from the regular season to the Italian cup. On Saturday, January 27th, Perugia will play Trentino and Modena will play Lube Civitanova in the cup semifinals. With Luca Vettori playing better Trentino should have the weapons to compete with the big dogs of the league, and Lube Civitanova will have have the opportunity to redeem themselves after embarrassing themselves against Modena.