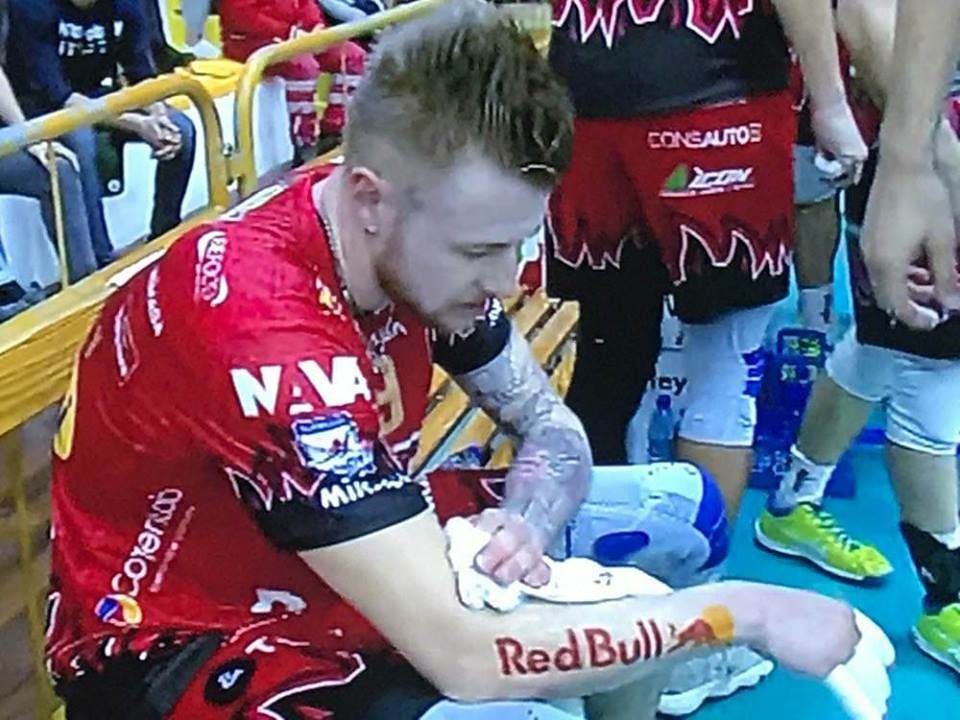 Volleyball superstar Ivan Zaytsev has taken a page out of the playbook of beach volleyball players and gotten advertisements tattooed on... Current Photo via Dal 15 al 25/RAI Sport Broadcast

Volleyball superstar Ivan Zaytsev has taken a page out of the playbook of beach volleyball players and gotten advertisements tattooed on his body.

After the league made a rule outlawing the sleeved undershirts that he’s worn that featured the logo of his personal sponsor Redbull, Zaytsev used a technique first employed by American beach volleyball players and got the Red Bull logo tattooed on his right forearm.

Don’t be too alarmed – the tattoo is a temporary one (as compared to his non-ad, full left sleeve tattoo, which is very real).

On the court, in his first game with the sleeve, his club Sir Safety Perugia swept Vibo Valentina 3-0. Zaytsev had 11 points in the game with 7 kills on 17 swings (41% effectiveness). He also added 2 aces with his best-in-the-world serve.

In a recent interview with oasport.it, Zaytsev discussed the situation of his presence in the Italian National Team. He was absent from the squad this summer, along with 2 of his fellow Italian starters, and Italy struggled – they finished just 2-7 and in last place of Group 1 just a year after taking Olympic silver in Rio.

“For the blue jersey I would do anything. The present state of affairs is an evolving situation where we are finding the right solution. I would go on, but I cannot say much about this affair.”

Read the full interview here, where he talks about where he considered quitting the National Team at the 2014 World Championships.