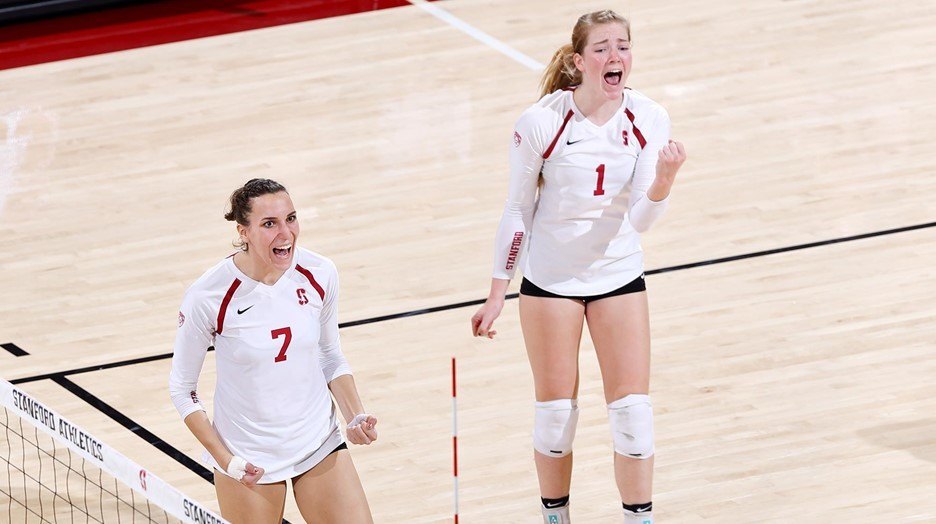 #2 Stanford remained undefeated in PAC-12 play, defeating the host Arizona State Sun Devils in four sets. Scores were 25-22, 25-16, 21-25, and 25-13. Setter Jenna Gray dished out a match high 56 assists as the Cardinal out-hit the Sun Devils .410 to .208. Kathryn Plummer paced the offense with 23 kills while Merete Lutz and Audriana Fitzmorris chipped in 11 kills apiece. Morgan Hentz led the defense with 16 digs as the Cardinal improved to 18-2 (11-0 PAC-12). Stanford returns to action on Sunday, October 29th as they travel to take on Arizona.

Although the Sun Devils were able to take down a set, it was a dominating effort from Stanford who led the match in every major statistical category, collecting more kills 61-44, aces 7-3, blocks 8-4, and assists 60-39. Both teams collected 47 digs.

It’s been a tough year for Arizona State under first year coach Sanja Tomasevic, as they are still searching for their first conference win of the year. Oluoma Okaro led the offense with 19 kills while Peyton Grahovac chipped in 9 kills. Setter Nicole Peterson collected a team high 30 assists and 14 digs. The Sun Devils drop to 10-13 (0-11 PAC-12) and will return to action on Sunday, October 29th to host California.

The Sun Devils hung with the Cardinal in the opening set. Tied 18-18, Stanford capitalized on a 7-4 run, including an ace and two kills by Plummer to seal the win.

Sophomore setter Jenna Gray dished out 56 assists as Stanford hit .410 as a team for the match. Sophomore libero Morgan Hentz finished with 16 digs, while freshman Meghan McClure matched her career-high with 14 digs.

Gray opened the second set on a 4-0 run from the service line as Stanford led the entire set. The Cardinal hit .500, while holding the Sun Devils to a .200 clip.

Arizona State came out hot to start the third set, leading 9-2. The Cardinal slowly crawled its way back into the set, capitalizing on Sun Devil errors to tie it 12-12. ASU then went on a 10-2 run to hold a 22-14 lead and held off a late surge by the Cardinal.

Stanford finished off the Devils in the fourth, hitting .545 while ASU managed just seven kills. Senior Oluoma Okaro led Arizona State with 19 kills on .300 hitting. Sophomore setter Nicole Peterson had a double-double with 30 assists and 14 digs.

Stanford concludes its road trip on Sunday at Arizona. The Cardinal and Wildcats are set to square off at 1 p.m. on Pac-12 Networks.