Johnson & Wales edged Wesleyan in every statistical category with help from a 20-kill, 10-dig double double by sophomore outside hitter Maria Coniglio in a four set win to remain undefeated on the season and give Nancy Somera her first career win over her husband Ben. Current Photo via Johnson & Wales Athletics 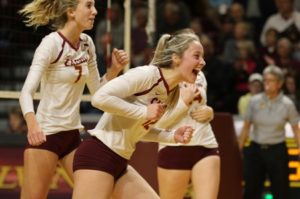 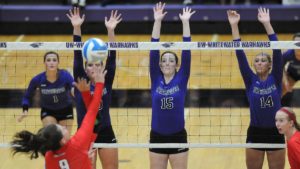 There are coaching rivalries and then there are the Someras. In maybe the most unique coaching matchup in collegiate volleyball this year, husband will face off against wife as Division III Wesleyan (Conn.) and Providence Johnson & Wales meet in Middletown, Connecticut, Thursday night.

Nancy Somera‘s Johnson and Wales team came into the match at No. 14 nationally and No. 1 in the NCAA New England Region rankings with a 23-0 mark, while Ben Somera‘s Wesleyan squad was third in the regional listings with a 16-2 record.

In more than 20 years of coaching, this will be the first time the couple has found themselves on opposite sidelines although volleyball has always been a part of their relationship.

Nancy got her start in collegiate volleyball as a player at USC (1985-88) and was a member of the Trojans’ 1985 Final Four team, while also earning All-Pac 10 honors her final two seasons. Her first coaching gig was as an assistant at Golden West College in 1990. She was then an assistant coach at her alma mater for eight seasons before acting as the head coach at Oregon State for six years (1999 to 2005) and South Carolina for two (2005 and 2006). She later coached high school and was club director for Midlands Volleyball while working in the private business sector. In 2014, the coaching ranks called again and Nancy took over at Johnson & Wales, leading the team to the Great Northeast Athletic Conference title game her first season and to back-to-back GNAC championships in 2015 and 2016. The 2016 team went on to the NCAA Division III tournament and earned Somera GNAC and AVCA DIII New England region Coach of the Year honors.

For his part, Ben is in his third year at Wesleyan, where his team is coming off its first NESCAC Tournament berth in five years and first winning conference mark (6-4) since 2008. The USC alum started his coaching career as a volunteer assistant with the Trojans in 1993 and assistant coach in 1994. From 1999-2006, he worked as an assistant and later associate head coach under Nancy at Oregon State. The duo took their game to South Carolina in 2005, where Ben was an assistant for two years before taking over the program in 2007. He was with the Gamecocks through the 2011 season and then took his talents to Rogers Williams, where he led the team to three conference titles and three NCAA Division III Tournament berths.

MIDDLETOWN, Conn. – Johnson & Wales edged Wesleyan in every statistical category with help from a 20-kill, 10-dig double double by sophomore outside hitter Maria Coniglio in a four set win to remain undefeated on the season.

Coniglio led all hitters with 20 kills on a .341 hitting effort, while junior outside Katie Leidhold (14) and sophomore setter Brylee Frank (8) followed. Frank hit at a team-best .615 clip, while Leidhold put up a team-leading four blocks and rounded out a double-double with 13 digs. Freshman libero Elyssa Nicolas was tops among four players with double-digit dig totals with 17, followed by junior defensive specialist Monica Cordova (13), Leidhold (13) and Coniglio (10). Coniglio, Cordova, Frank and Leidhold each served up two aces.

Wesleyan led by as many as four early on in the match, last at 10-6, before Johnson & Wales knotted the score at 10 en route to a 15-14 lead of its own. After three straight Wesleyan points made it 17-15 Cardinals, it was nearly all Wildcats the rest of the way in the 25-20 victory. Two aces, two Coniglio kills and four Wesleyan miscues aided the final 10-3 run.

Down 3-0 early in Set 2, the Cardinals turned the set around with an 8-3 run with help from four Wildcat errors. Wesleyan upped its advantage to four at 11-7 and to six at 19-13 as Johnson & Wales committed six more miscues. The visitors chipped away putting within one at 23-22 as four different players notched kills and Coniglio added two kills and an ace. A Litinsky kill made it 24-22 and another capped the 25-23 win.

Johnson & Wales cruised to a 9-4 advantage in Set 3, but Wesleyan countered to knot the score at 12. A 5-0 run, including two Frank putaways, gave the Wildcats breathing room at 17-12, but the Cardinals charged back to within one at 18-17. Johnson & Wales scored seven of the final 10 points to go up 2-1 in the match. A service error accounted for the set clincher.

Johnson & Wales went up by seven at 8-1 in the final stanza and did not allow Wesleyan closer than five the rest of the set, while hitting at a .333 clip. A balanced offensive attack helped the Wildcats to an 15-7 lead. A pair of Johnson & Wales miscues cut the margin to five at 15-10. The margin teetered between eight and five the rest of the way,  but kills by Leidhold and Frank ended the match at 25-19 for the Wildcats.