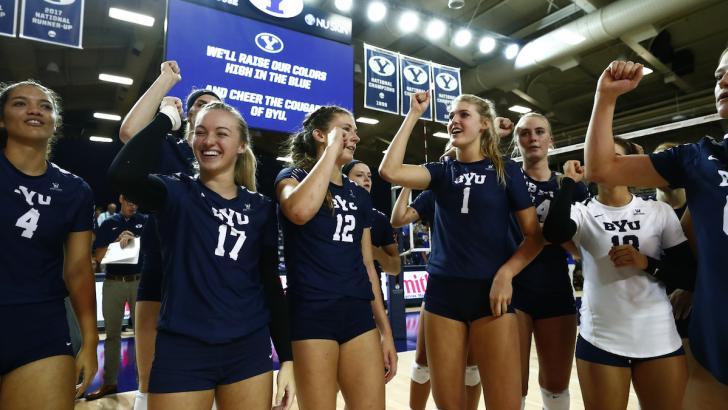 Junior outside hitter Veronica Jones-Perry racked up a match-high 25 kills to lead No. 17 BYU to a five-set road win against instate rival No. 14 Utah.  Archive Photo via BYU Photo / Jaren Wilkey

SALT LAKE CITY – Junior outside hitter Veronica Jones-Perry racked up a match-high 25 kills to lead No. 17 BYU to a five-set road win against instate rival No. 14 Utah.

Utah took the opening set, but BYU took the next two before finishing the marathon match with an 18-16 win in the tiebreak.

Utah led Set 5 early at 3-1, but the Cougars answered with four of the next five points. BYU upped the lead to three at 12-9 on a kill by sophomore outside McKenna Miller. Utah knotted the score at 12 with a kill and a block by senior middle blocker Tawnee Luafalemana. BYU had the first chance at match-point at 14-13 after a freshman middle Kennedy Redding kill. Utah thwarted that attempt and two more, before the Cougars finished off the upset with kills by Jones-Perry and senior setter Alohi Robins-Hardy.

Four Utes managed double-double kill efforts with a fifth right behind. Freshman outside Dani Barton led the way with 15 putaways, while senior outside Adora Anae (13), senior outside Carly Trueman (12) and junior middle Berkeley Oblad (10) followed. Luafalemana chipped in nine kills. Barton put up a a team-best seven blocks, while Oblad and Luafalemana added six each. Oblad also hit at a team-best .409 clip, while Anae rounded out a double-double with 12 digs. Freshman libero Kristen Abels managed a team-best 13 saves.

Utah jumped out to a 6-1 lead in Set 1 behind two Anae kills and an ace by Brianna Doehmann. BYU cut the margin to three at 6-3 and 7-4, but would get not closer as the Utes ran away with the set. The Utah advantage at eight at 20-12. The Cougars were within six at 22-16, but Utah ended the set with a 3-0 run, including kills by Barton and Anae and another Doehmann ace. The Utes hit at a .405 clip in the stanza.

Errors plagued the Utes in Set 2 as the team hit just .034 with eight miscues as well as four service errors. BYU committed just one hitting error in the set for a .370 effort. The Cougars cruised to a 12-4 lead, but led by nine at 14-5 midway through. A pair of Barton kills cut the margin to six at 16-10, but BYU closed out the win with a 9-3 run. A Cosy Burnett kill accounted for the final blow.

Miscues again were a problem for Utah in Set 3 as the team committed seven hitting errors and another four from the service line. For its part, BYU hit .355, with just three hitting errors en route to the win. The Cougars snapped an early 4-all tie with an 8-2 run including five Ute errors. Trailing by eight at 15-8 and later 20-12, Utah narrowed the gap to six at 20-14 on a Trueman kill and BYU miscue, but would get no closer. A Barton kill stopped the Cougars on their first set point try at 24-16, but were done in by a service error two plays later.

The teams split the first 10 points of Set 4, before Utah slowly built a five point lead at 13-8. Two Trueman kills and two stuffs by Luafalemana put the Utes up 13-8. Three straight blocks, including two by Oblad, pushed the edge to 16-9. BYU was within four at 17-13, but could not stop the Ute attack. Kills by four different players gave Utah a set-point try at 24-18. Luafalemana kept the match going by giving the Utes the 25-20 victory. Eight hitting errors stalled the Cougars in the set, while seven blocks aided the Utah effort.

Utah cruised to a first-set victory, outhitting the Cougars .405 to .360 and taking the frame 25-16. Adora Anae led the way with six kills and Bailey Choy assisted on 18 of Utah’s 19 kills in the set. BYU came back to notch the match at 1-1 with a 25-13 winner. Utah totaled just nine kills in the set and BYU’s defense limited the home team to a hitting percentage of .034.

Utah came back to register a .344 hitting percentage in the third set, but it wasn’t enough as BYU took the frame 25-17. BYU opened the set with a 3-0 run and later used a 7-2 run to push its lead to 16-8. Both teams would trade points until back-to-back BYU points made it a 22-14 game. BYU closed out the set winning three of the final six points to take the set.

Utah pushed the match to a decisive fifth set after winning the fourth frame, 25-20. After trading points to open the set, Utah call and early timeout, which led to a 9-4 run and an 11-7 lead. BYU called timeout, but the Utes followed with another run to extend the lead to 16-9. The Cougars called its final timeout of the frame and countered with runs of 5-1 and 5-3, but a kill from Tawnee Luafalemana sent the match to a fifth set with a kill.

The fifth set would go back-and-forth, with the Cougars leading by as many as three points, up 12-9, but Utah’s 3-0 run notched the frame at 12-all. BYU and Utah would trade point-for-point over the next few serves, but the Cougars won the final two points to take the set 18-16.

“I liked our effort a lot and I liked that we were able to come back,” said Utah head coach Beth Launiere. “I thought we started out playing great volleyball. Everything was clicking obviously. I liked how we came back in sets four and five a lot. I thought it showed a lot about our team and different people were able to come up for us, which is something that I think is a sign of our team as we are continuing to grow.

“We have different players that can come up in different situations for us. Dani got hot and played huge for us when Adora was struggling there for a little bit. Berkeley really made a change when we adjusted our block a little to stop their outside hitter. Both Berkeley and Tawnee both did a nice job on that. We made some nice adjustments but sets two and three were rough, but we responded.”

Utah dropped to 8-2 with the loss, snapping a seven-match win streak in the process. BYU improved to 9-1 with the win. BYU leads the all-time series 70-30 in what was the 100th meeting between the two teams.

The Utes totaled 67 kills and hit .259 on the evening, and despite out-blocking the Cougars 13.5 to 7.0, BYU managed to outhit the Utes with a .277 hitting percentage. Utah totaled four aces on the evening, but committed 14 service errors on the night.

Anae finished the evening recording her fourth double-double of the season, notching 13 kills and 12 digs. Trueman added 12 kills and Berkeley Oblad chipped in with 10 kills for the Utes. Oblad and Luafalemana tallied six kills each.

Bailey Choy set a new season-high with 54 assists and Kristen Abels led the Utes with a season-high 13 digs.

Utah is back in action again tomorrow night when they close out non-conference play at Utah Valley. First serve between the Utes and Wolverines is set for 5 p.m. MT at Lockhart Arena in Orem.

The pin-hitting duo of Veronica Jones-Perry and McKenna Miller led No. 14 BYU women’s volleyball past rival No. 16 Utah in five sets (16-25, 25-13, 25-17, 20-25, 18-16) Thursday night at the Huntsman Center to claim the Deseret First Duel title.“I thought we played great,” BYU head coach Heather Olmstead said. “I thought we were doing exactly what we wanted. That’s volleyball. It’s going to go either way. I’m so proud of our girls. We did a good job of distributing the ball tonight and getting our hitters in rhythm.”

Jones-Perry led the Cougars with 25 kills while Miller added 15. Alohi Robins-Hardy and Lyndie Haddock each set the team with 28 and 15 assists, respectively, while Mary Lake collected 23 digs. Kennedy Redding had five blocks and Sydnie Martindale had a career-high nine digs. Sara Hamson came off the bench, collecting seven kills on a .412 clip in the win.

Utah (8-2) took a 3-1 lead to begin the decisive fifth set against BYU (9-1), but the Cougars scored the next three points, capped off by a Miller ace, to go up 5-4. Three more points from BYU put it ahead 8-6, and the Cougars won a video-replay challenge to stay ahead by two at 10-8. BYU led by three, 12-9, after a Miller kill, but the Utes scored the next three to tie it at 12-all. The Cougars had four match points before a Robins-Hardy overpass kill ended the set and match 18-16.

Jones-Perry got the first point of the match for BYU, but Utah scored the next six-straight to take a 6-1 lead in the first set. The Cougars cut the lead to three at two different times, but the Utes stayed ahead 14-7 on a block. A kill from Miller helped BYU get back within six, down 18-12, but it wasn’t enough as Utah ended on a 3-0 run to take the set 25-16.

Back-to-back kills from Hamson helped propel the Cougars to a 7-0 rally and a 12-4 advantage to begin the second set. BYU led by as many as nine at 15-6 before the Utes went on a 3-0 run to cut the lead to six at 15-9. Consecutive Miller kills extended the Cougar lead back to eight, 19-11, before a Cosy Burnett kill gave BYU the set 25-13.

The Cougars took a 3-0 start in the third set after a pair of Jones-Perry kills. The lead was extended at 9-5 after consecutive Miller kills and then to 12-6, aided by three-straight Utah errors. A kill from Jones-Perry gave BYU a 17-9 lead, and a Hamson kill made it 21-14. A Ute service error gave the Cougars the set 25-17.

The two teams traded points to begin the fourth set as a Hamson kill evened the score at 7-7. The Utes scored the next five-straight points to go up 12-7, and three-consecutive Utah blocks extended the advantage to seven at 16-9. BYU countered with a 4-1 run to get back within four, down 17-13, but the Utes rallied with the next three to make it 20-13. Utah eventually won the set 25-20 on a kill, sending it to the decisive fifth set.

The Cougars return to the Smith Fieldhouse Friday, Sept. 15, at 7 p.m. MDT, playing host to Weber State. The match will be televised live on BYUtv. Links to live stats and a video feed can be found on the BYU women’s volleyball schedule page.