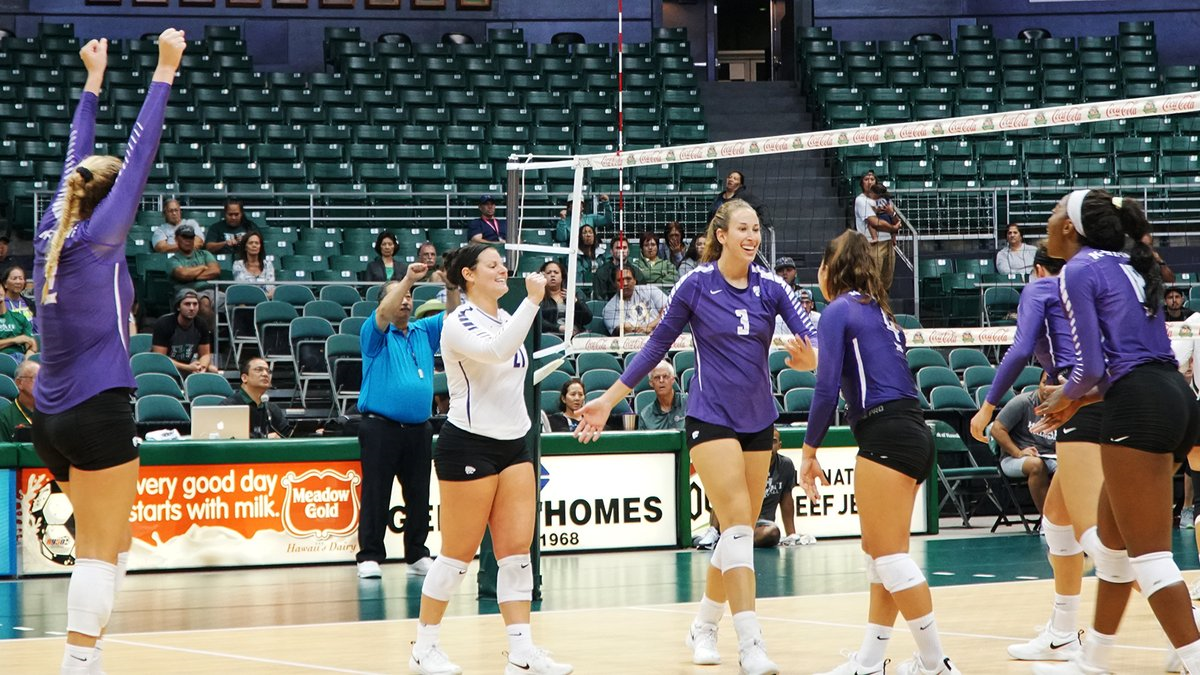 After dodging a shot from Mother Nature and Hurricane Lane, Kansas State and Hawaii got down to the business of volleyball with one match each on Saturday and Sunday. The Wildcats won both via sweep.  Current Photo via Kansas State Athletics

After dodging a shot from Mother Nature and Hurricane Lane, Kansas State and Hawaii got down to the business of volleyball with one match each on Saturday and Sunday.

The teams were originally to be part of the Hawaiian Airlines Rainbow Wahine Invitational, which was cancelled after UCLA and Gonzaga decided not to make the trip due to weather concerns. Kansas State was already on the island and the teams decided to wait out the storm and salvage opening weekend.

In the end, it was a closed match on Saturday due to staffing concerns and a traditional match on Sunday that made up the weekend slate.

Stat Leaders: Kylee Zumach had a standout offensive effort with 19 kills, while hitting .364 and adding eight digs and a team-best two blocks. Alyssa Schultejans (11) and Peyton Williams (9) followed. Williams hit at a team-high .444 clip, while Devan Fairfield paced the defense with 16 digs.

McKenna Granato registered a 14-kill, 11-dig double-double to kick off the season for Hawaii. Casey Castillo also reached double-digit kills with 11, while Norene Iosia and Sarah Liva added eight putaways apiece. Liva hit at a team-best .462 clip, while Iosia was one of four players with double-digit digs, posting 10. Tita Akiu (15) and setter Faith Ma’afala (12) rounded out the group. Ma’afala finished off a double-double with 30 assists.

It Was Over When: Down 10-6 in Set 3, Kansas State battled back with four straight points, including three kills in a row by Zumach, to knot the score at 10. The Wildcats finally broke through with an 8-2 run, turning a 14-12 deficit into a 20-16 advantage. Zumach, Williams and Gloria Mutiri downed two kills each in the rally. A Granato kill slowed K-State momentarily, but Kansas State scored four of the next six to put the match out of reach at 24-19. Iosia prolonged the match with a kill, but Zumach answered to end the night.

Key Stats: Twelve blocks, including seven by Macy Flowers, helped lift K-State to a second sweep in Honolulu. The Wildcats outblocked the Rainbow Wahine 12-6, outhit them .252 to .174 and served up two aces. Hawaii boasted the advantage in digs (61-45) and kills (45-44). K-State book ended the match with a .375 hitting effort and a .324 clip.

It Was Over When: A 7-1 run with four Hawaii errors and two Zumach kills put K-State up 13-9 in Set 3. The Rainbow Wahine were never able to catch up after that. Two Schultejans putaways and a Flowers ace pushed the lead to six at 18-12. The Wildcats held Hawaii at least four points away the rest of the way. Three Zumach putdowns set up match point at 24-17, but it would take three more tries to close out the match. An Iosia kill and Zumach miscue kept things going before Flowers closed the door with her seventh putaway.