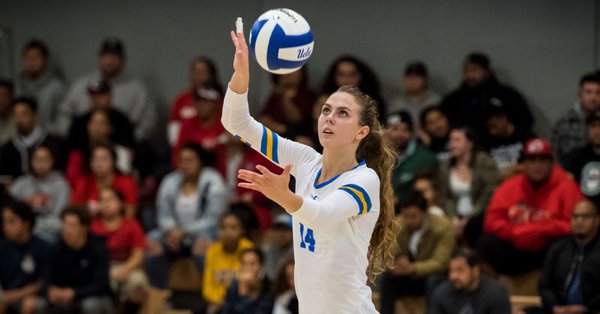 No. 12 UCLA and Gonzaga decided to avoid Hurricane Lane and stay on the mainland instead for a pair of contests to open the 2018 season. The Bruins won both matches in four sets behind Mac May's offensive prowess and Zana Muno's defense. Current Photo via UCLA Athletics

No. 12 UCLA and Gonzaga decided to avoid Hurricane Lane and stay on the mainland instead for a pair of contests to open the 2018 season.

Both teams were originally slated to join Kansas State and Hawaii in Honolulu for the Hawaii Airlines Rainbow Classic. Instead, they opted for a two-match series in Westwood beginning Saturday.

The Bruins won both matches in four sets.

Stat Leaders: Mac May (14), Jenny Mosser (13) and Madeleine Gates (10) paced the Bruins offensively in the season opener. Gates hit at a .643 clip with just one error in 14 swings, while Mosser served up four of the team’s nine aces. Zana Muno pulled up 25 digs, while Kyra Rogers, Devon Chang and May notched three blocks apiece.

Sarah Penner was tops among the Zags with 14 kills and 10 digs. Kaylie Loewen tacked on nine kills on a team-best .400 hitting effort (9-1-20). Katelyn Oppio served up four aces and added in six kills.

It Was Over When: After falling behind 17-15 in Set 4, UCLA surged with eight of the next 10 points to go up 23-19. Two solo blocks by Chang and an ace by May highlighted the rally. A service error gave the Bruins their first match-point try at 24-20. A kill by Chapin Gray and a hitting error kept Gonzaga in the game at 24-22, before Mosser closed the door at 25-22.

Stat Leaders: Jenny Mosser and Mac May registered 19 and 17 kills apiece to top the offensive ledger. Mosser rounded out a double-double with 14 digs and six blocks, while May hit .349 and chipped in eight digs and two aces. Madeleine Gates put up a team-best eight blocks and downed nine kills. Zana Muno pulled up 22 digs.

Chapin Gray starred for Gonzaga with 16 kills and three blocks, while Sarah Penner just missed a double-double with 12 kills and nine digs. Katie Oppio was the top blocker in the match with nine stuffs to go with nine putaways. Perry Ramsey added six blocks. Setter Jenna Kuehn was the dig leader with 22 to go with 36 assists.

It Was Over When: A 10-3 run turned a 6-all tie into a 16-9 advantage for the Bruins in Set 4. May and Rogers downed two kills apiece while three errors stung the Bulldogs. Gonzaga would get no closer than five the rest of the match, last at 23-18. A kill by Hawley Harrer and a stuff by Mosser and Gates sewed up the victory.