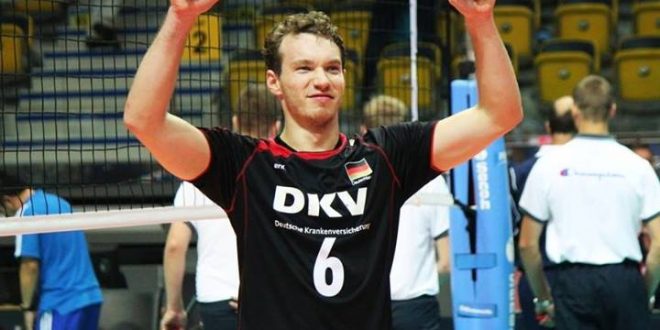 Noone is irreplaceable. German outside hitter Denis Kaliberda found that out the hard way as he was phased out and... Current Photo via FIVB

Noone is irreplaceable. German outside hitter Denis Kaliberda found that out the hard way as he was phased out and eventually had his contract with Turkish team Ziraat Bankasi terminated just before the playoffs began at the end of February.

For Kaliberda, who averaged 11 points per match for Ziraat, the beginning of the end came as Italian outside Oleg Antonov joined the team on Feb. 1, after previously starring for Tonno Callipo Caliabria Vibo Valentia.

Another factor in his diminished play came with the return of Polish opposite Bartosz Kurek and attacker Vojin Cacic of Montenegro, who both are back on the roster after injuries.

The 27-year old Kaliberda has reportedly returned home to Germany. In addition to helping Ziraat to a fourth-place finish in the Turkish National Cup race, the German earned a bronze in CEV Champions League play with Cucine Lube Civatanova in 2016-17, where he was named Best Outside Spiker.

Kaliberda also played for the German national team in 2017 in both the European Championship, which brought a silver medal, and World League Group 3 play, in which the side earned bronze.

Ziraat Bankasi is in the midst of the Efeler Ligi play, ranking fourth with 46 points behind Halkbank (58), Arkas Spor (49) and Fenderbahce (47)