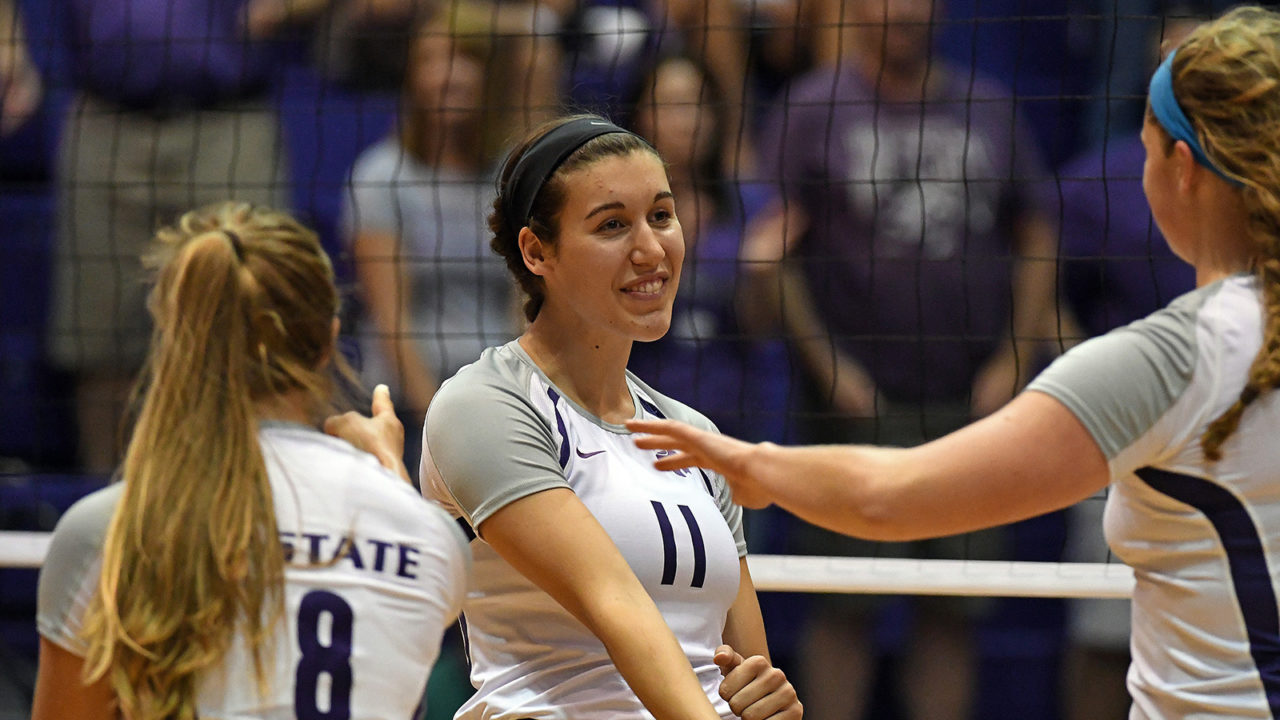 The Kansas State Wildcats outlasted the Oklahoma Sooners in five as freshman middle blocker Peyton Williams scored three of the match’s final five points on kills to seal the victory.

“I thought we played great when we had to play great,” said head coach Suzie Fritz. “There’s a John Wooden quote that says something to effect of, ‘be at your best when your best is required.’ I think we were at our best when our best was required.

In addition to her 11 total kills on the night, Williams led the Wildcats’ net defense with a career-high seven blocks. Junior outside Alyssa Schultejans paced Kansas State offensively with 12 kills and also recorded a career-best four blocks at the net. Sophomore setter Sarah Dixon posted her fifth double-double in the last six matches (30 assists, 11 digs).

For the Sooners, junior outside Madison Drescher led all players with a career-high 25 kills, hitting at an impressive .400 clip on 45 swings. Sooner junior Audrey Alford recorded 50 assists, including the 2,000th of her career, making her the ninth player in program history to achieve that milestone.

With Kansas State leading 15-13 in the opening frame, Oklahoma went on an eight-point scoring run and eventually took the set 25-19. The Wildcats answered in the second, hitting at a .414 clip to to win by a comfortable 25-16 margin and even the match at a set apiece.

The third frame featured six ties and three lead changes, but the Wildcats took three of the set’s final four points to win 25-20. Oklahoma dominated in the fourth on .400 hitting while holding Kansas State to a .114 hitting percentage. Drescher notched six kills on nine attempts in the fourth frame alone.

Kansas State plays in-state rival #9 Kansas on Sunday, while Oklahoma travels to Iowa for a Saturday tilt against #19 Iowa State.

Cats Pull Through in Five Sets in Big 12 Opener

With the set level at 6-6, Williams helped spark the Cats’ 9-2 run with three kills on three swings to go along with two blocks in Set 5. Kylee Zumach, who matched Williams’ 11 kills on the evening, had a pair of kills on six swings without an error in the final frame.

“I thought we played great when we had to play great,” said head coach Suzie Fritz. “There’s a John Wooden quote that says something to effect of, ‘be at your best when your best is required.’ I think we were at our best when our best was required. There are ebbs and flows still at this point in time. We had to hit for a pretty high efficiency to keep ourselves in the match. We are still trying to find a greater defensive sense of urgency that allows us to score points faster.”

Williams finished the night with a .391 (11k-2e-23ta) attacking percentage and a career-high seven blocks. Outside hitter Alyssa Schultejans’ four blocks were a career best, helping the Wildcats to a 9.0-5.0 edge in total team blocks.

“She was really good,” Fritz said of Williams’ performance. “In combination with that, Alyssa Schultejans and Brynn Carlson both hit for a high efficiency for us, too. Peyton, down the stretch, made a couple of really, really good volleyball plays: touched and controlled some balls at the net that we were able to then transition quick back to her. That’s really good volleyball.”

Six Wildcats ended the night with at least five kills, paced by Schultejans’ 12 which she hit at a .286 clip. Elle Sandbothe and Bryna Vogel each had nine kills while hitting over .400.

Redshirt sophomore setter Sarah Dixon posted her fifth double-double in the last six matches, as she led the Cats with 30 assists and 11 digs. Vogel, the team’s lone senior, was second with 10 digs.

Oklahoma held a 67-59 edge in total kills, thanks to a career night from junior outside hitter Madison Drescher and her 25 kills hit at a .400 clip.

Behind a .414 attacking efficiency, the Cats took control early in a 25-16 second-set win. Sandbothe had three kills on three swings to help K-State to an early four-point lead. Schultejans had four kills without an error in the set while the Wildcat defense posted three blocks, led by Williams who posted two of her seven blocks in the set.

Set 3 saw six ties and three lead changes, as a 4-1 K-State spurt broke a 14-14 tie and gave the Cats a lead they would never relinquish. Oklahoma got as close as two points at 22-20 but K-State closed by scoring three of the set’s final four points to take a 2-1 match lead. In the game, four Wildcats registered a team-high three kills in the game to help K-State tally 15 as a team.

Oklahoma responded with a resounding 25-13 Set 4 win, courtesy of 18 team kills to only four errors (.400) while holding K-State to a match-low .114 (8k-4e-35ta). Drescher added a half dozen more kills for the Sooners to up her career-high total to 22 entering the final set.

The Wildcat defense collected its second straight five-set win of the season and their sixth victory over the last eight matches. K-State won its conference-opening match for the second straight season.

K-State returns to Ahearn Field House on Sunday, September 24 for the season’s meeting with in-state rival Kansas. The Dillon’s Sunflower Showdown will start at noon and will air nationally on ESPN2. Fans can also listen to Rob Voelker call the action on KMAN 1350 AM, 93.3 AM and streaming live on k-statesports.com.

NORMAN – The University of Oklahoma volleyball team was narrowly defeated, 3-2, by Kansas State in its first Big 12 match of the season on Wednesday night at McCasland Field House. The Sooners fell to 3-10 overall, while the Wildcats improved to 8-6.

In the first, OU trailed 15-13 at the media timeout. The Sooners immediately went on a 4-0 run to take a two-point lead and force the Wildcats to call a timeout. On the serve of junior outside hitter Alyssa Enneking (League City, Texas), the Sooners increased their run to 7-0 and led 20-15 when Kansas State burned a second timeout. Oklahoma won the set on a block from junior outside hitter Morgan Miller (Magnolia, Texas) and freshman middle blocker Paige Anderson (McKinney, Texas).

The Wildcats hit a collective .414 in the second as four players recorded three or more kills in the set. The Sooners fell behind 6-1 early in the third before coming back to tie the set at 9-9, but K-State gained its separation late in the set.

Oklahoma was at its best in the fourth; outhitting Kansas State, .400-.114. Junior outside hitter Madison Drescher (Southlake, Texas) tallied six kills on nine attempts in the set. Drescher led all players with 25 kills, a career-high, as she hit .400 for the match.

Enneking was second for OU in kills with 16 to go with 20 digs as she recorded her team-leading fifth double-double of the season. Miller chipped in with 13 kills.

OU junior setter Audrey Alford (Norman, Okla.) dished out 50 assists, including the 2,000th of her career. She is the ninth player in program history to reach the milestone. Alford added nine digs and three kills.

The Sooners hit the road this weekend to face Iowa State on Saturday at 4 p.m.