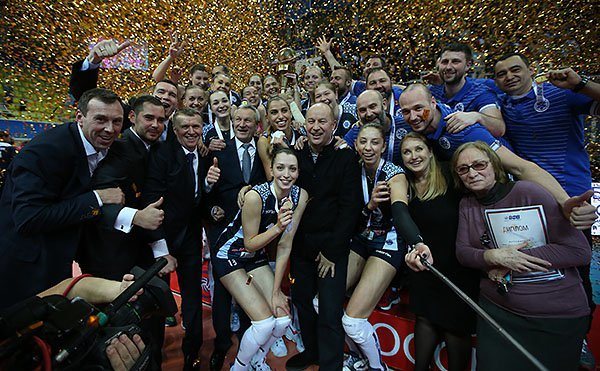 Just like their Tatar opposites from Zenit Kazan did in the men’s Russia Cup two weeks ago, the women of Dinamo... Current Photo via Dinamo Kazan

Just like their Tatar opposites from Zenit Kazan did in the men’s Russia Cup two weeks ago, the women of Dinamo Kazan came away with a 3-1 win in their edition of the Cup of Russia this week. In a dynamic and exciting final, they topped their rivals from Dinamo Moscow for the victory.

Daria Isaeva led Kazan with 24 points in the championship game, including 23 kills (with 59% efficiency), followed by middle-blocker Irina Zaryazhko with 19 – including 8 blocks. Natalia Goncharova led Moscow with 16 points.

“To some extent, yes (this was a historic victory,” Dinamo Kazan coach Rishat Gilyazutdinov said. “Our past history imposes a certain expectation. And today we have proved that the team “Dinamo-Kazan is a formidable force, and has the ability to fight for all the titles of the season.”

This is the 3rd Russian Cup title for Dinamo Kazan in just 14 years in existence, and first since 2012. Those 14 years have been a roller-coaster for the club: they rose to the Superleague in a hurry, but struggled financially in 2008 and the club nearly dissolved. Shortly thereafter, though, they signed a huge portion of the Russian National Team, along with American star Jordan Larson, and built themselves back to a national and global power. The team won the 2014 European Champions League and then the Club World Championship as well, and are the three-time defending Russian Super-League Champions.

Highlights of the game, and post-game interviews, are below: