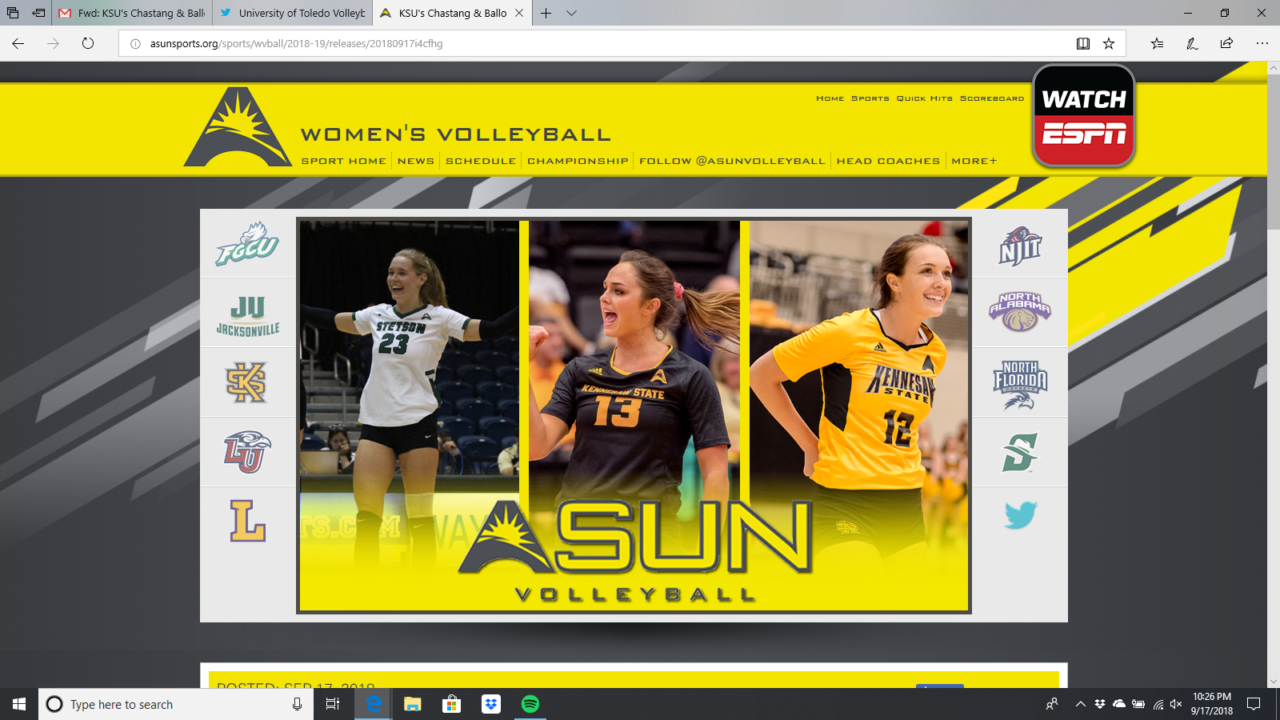 Chastang captures her second Player of the Week honor in three weeks after an impressive showing at the Troy Classic last weekend. The sophomore outside hitter recorded 41 kills over three games at Troy to help her earn the tournament’s MVP award. For the week, Chastang tallied 60 total kills, including a career-high 19 in a five-set loss to Auburn. She brought her game on the defensive end as well, registering 38 digs and 10 total blocks. This season, Chastang leads the ASUN in kills with 183 and sits third in kills/set at 3.39.

Not a bad week for @lauren_chastang who earns her second ASUN Player of the Week award of the season! #GoldStandard pic.twitter.com/ifYLl9GIFN

Deisa’s school record-setting performance helps her earn her first career Defensive Player of the Week award. The Latvia native broke the Stetson single-match rally-scoring era (2001-Pres.) record for digs with 35 in the Hatters’ five-set winner over Chicago State. For the weekend, she recorded 64 digs and an average of 4.57 digs/set. Deisa also chipped in offensively with two double-digit kill matches and 36 total kills for the week.

Dani Ballou earns her first-ever Freshman of the Week honor. The Clearwater, Fla. native totaled 28 kills last week for Kennesaw State, helping the Owls to a 3-1 record. In KSU’s mid-week match with Auburn, Ballou set a career-high in kills with 10.

A career-high 10 kills against Auburn was only the start for @danielleballouu on the way to her first ASUN honor! #GoldStandard pic.twitter.com/UZVHvgOUNi

Players of the Week

Lauren Chastang, Kennesaw State
Sophomore | Outside Hitter | BayMinette, Ala. | Business
– Second Career ASUN Player of the Week Award; second this year
– Recorded 60 kills and 3.33 kills/set and earned MVP of the Troy Classic
– Brought it on the defensive end, recording 38 digs and 10 total blocks
– Leads the ASUN in kills with 183 and is third in kills/set at 3.39

Eva Deisa, Stetson
Junior | Outside Hitter | Jurmala, Latvia | Digital Arts
– First Career ASUN Defensive Player of the Week Award
– Set the Stetson single-match record for digs with 35 against Chicago State
– Registered 64 total digs and an average of 4.57 digs/set over the weekend
– Offensively recorded 36 kills and 2.57 kills/set in the Hatters’ 2-1 weekend