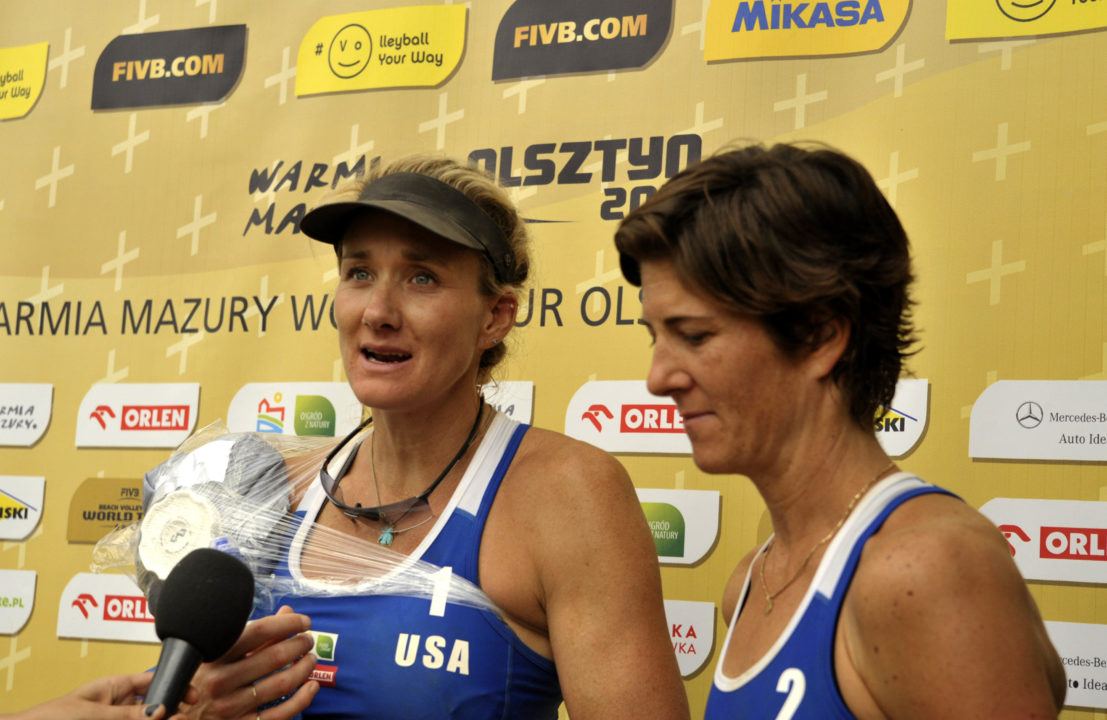 Walsh-Jennings says that her status for the World Championships depends on how she feels over the next week. Current Photo via FIVB

Three-time Olympic and World Champion Kerri Walsh-Jennings suffered a shoulder injury on Saturday while playing in the semi-final of the Olszyn 4-star event in Poland.

In am event that for most pairs is serving as a final tuneup for next weekend’s World Championships in Austria (July 28th-August 6th), Walsh-Jennings had the worst thing that can happen so close to a World Championship – injury.

Playing with her new partner Nicole Branagh, the 38-year old Walsh-Jennings stopped play at 14-14 in the 3rd set  team’s semi-final match against Canada’s Melissa Humana-Paredes and Sarah Pavan. After a 5-minute medical timeout, the Canadians scored the final two points to win 2-1 (21-13, 19-21, 16-14).

When asked about how the injury would impact her plan for next week’s World Championships, Jennings said “we’ll see.  A lot depends on how I feel in the next few days.”

Jennings said after the match that she dislocated the shoulder again, but that the pain “isn’t that bad.”

The injury occurred when Walsh dove for the ball with her right arm and twisted her hand in the sand. That’s the same shoulder that Walsh Jennings dislocated at the Moscow and Gstaad World Tour events in 2015. That injury led to surgery in September of that year, though she would recover in time to qualify for and win bronze with April Ross at the 2016 Olympic Games.

Walsh-Jennings and Branagh forfeited the bronze medal match of this weekend’s tournament, which gives that spot to Brazil’s Agatha/Duda.

In her post-match interview, Walsh-Jennings’ shoulder was heavily wrapped with an ice pack. She is going to Hamburg to receive treatment in preparation for Vienna.

Larissa/Talita will battle Humana/Paredes in the final, which will be played on Sunday.