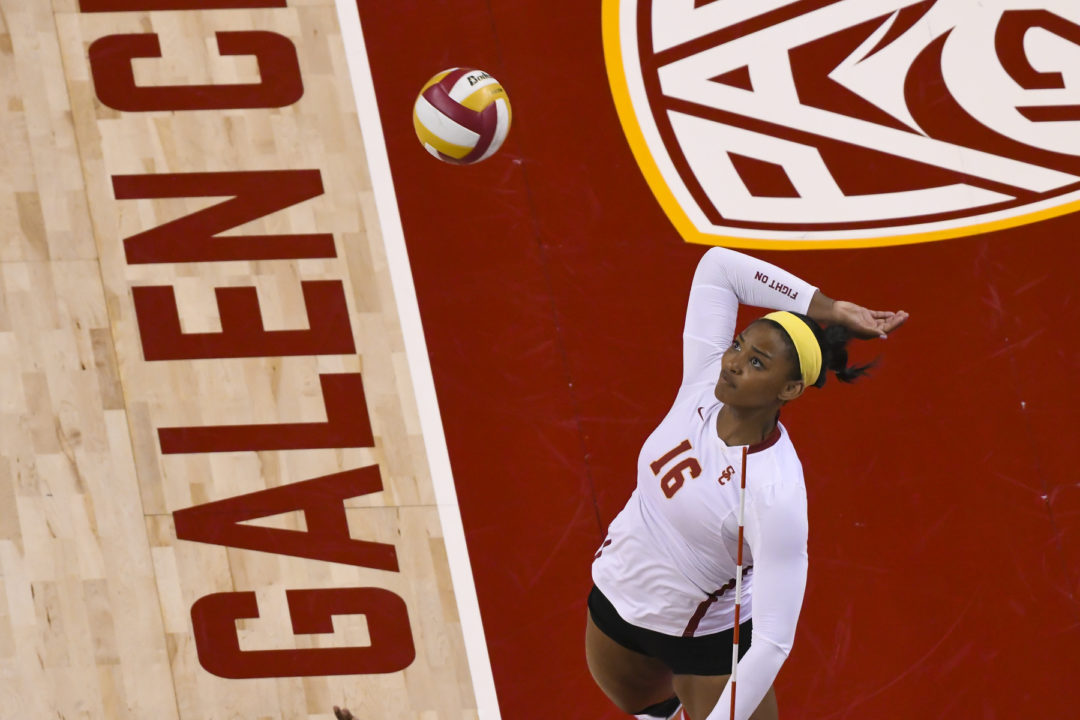 Khalia Lanier knocked down 20 kills to combine with a strong serve as #10 USC swept #7 Minnesota for a spot in the Regional Final. Archive Photo via USC Athletics

It wasn’t a huge upset that #10 USC downed #7 Minnesota, but what was a bit shocking was that the Trojans accomplished the feat in straight sets. The result is that the Golden Gophers aspirations of a third straight Final Four come to an end while USC earns their second trip to the Regional Final in the last three seasons.

Maybe the most indicative team stat of the match was serving though, as USC was not only the more aggressive serving team (6-0 in aces), but they were more accurate with zero serve errors to four for Minnesota. Standing alone, that statistic indicates a 10 point swing. Beyond just the numbers, there were plenty of USC serves that completely dismantled a Minnesota possession and helped USC overcome a size disadvantage by making things easier for their back row defense.

In the opening set, USC landed the first big hit with a 6-0 run to lead 9-5, but Minnesota quickly countered with a 4-0 spurt to even things at nine. Those back-and-forth battles would be a theme for the inaugural two sets. As that trend continued, Minnesota used a 3-0 run to tie at 22 with a Molly Lohman (six kills, .400, six blocks) and Brittany McLean block. However, USC found itself with the late lead with back-to-back Khalia Lanier (20 kills, .280, nine digs) kills to make it 24-22. There would be plenty more of those, but it was Brittany Abercrombie (11 kills, .286, two aces) picking up where Lanier left off with a set-ending kill at 25-23.

The biggest difference in that first set may have been the strong serve for USC, as they had three of their aces (with zero serve errors) while Minnesota logged zero aces (to three serve errors). For Minnesota, they flexed their advantage in the second: blocking. Minnesota broke through behind that block as Regan Pittman (eight kills, .286, five blocks) and Stephanie Samedy (13 kills, .270, seven digs, four blocks) combined for a stuff to tie at 20 before the Golden Gophers went up 21-20. Sure enough, it was USC’s turn to counter with an offense that hit .314 in the second set, but Minnesota fought off two set points and went in front 25-24. Again the Trojans wouldn’t be outdone and grabbed three of the next four before Lanier put down another kill to earn a 2-0 set lead.

The Trojans weren’t thwarted by the time off in the intermission, as they jumped in front 10-5 in the third. A 3-0 Minnesota run was responded to by four of five for USC to go up 14-9. They could seemingly sense the finish line was encroaching too, as Minnesota never gave up but just didn’t have it on this night with USC rolling to a 25-16 final set victory. It was Reni Meyer-Whalley (27 assists, nine digs) connecting with Abercrombie for that final point and nail in the coffin.

Beyond Lanier’s stellar performance, USC saw a breakout match from freshman Brooke Botkin, who logged 14 kills on a .344 clip to go with six digs. Victoria Garrick was also fantastic in the back row as she totaled 20 digs for the match.

The senior class for Minnesota featuring libero Dalianliz Rosado (17 digs), Lohman and company won’t be forgotten for Minnesota – especially in helping the team make the 2015 and 2016 Final Four as well as this year’s Sweet 16. Overall, it was another strong season as things come to a close after a 28-6 year. They’ll have plenty back too with the likes of Samantha Seliger-Swenson (36 assists, eight digs) and Alexis Hart (13 kills) back in the fold.

In one team’s sorrow, another sees celebration as USC had their quickest match in three NCAA Tournament tries against their most stern competition. It’s their second try in the Regional Final in three years now, but they’ll look for a better result this season as the underdog on the road against #2 Florida.