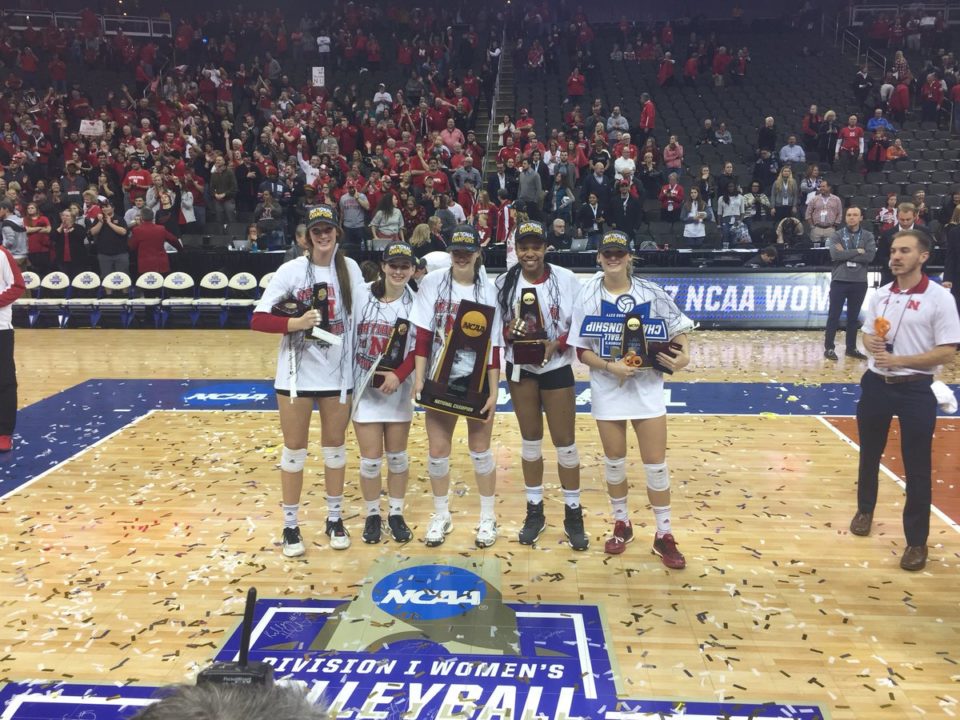 Nebraska defeated Florida 3-1 to claim the National Championship. Check out the post-match comments below: Archive Photo via VolleyMob

The Huskers showed their strengths early in the match and continued it through the match as they earned the victory. Serving strong, passing and a gritty defense led the success – all things that Nebraska made their identity this season. Coach Cook talked about that and this team’s innate ability to have belief and grind even without a star-studded and All-American filled cast.

“I feel very honored and privileged to be around a team and a staff that’s had an unbelievable belief in what we could do. As head coach, sometimes you don’t think — I don’t think we’re very good, but these guys gave everybody an example in the sport of volleyball that you don’t have to have five All-Americans. We started two walk-ons today, Anni and Sydney.

But you saw a team play great team volleyball. I saw coach Pettit had an article called “old-school volleyball.” It was serve, block, dig, and try not to make errors on offense and get a few sideouts. And you saw our serve-blocking defense really frustrated Florida today. That’s what this team has been built on all year. They’ve embraced it, and they’ve had unbelievable leadership from the senior class.”

It wasn’t an easy journey for Nebraska, who faced early season injuries and went 7-3 in the non-conference slate. They had to replace three program legends and a whole coaching staff, but senior setter Kelly Hunter was a pivotal force in leading her team to the title.

“We just grinded and had a lot of stuff to work out with new coaches, new players. You know what, let’s reinvent the culture, let’s reinvent what we have here at Nebraska volleyball. We worked super hard at that during the summer. All throughout the preseason we were figuring out who we are, and opening up the Big Ten, I think we saw who we could be. We just kept working on our side of the court the entire season.

When we’re playing our good volleyball, no one can beat us, so we were just focused on our side no matter what happened, and no matter what the seeds were or anything like that, we played Nebraska volleyball, and it took us all the way to the National Championship and to a win.”

Although the Gators fell in the title match, it was an overall great season for Florida, who made their second ever National Final. Overall, the season featured an SEC Championship, plenty of individual awards, victories and more. That was a resounding theme in the post-match press conferences, including from head coach Mary Wise.

“Congratulations to Nebraska. I thought they played a very clean match. Obviously, they put a lot of pressure on us with both their serving and their backward defense. But we look at this match, and this match will not define the 2017 Gators. There is so much to be proud of in terms of what they accomplished, and on this night as other teams that have played Nebraska in the past month haven’t had much — any better luck either. That’s a very, very well-coached team, very disciplined, that just took care of the ball exceptionally well tonight.”

Florida’s biggest issue in the match was something that haunt them earlier in the tournament but didn’t provide a loss in serve receive. The Huskers are one of the best serving teams in the country too, and senior outside hitter Carli Snyder said that was a big key.

“I think we knew that the serve-pass game was going to be crucial in this match, and they definitely won that game tonight. It puts us in a difficult position trying to play out-of-system balls. They’re a great defensive team and a great blocking team. I think that when that got better, when our passing improved, we made uncharacteristic errors, it is a very tough environment. The grittiest of teams in that environment are going to struggle. And I think that was part of it as well.”

The entire post-match press conference with Wise, Rhamat Alhassan, Snyder and Caroline Knop can be seen below: