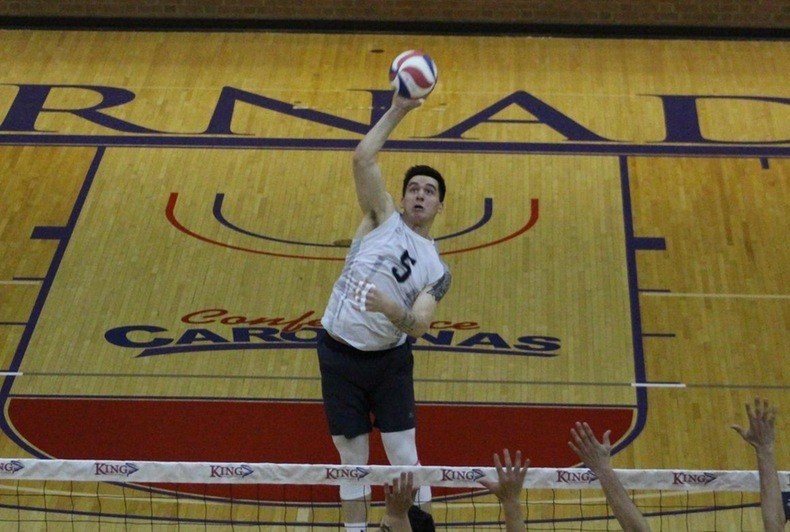 Junior outside hitter Jeff Sprayberry from King University was named as the Conference Carolinas Player of the Year. The Oak Forest, Illinois, native averaged 3.43 kills per set, while hitting at a .263 clip and leading the Tornado to a 28-4 mark. He posted two double-doubles and downed a season-best 27 kills twice, while guiding King to the No. 2 seed in the league tournament and an appearance in the semifinals. Sprayberry is the second Player of the Year in school history and first since Joel Salva (2011).

Mount Olive’s libero Josh Donahue garnered Defensive Player of the Year accolades after posting 2.73 digs per set and guiding the Trojans to a 17-9 mark, including a berth in Saturday’s league tournament final. The Jacksonville Beach, Florida, native is UMO’s all-time digs leader.

Freshman right side Angelos Madilaris nabbed Freshman of the Year honors after leading conference champion Barton to a 22-5 record. The Chalkida, Greece, native averaged 3.45 kills per set, while hitting at a .350 clip. He ranked 10th among conference players with 255 kills, while also adding 1.66 digs per set and a team-best 36 aces.

King head coach Ryan Booher was tabbed as the Conference Carolinas Coach  of the Year after leading his Tornado squad to a share of the conference title, the first in school history. King won 16 league matches, a program best, and guided the program to a 28-4 mark, a 20-win improvement over its 2016 record. Booher’s charges posted a program-record 15 match win streak during the season. Booher was last named Coach of the Year in 2011.

Defensive Player of the Year

Freshman of the Year