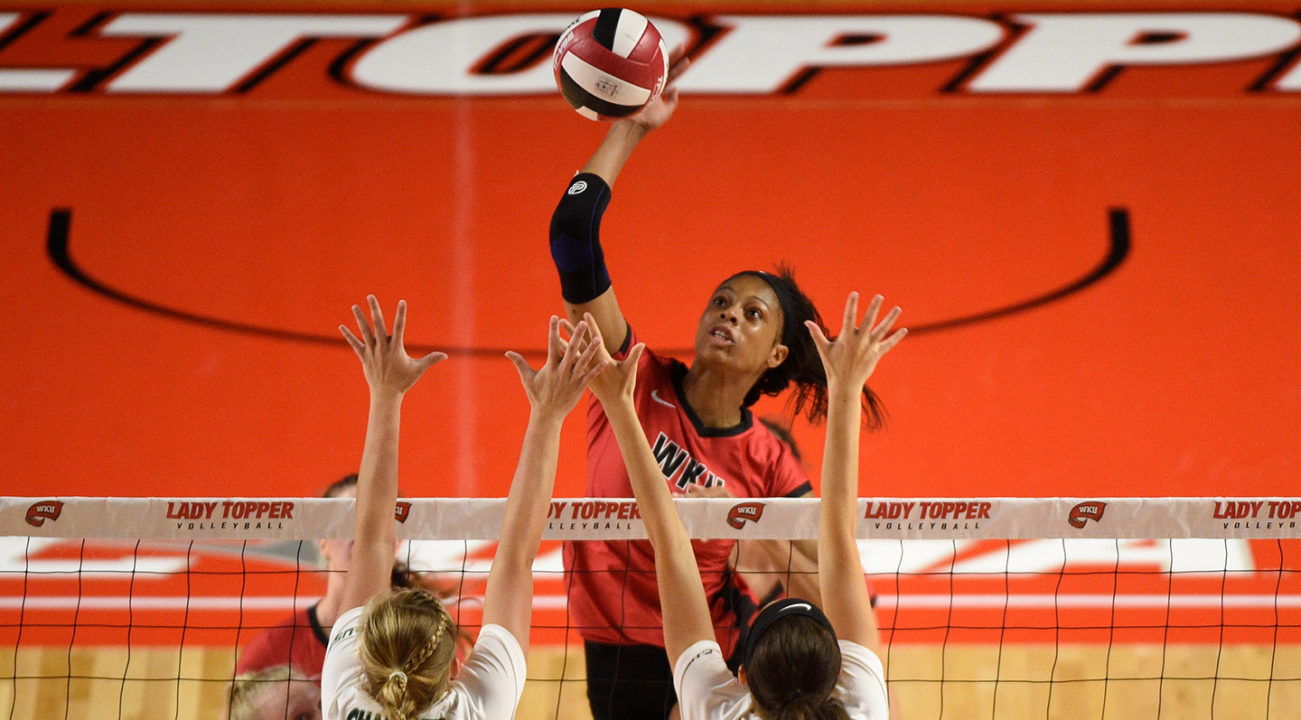 With 20-kill outings from both Rachel Anderson and Lauren Matthews, WKU volleyball improved to 2-0 in Conference USA action with a five-set victory over Charlotte on Sunday, claiming the program's 57th-straight home conference victory. Current Photo via Western Kentucky Athletics 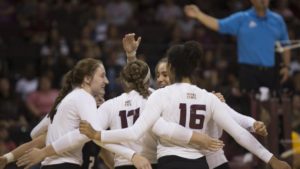 BOWLING GREEN, Ky. – With 20-kill outings from both Rachel Anderson and Lauren Matthews, WKU Volleyball improved to 2-0 in Conference USA action with a five-set victory over Charlotte on Sunday. The Lady Toppers claimed their 57th-straight home conference victory after set decisions of 25-22, 19-25, 25-12, 23-25 and 15-10.

“When we defend pretty well, we’re a good team,” head coach Travis Hudson shared. “Offensively, we were pretty good today, but we just weren’t defending in a quality way. In any sport, it doesn’t matter what sport it is, if you’re not good on the defensive side of the ball, you’re going to be in danger of losing on that particular day, and that’s where we were today, we weren’t great defensively, but we did just enough offensively to find a way to pull it out.”

WKU improved to 11-5 on the season with the five-set victory while Charlotte dropped to 11-7 with a 1-1 mark in league play.

Charlotte came out hot in the opening set, using an early 8-3 run to pull away from WKU with a 12-8 lead. The Lady Toppers regained the lead at 15-14 following a string of five straight points. During the run, middle hitter Anderson rapidly collected kills, finishing with eight in the frame.

Second set action opened with WKU taking a quick 5-2 lead before Charlotte hit double digits first with a 10-9 advantage. From there, the 49ers pushed ahead to a 21-14 lead. WKU worked back within five points of Charlotte, but was unable to close out the set, falling to the visitors 25-19.

Out of the long break, WKU reclaimed its lead in the match with a quick 25-12 set three victory. The Lady Toppers worked at a blistering .455 collective offensive rate while holding Charlotte to a .000 mark.

Looking to push the match to a fifth set, Charlotte hung tough in set and ultimately pulled out the 25-23 decision. Neither side’s lead ever grew greater than three points in a frame that saw 18 ties and nine lead changes. The 49ers racked up 18 kills on a .325 clip in the set while WKU operated at a .273 rate.

Heading to a fifth set for the third time in 2018, WKU answered every Charlotte score. With the 49ers leading 4-3, the Lady Toppers responded with kills from Anderson and Jackson for their first lead in the set. After trading points, Jackson and Matthews teamed up for a block and gave WKU the lead for good at 7-6. Taylor Bebout found the floor for a kill to give the Red and White a two-point lead at the switch. With an 11-10 lead after a Charlotte sideout, WKU closed the match with a 4-0 run thanks to a 49er service error, a Hallie Shelton ace and two kills by Anderson.

“You get to start over with a fresh slate,” libero Payton Frederick said of the fifth set. “We knew we just needed to do what we are capable of and play our game.”

WKU Volleyball is now 3-0 in matches that go the full distance with victories over Notre Dame and Northern Illinois as well.

Anderson and Matthews each registered 20 kills with hitting percentages of .425 and .400 respectively. Jackson finished just shy of double digits with nine kills and a season-best .615 clip.

At the net, Matthews led the way with seven blocks – four solo. Anderson was just behind her with five.

Defensively, Frederick notched a match-high 18 digs for her fifth-straight match in double digits.  Darby Music added 14 digs while Bebout and Emma Kowalkowski each added 11. Sunday’s match was just the third contest of the season in which four or more Lady Toppers finished with double-digit digs.

HUDSON ON THE TEAM HEADING INTO THE FIFTH SET:

“We’ve been pretty good so far, when you get in a fifth set, you have to go play care free and loose. If you tighten up and hesitate, you end up not playing well. You have to let it fly and go for it in that fifth set and try to jump on somebody. We’ve got kids that have been through that and we have some that haven’t. It’s just another step in the growing process for a young team.”

“That streak was in serious jeopardy today, but you hope being at home gives you a little bit of a push, a little bit of an edge, and today these two teams were pretty evenly matched up for the majority of the match, and certainly Diddle Arena gave us a little bit of a boost to get to the end. All that tells me is our fans are incredibly spoiled to win 57 conference matches in a row. I promise you it is a struggle every night, but I’m really proud of the kids for putting something like that together.”

After nine-consecutive matches at home across the past 16 days, WKU Volleyball will hit the road for a Thursday night tilt at Southern Miss. First serve from Hattiesburg, Miss. is slated for 6 p.m. CT.

·        WKU’s win over Charlotte marked the 57th-consecutive victory at home over a conference opponent for the Lady Toppers. The streak dates back to the 2011 Sun Belt days.

·        WKU Volleyball is now 3-0 in matches that go 5 sets with victories over Notre Dame and Northern Illinois as well.

·        Lauren Matthews and Rachel Anderson each notched 20 kills for the first time this season. The last time two Lady Toppers registered 20 or more kills in the same match was November 20, 2016, in the C-USA Tournament Championship match. Rachel Anderson tied the school record with 31 kills while Alyssa Cavanaugh racked up 24 in the five-set victory.

·        Sunday’s match was just the third contest of the season in which four or more Lady Toppers finished with double-digit digs (Notre Dame and Kansas State).

·        WKU’s 13-block effort against the 49ers was one off its season high and just the second time the team finished with double-digit blocks on the season.