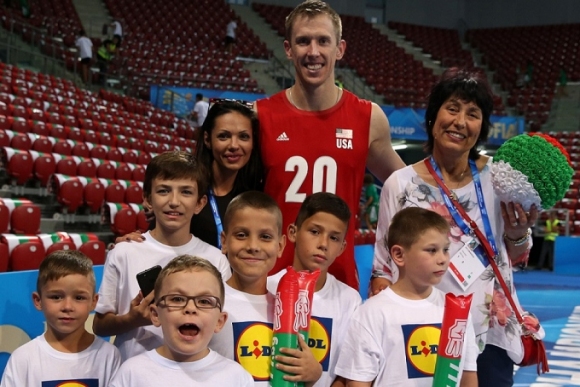 Dave Smith took time after the match against Bulgaria to meet with children who also have hearing impairments.  Current Photo via Sportal.bg

Dave Smith put in a great performance against Bulgaria in a 3-0 sweep on Saturday. While he is a key member of the United States’ team that heads into the Final Round with a perfect 8-0 record, the biggest impact he made on Saturday was probably off of the court. Six Bulgarian children with hearing impairments were in the audience and got the chance to meet Smith after the match.

The children are a part of the I Believe in You Association. The children came to the match in Sofia in order to experience such a large sporting event. After the match, Smith, took time to converse and take photos with the children. Dave Smith was born 80-90 percent hearing loss. The 6-foot-7-inch middle blocker wears hearing aids during matches and also uses lip-reading and hand signals to communicate with his teammates on the court.

While the Bulgarian Volleyball Federation asked Smith for a photo opportunity with the children, he gave much more than that. Smith stayed out to meet with the children long after his team had gone into the locker room. They conversed in sign language, and Smith answered many questions the children had for him.

“How did you get to the national team?” asked a delighted boy who was thrilled to be meeting great volleyball player who shares similar life obstacles. Smith explained with a wide smile to the children how they should pursue their dreams.