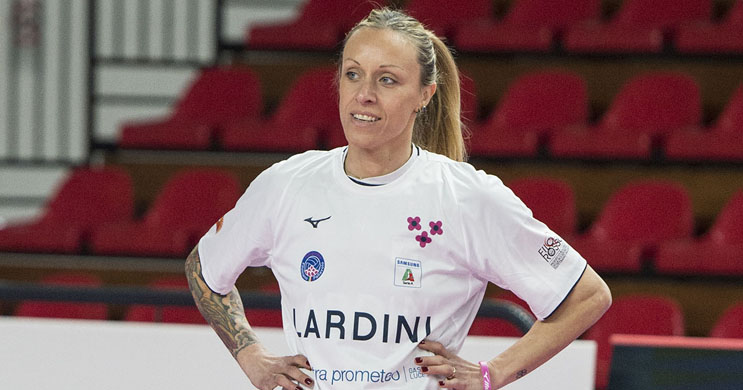 The club was quick to commemorate the news, announcing that she will not leave the squad and instead will join the team's technical staff as an extra assistant Current Photo via Pallavolofilottrano.it

Lardini Filottrano‘s captain, Chiara Negrini, has communicated the club that she is pregnant, according to a report on the club’s official website. Negrini is one of the team’s most important players, having captained it in its A2 title run, which won it a promotion to Italy’s premier A1 league. The club was quick to commemorate the news, announcing that she will not leave the squad and instead will join the team’s technical staff as an extra assistant:

“The news that Chiara is pregnant is an occasion of joy for all of us. In our team the person always comes before the athlete. It is evident that for this season finale we will not be able to rely on the technical qualities Negrini, but her role as captain will be equally important. We must always try to take the opportunities that are often inherent in the difficulties: Chiara Negrini will represent an additional support to the technical staff.” Filottrano’s honorary president Giovanni Morresi

Here is what Negrini herself had to say of the news:

“Needless to say, I’m very happy. It was a project shared with my husband. We thought we could have done it later. I am happy and thank the team for wanting me to continue to make my contributions. I was very keen on it, especially because it was a difficult season and I want to help until the end. My teammates had a wonderful reaction and I thank them for the affection they showed me: I tell them that I will be one hundred percent present, ready to give advice if they want to. I am here. I am pleased to share this good news with all the fans that I have not had any problems making public, because I have always been transparent. I have faced the first maternity with serenity and I am sure that this time too will represent an edge for me. It’s just a goodbye, volleyball will still be part of my life.”

Although it is hard to contextualize both stories in relation to each other, it is impossible not to draw a comparison with how Brazilian Olympic Champion Dani Lins was reportedly treated by Vôlei Nestlé/Osasco once she announced her pregnancy.