Lauren Carlini to be Face of Adidas Volleyball 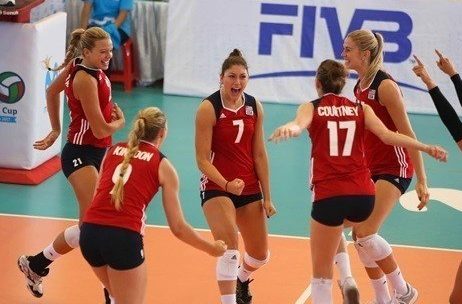 Adidas has announced a multi-year deal with USA Women’s National Team setter Lauren Carlini, to be the face of Adidas volleyball. This comes on the heels of an announcement that Adidas will be the official athletic footwear, apparel and accessory brand for USA Volleyball. Adidas, headquartered in Portland, Oregon, is known across for its athletic and lifestyle apparel, footwear and accessories.

The announcement is interesting for Carlini, USA Volleyball, and Adidas. Adidas takes over as the apparel and footwear sponsorship after an extended relationship between USA Volleyball and Mizuno. Mizuno’s contract, last renewed in December 2012, named Mizuno USA, Inc. as the official sponsor of USA Volleyball and USA Beach Volleyball through December 31, 2016. Mizuno has offered a wide variety of volleyball specific footwear and apparel for men and women over recent years. Adidas, on the other hand, currently offers limited volleyball footwear and apparel for men and women. In fact, the only men’s volleyball items currently offered on the Adidas website are four different pairs of knee pads.

Lauren Carlini is an interesting choice for Adidas as well. Carlini had a noteworthy career at the University of Wisconsin, exhausting her eligibility this past season. At Wisconsin, she was a four-time AVCA All-American, two time Big Ten Setter of the Year, 2014 Big Ten Player of the Year, and was recently named winner of the 2017 AAU Sullivan Award. Carlini, however, is still relatively new to the national team stage. She was a member of the bronze medal winning U.S. National Team at the 2016 Pan American Cup, but was not selected to the 2016 Olympic Team, and is not on the roster of the current U.S. Team competing at the 2017 FIVB World Grand Prix. Instead, the setters on that roster are Carli Lloyd and Micha Hancock. Lloyd was on the 2016 U.S. Olympic Team.

Specific terms of the agreement between Adidas, Carlini, and USA Volleyball are not currently available.

Lauren Carlini to be Face of Adidas Volleyball

That is what the article says

More from Scott Leserman
See All