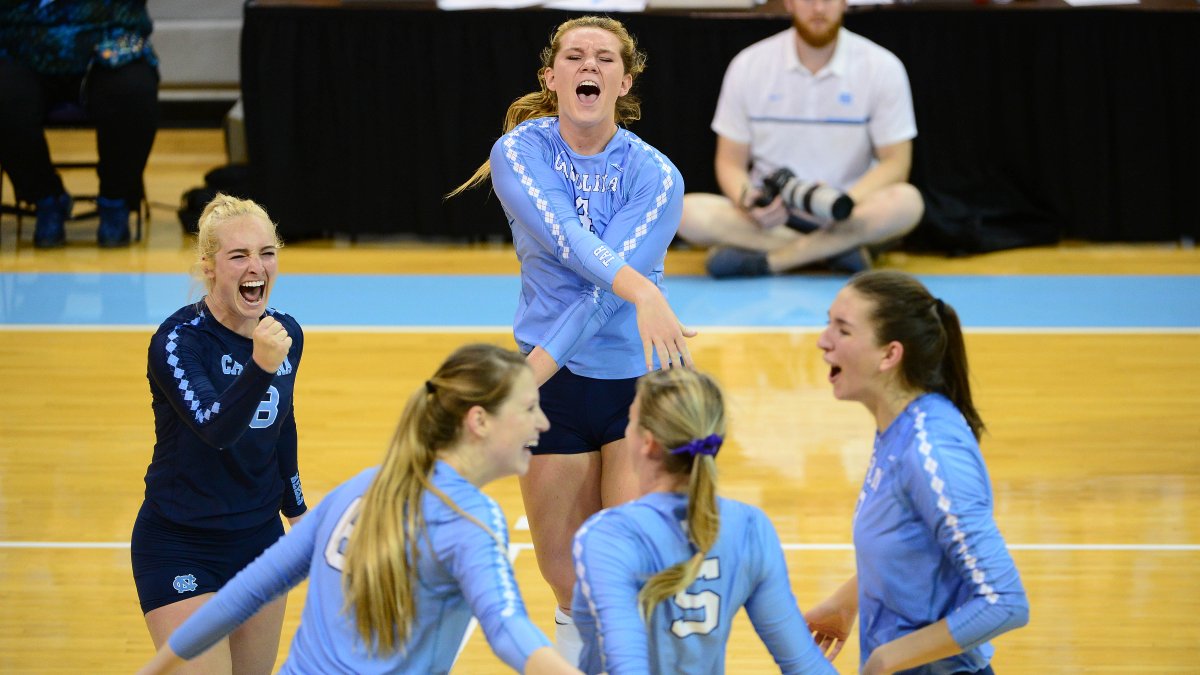 Outside hitter Taylor Leath guided UNC to a four-set win over rival N.C. State, while the Wolfpack's Katilyn Kearney set the new bar for career blocks with 501.  Archive Photo via North Carolina Athletics

CHAPEL HILL, N.C. – Redshirt junior outside hitter Taylor Leath pounded down 25 kills as North Carolina got payback for its Sept. 22 five-set loss to rival N.C. State by handing the Wolfpack its first loss of the ACC season on Wednesday.

UNC hit at a .304 clip and put down 20 more kills in the four-set victory, which snapped N.C. State’s nine-match win streak and 8-0 ACC mark.

The teams joined forced before the match, inviting fans to contribute to a Puerto Rico hurricane relief drive after both teams had visited the island for a preseason tournament.

UNC started the match on a 6-0 tear, capped by two Moseman aces. N.C. State countered with five of the next six, including two Sopitan kills, but the Tar Heels upped the margin to six at 14-8 with three Leath putaways. The Wolfpack pulled within two with a 6-2 run, featuring two Brown kills and a kill and a block by Sopitan. The teams split the next eight points, before North Carolina closed out the set on a 5-2 run. A Jacobs ace clinched the 25-20 win.

N.C. State cruised to an early 5-1 advantage in Set 2, including two UNC miscues. The Tar Heels caught up at a 9-all with help from two blocks and two kills apeice by Leath and Borup. Four ties followed, last at 13, before the Wolfpack pulled away with six of the next eight. Three Bailey putaways and a block and an ace by Pickrell gave the visitors a 19-15 lead, but the stanza was soon tied at 20. N.C. State closed the door at 25-22 with five of the final seven points, the last on a Bailey putaway.

The Tar Heels dominated Set 3, jumping ahead 14-6 early and continuing on to a 23-11 lead. Six players turned in kills in the early stretch, while Fricano notched two kills and an ace and Leath recorded the final two kills as UNC went up 12. N.C. State woke up with three straight points, including two aces, but a Nordhorn kill and Wolfpack miscue ended the 25-14 win.

Leath downed five kills as North Carolina pushed out to an 8-3 lead in Set 4. N.C. State turned the tables with a 12-2 run and kept going to build a five point lead at 15-10. Three kills and a block by Brown and a kill and two stuffs by Kearney put the Wolfpack up five. UNC answered the call with a 14-3 run of its, earning a set-point try at 24-18. Leath and Nordhorn notched three kills apiece, while Nordhorn also put up two blocks in the rally. N.C. State did not go down without a fight, thwarting four match-point tries with kills by Brown and Sopitan and an ace by Emily Harris. A Sydnye Field kill , just her second of the match, wrapped up the night.

Unbeaten no more! @TaylorMadeE and the Tar Heels hand the Wolfpack their first conference L of the year pic.twitter.com/OpMVQt0fok

North Carolina finished out a perfect 5-0 homestand on Wednesday night, handing NC State its first ACC loss of the season with a 3-1 (25-20, 22-25, 25-14, 25-22) victory. Junior Taylor Leath propelled the Tar Heels to victory, hitting .442 with 25 kills to help Carolina register its third consecutive match hitting above .300.

“I’ll just say this is a really great match by this team,” said head coach Joe Sagula. “To beat a team that was undefeated (in the ACC), to hold State to .148 hitting—that’s the lowest they’ve hit all year. They were playing really good volleyball. They’re on a roll. We played a great first set. That was very rewarding, to see us get off to a good start.”

Leath posted her sixth career 20-kill match on Wednesday night, tallying more than twice the kills of any other player on the court.

“She started the first set with two kills and one error and then she just picked it up,” said Sagula. “We’ve been working on different shots. I’m just really happy how she’s been so open to learning and doing new things in the last two matches. Different angles, hitting sharp cross-court, more line than we’ve hit before. And if she’s doing it, then it makes her a good role model for everybody else.”

Taylor Borup and Taylor Fricano followed with eight kills, while Holly Carlton had seven and Beth Nordhorn chipped in six.

Jacobs led the Tar Heels with 19 digs from the back row, while Greer Moseman tallied 11 and Carlton recorded a double-double with 10.

Carolina won the serve and pass battle, landing seven aces, including two each by Moseman and Carlton.

“I thought Casey played great for us tonight,” said Sagula. “She really solidified our passing a lot. Obviously, Greer did a great job getting us started with great serving in the first set. I thought the first and the third and the end of the fourth set we served great. Holly’s serving was great, put a lot of pressure on them. We put so much pressure on them and got them out of system quite a bit. I think that was the difference.”

Katharine Esterley led UNC at the net with five of the team’s 10.0 blocks, and Nordhron added four. Leath, Fricano and Sydnye Fields each stuffed three.

North Carolina opened the match with a 6-0 run including back-to-back aces by Moseman. NC State scored four after a timeout, but a Carlton ace and two Leath kills made it 10-5. State once again pulled back within two, 16-14, on a pair of kills, but that was as close as the Wolfpack would get, as Jacobs finished off the opener, 25-20, with an ace.

NC State raced out to a 5-1 lead to open the second set. Carolina cut the deficit to one, 5-4, then tied the score at nine on a Carlton-Esterley block. Both teams traded points until a 3-0 run put State back on top 18-15. The Tar Heels did not back down, re-tying the score at 20, but three straight by State made it 23-20, and a kill by Bree Bailey, her sixth of the set, evened the match with a 25-22 decision in the second.

The Wolfpack won the first two points of the third set, but Carolina replied with a six-point run served out by Jacobs to take a quick 6-2 lead. The Tar Heels continued to cruise, and back-to-back kills by Fricano made it 16-7. A kill by Nordhorn made it set point, and an attack out of bounds ended the frame, 25-14. UNC outhit NC State .412 to .000 in the stanza, limiting the Wolfpack to just six kills.

Carolina opened up an 8-3 lead to start the fourth, but NC State fought back to win seven straight and take a 10-8 lead. The Wolfpack stretched the advantage to 15-10, but Carolina clawed its way back with a 12-2 run to take a 22-17 lead. A block by Esterley and Fields made it match point, but NC State did not back down. The Wolfpack wiped off four straight attempts to cut the lead to two, but Fields had the final say, finding a hole for a kill to win the fourth set, 25-22, and take the match in four sets.

After two-and-a-half weeks at home, the Tar Heels hit the road this weekend for three tough road matches. The trip begins on Friday, Oct. 20, with a visit to Pittsburgh (15-4, 8-0 ACC). After Carolina’s victory tonight, the Panthers are now the lone team in the ACC to remain undefeated in conference play. Friday’s match begins at 7 p.m. and will be streamed on ACC Network Extra.

NC State’s Kaitlyn Kearney broke the program record for career blocks in Wednesday night’s match at UNC-Chapel Hill, but the Wolfpack came up short in the contest as the Tar Heels earned the season split with a 3-1 (20-25, 25-22, 14-25, 22-25) win inside Carmichael Arena.

Kearney entered the matchup with 496 career blocks, needing just two to break Pam Vehling’s record (497), and tallied five blocks in the contest to become NC State’s all-time leader in blocks with 501. The Frisco, Texas, native owns the fifth-most blocks among NCAA Division I players and has charted the most by a student-athlete in the ACC.

The Wolfpack drops its first Atlantic Coast Conference (ACC) match this season and moves to 13-7 overall and 8-1 in league play, while the Tar Heels improve to 10-7 and 7-2 in conference action.

Quoting Hampton-Keith
Overall thoughts…
“We’re disappointed,” said head coach Linda Hampton-Keith. “It was an interesting match from the standpoint that the match was won and lost at the service line with serve-receive. We talk about winning the serve-receive battle all the time and I think that’s where this match was won.

Kearney On Breaking the Career Blocks Record
“It feels really good,” said Kearney. “The last four years I’ve felt like I’ve been pretty strong in blocking, so I’m really excited to get the record. I appreciate all of my teammates who helped me get there with all the block assists and it’s really exciting.”

Match Rewind
– NC State had a tough start to the match, as a few Wolfpack miscues allowed UNC-CH to grab a 6-0 lead in the opening set but NCSU countered with a 5-1 run to trim the deficit to 7-5.
– The Tar Heels pulled ahead by six at 12-6, but the Wolfpack battled back to narrow the margin to 16-14 following a kill by Teni Sopitan.
– Lauryn Terry smacked a kill to cut the UNC lead to 20-18, but the Heels went on to win the frame, 25-20.
– NC State started fast in the second set, as the Pack jumped out to a 5-1 lead before the Tar Heels rallied to trim the score.
– A 5-1 run allowed the Wolfpack to take a four-point lead at 18-14 following a kill by Sopitan to force a timeout.
– After UNC evened the score at 20, NC State countered with three unanswered points to extend the advantage to 23-20 and Bree Bailey capped the frame with a kill from the outside to give the Pack a 25-22 second-set win.
– The Wolfpack struggled with its passing in the third set and was unable to run its offense efficiently, as UNC-CH earned the 25-14 victory to take a 2-1 lead in the match.
– NC State found itself in an early hole in the fourth set, but an 11-1 run gave the Pack a 14-9 lead after a service ace from Kassie Kasper.
– Strong serving from libero Emily Harris allowed the Wolfpack to find success, as she served seven consecutive points.
– After it seemed as though NC State had the momentum, UNC-Chapel Hill responded by winning eight of the next 10 rallies to force a Wolfpack timeout at 17-16.
– Unfortunately, the break in action did not impact the Tar Heels’ momentum but NCSU fought off four match-point opportunities before UNC-CH converted with the 25-22 fourth-set win.

Top Performers
– Bailey led the Wolfpack with 12 kills in the contest, while Julia Brown and Sopitan each put down 11.
– Setter Kylie Pickrell led all players with 34 assists complemented by eight digs.
– Defensively, Harris tallied a match-high 21 digs and Kasper pitched in with eight.

Up Next
NC State returns to action Sunday afternoon when the Wolfpack travels to Pittsburgh for a matchup with the Pitt Panthers. First serve is slated for 2 p.m. inside Fitzgerald Field House.