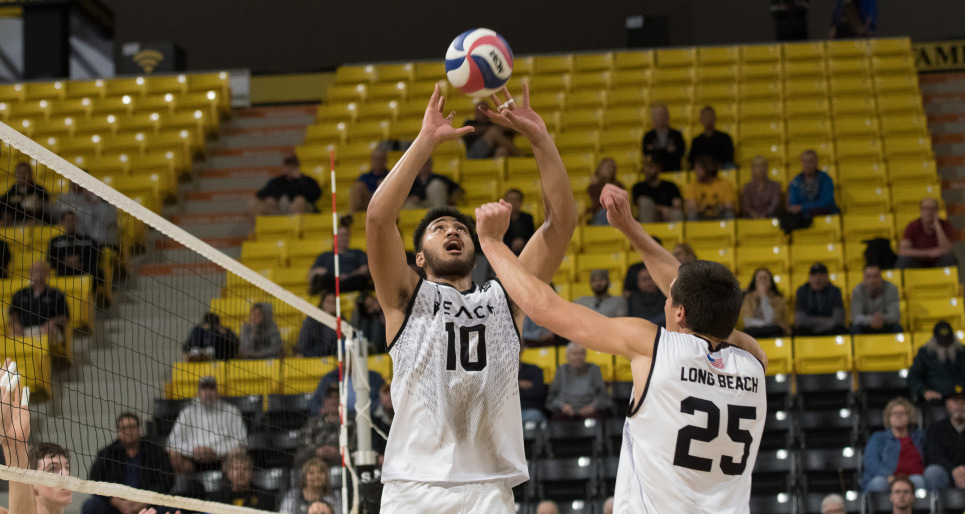 LONG BEACH, Calif. – #1 Long Beach used an efficient attack (.369), relentless serving (10 aces) and stout net defense (10.5 blocks) to dispatch #4 Hawai’i in straight-sets Saturday night (25-23, 25-14, 25-19). For all of the hype this match created due to their trading five-set wins on the islands last week, the match itself turned into a dud quickly, as LBSU took 14 less swings to notch 2 more kills. The win also marked the completion of the inaugural Big West Tournament and gave Long Beach the automatic bid to the NCAA tournament. This is also the third straight appearance in the national tournament for LBSU and the fifth under coach Alan Knipe.

LBSU was led by Big West Tournament Most Valuable Player Josh Tuaniga with 32 assists and 3 aces. Offensively, the Beach was led by Kyle Ensing and TJ DeFalco with 8 kills apiece. Ensing added 6 blocks and DeFalco had 4 blocks and a match-high 4 aces. Libero Jordan Molina joined Bjarne Huus with 5 digs each to lead the team’s floor defense. Huus added 7 kills in the attack without an error to finish hitting .583 on the night. Nick Amado‘s 7 blocks led all net defenders.

Charlie Wade, head coach for the Rainbow Warriors, was concerned with his team starting in warmups.

“I was a little concerned in warmups tonight. I have been doing this a long time and with the travel sometimes we start to see some obvious signs of fatigue and in warmups today it looked like we had heavy legs,” said Wade.

Leading the attack for UH was Rado Parapunov who lead all attackers with 10 kills. He also led the team with 2 aces. Brett Rosenmeier added 8 kills. Setter Joe Worsley finished with 28 assists. Libero Larry Tuileta finished with a match-high 6 digs.

Long Beach will most likely be the overall #1-seed, as they have been ranked #1 in the polls throughout 2018. UH will have to wait for the 1 p.m. Eastern Time announcement from the NCAA to learn of their fate.

LONG BEACH — Top-ranked Long Beach State showed its grit on Saturday night as the Beach won the inaugural Big West Championship with a convincing 3-0 [25-23, 25-14, 25-19] sweep of No. 6 Hawaii inside the Walter Pyramid to officially punch their ticket to the NCAA Tournament for the third-straight year.

The trip to the NCAA Tournament will be Long Beach State’s fifth appearance under head coach Alan Knipe and 10th overall.

With the victory, Long Beach State improved to 26-1 on the year and recorded its second undefeated season at home with a 12-0 mark inside the Pyramid.

Long Beach State was led by junior setter Josh Tuaniga as he guided the Beach to a .369 attack percentage in the match and distributed 32 assists. For his efforts, Tuaniga was named Most Valuable Player of the tournament.

Tuaniga’s solid passing led to another efficient offensive performance for the Beach. The duo of TJ DeFalco and Kyle Ensing combined for 16 kills as each had eight on the night. Senior outside hitter Bjarne Huus turned in another stout performance as he knocked down seven kills on 12 attempts without committing an error to hit .583.

Adding to Long Beach State’s offensive attack were Nick Amado (6 kills) and Simon Anderson (4 kills). The middle blockers were also solid at the net combining for 10 blocks as Amado tallied seven and Anderson added three. Ensing was also a force at the net as he posted a season-high six blocks to help lead LBSU to 10.5 total team blocks.

The Beach played well on all sides of the ball as the defense limited the Rainbow Warriors (19-8) to just .152 hitting. Huus along with junior libero Jordan Molina led the team with five digs each, while Ensing and DeFalco contributed three apiece.

Long Beach State dominated the match from start to finish as the Beach never allowed Hawaii to hit higher than .222 in a single frame.

The first set was the closest as the `Bows managed to tie the match five times before the Beach emerged victorious. Hawaii stayed within striking distance, but Long Beach State came away with the 25-23 win.

In the third set, Long Beach State opened the frame on a 7-0 run and never looked back. The Beach hit .304 in the game and led by as many as 10 (16-6) before Hawaii began chipping away. The `Bows were able to cut the Beach’s lead down to four (21-17), but Long Beach State utilized a timeout, regrouped and put the match away 25-19 to complete the sweep.

The 3-0 victory marked the 19th sweep of the season for Long Beach State, tying the second most three-set wins in a single season.

The Beach finished the match with 10 service aces, led by DeFalco’s four, marking the second-straight match in which LBSU dominated from the service line with double-figure aces.

Long Beach State will find out its opponent in the NCAA Tournament this Sunday, April 22 at 10 a.m. Fans are encouraged to join the team for the Selection Show Watch Party at Legends.

The second-seeded Rainbow Warriors (19-8) will now await word on whether they will earn an at-large bid into the NCAA Tournament. The Beach (26-1), which avenged their only loss of the season to UH last week, earned the Big West’s automatic bid and likely the top seed in the seven-team championship.

UH, which has never won a conference tournament title, hit for a season-low .152 for the match. The Warriors were led by opposite Rado Parapunov, who finished with 10 kills and was the only player in the match to reach double figures. Outside hitter Brett Rosenmeier had eight kills while Stijn van Tilburgadded six kills.

The Beach was led by TJ DeFalco and Kyle Ensing, who each tallied eight kills. DeFalco also added four aces and four blocks while Ensing had two aces and six blocks.

LBSU hit .369 for the match with 10 aces and 10.5 blocks. Setter Josh Tuaniga was named the tournament’s Most Valuable Player.

Back-to-back hitting errors by UH middle blocker Dalton Solbrig put LBSU up 14-11 in Set 1 but the Warriors answered right back with three straight capped by a Rosenmeier ace. The Beach ran their lead to 21-16 with a 4-0 run. UH fought off two set points and had a chance to pull even but Parapunov was blocked by Ensing and Nick Amado to give LBSU the 25-23 victory.

The Beach reeled off five straight points for a 10-4 lead early in Set 2. The lead was eight after back-to-back aces by Tuaniga and the Beach went ahead 19-8 after consecutive DeFalco aces. LBSU finished with five aces and hit .688 in the set in taking a 2-0 lead in the match.

LBSU scored the first seven points of Set 3 behind three UH hitting errors and an ace by Tuaniga. It would not get any better for the Warriors as they fell behind by as many as 10 at 15-5. UH slowly chipped away, closing to within 18-13 and 21-17 before the Beach pulled away to take the championship.