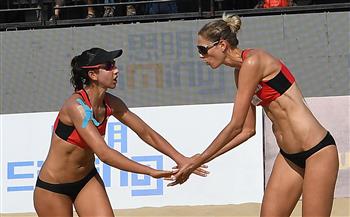 Pavan/Humana-Paredes, which finished fifth in their first FIVB effort of the season at Fort Lauderdale in March, earn their first FIVB podium finish since taking silver at the Olsztyn Four Star in July and for its first FIVB gold since winning the Porec Five-Star title in July.

The Canadians advanced to the final with a semifinal win over Brazil’s Agatha Bednarczuk/Duda Santos Lisboa in straight sets.

Claes/Hochevar were playing in their first ever tournament as a duo after splitting with partners Sara Hughes and Emily Day respectively.

The Aussies, who were coming off a runner-up finish at the Gold Coast Commonwealth Games, April 12, bounced back to pick up the bronze medal, besting Agatha/Duda in straight sets. The podium finish follows gold medals for the duo at the Qinzhou Three-Star in October and Sydney Two-Star in November.

“This bronze is just the beginning, that’s what it feels like, it’s awesome what we have got out of the team in such a short period of time and this year we want to develop and grow our game and to get some success along the way is awesome,” Clancy said.

Agatha/Duda, who were the runner-up at the 2017 World Tour Finals, are still  looking for their first FIVB title since winning the Rio Four-Star on May 21. The also earned three bronze medals in 2017, at the Olsztyn Four Star and Hague and Moscow three-star events.

On the men’s side, No. 8 Oleg Stoyanovskiy/Igor Velichko came out on top in an all-Russian final, besting  No. 7 Viacheslav Krasilnikov/Nikita Liamin in straight sets.

It was the second straight gold medal match for Stoyanovskiy/Velichko, who were the runner-up at the Doha Four Star in March, but this time the pair had what it took to stand atop the podium, despite playing in just its third FIVB tournament together.

“I’m so excited I can’t speak normally, it’s really wonderful, it’s my first gold medal for the World Tour, the previous four medals I got where not as high as this, so I’m very happy also,”  Stoyanovskiy said. “It’s a very important medal for us because it’s only our third tournament and I can’t believe that we could win a gold medal.”

Krasilnikov/Liamin had to settled for silver in their first championship berth since winning the Hague Three Star in June 2017. The duo also won the Kish Island Three-Star last February and finished third at the World Championships in August.

“Since the end of last year, we decided to push ourselves each tournament and especially it doesn’t matter the result, you know Bruno & Alison also have to be successful have to be successful in every tournament and also the Brazilian people respect that,” Bruno said. “But, today, it’s so good when you finish pushing yourselves as much as possible and like we did today on the last day of this event and I hope we continue like that. That’s going to show how competitive we’re going to be this year.”

Alison/Bruno were looking to get back on the podium for the first time in their last five FIVB outings. The duo won bronze at the Porec Five Star in July, but had finished ninth in their last four tournaments, including the Fort Lauderdale Five Star.

Kantor/Losiak last finished on the podium in January, earning silver at the Hague Four Star. The team was fifth at the Fort Lauderdale Five Star and Doha Four Star in March.