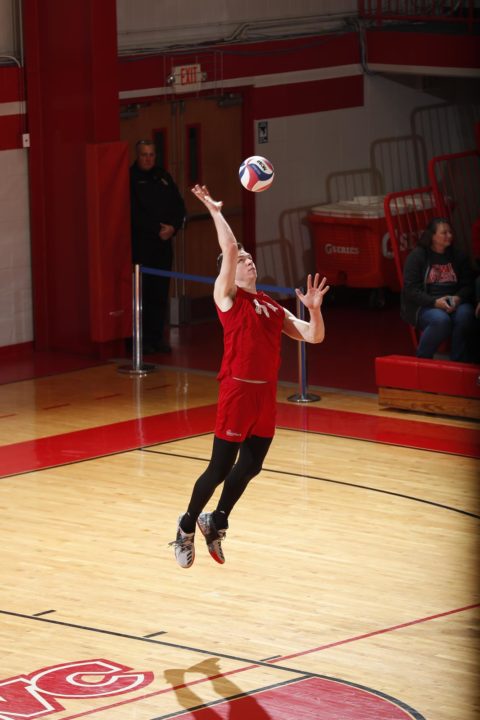 In a gruesome play at the net, Lewis middle blocker Danny Maurer suffered a broken leg after coming down on another player's foot in Set 3 of the match.  Current Photo via Lewis Athletics

In a gruesome play at the net, Lewis men’s volleyball player Danny Maurer suffered a broken leg after coming down on another player’s foot in Set 3 of the match.

Maurer had just two hitting attempts and one service attempt for the Flyers in the match which Ohio State via sweep (25-18, 25-18, 25-19). It was just the eighth appearance of the year for the 6-8 junior middle blocker from Ovideo ,Florida.

For the season, the Flyers are 16-10, including a 7-5 mark in MIVA play. The Flyers dropped both matches of a weekend road trip, falling to McKendree in four sets on Thursday and OSU on Saturday. Next up for the team are road matches at Quincy (Thursday) and Lindenwood (Saturday) to wrap up the regular season.

Lewis is currently ranked 10th nationally and fourth in the MIVA behind Ohio State (10-2), Loyola (10-2) and Ball State (8-4). The team’s final regular season foes, Quincy and Lindenwood, are the bottom two teams on the league ledger at seventh (2-10) and eighth (0-12) respectively.

Prayers for Danny Maurer of Lewis Men’s Volleyball. He was injured in Saturday’s match vs. the Buckeyes. Hang in there Dan! pic.twitter.com/wO1QAlx88n

From all of us here at Block O and Ohio State, we send our thoughts to Danny Maurer, his family, and @LewisMVBall. You never want to see anyone injured, and we hope for a speedy recovery!

Danny is doing well, surgery went good. Thanks for all the support and prayers. #FLYERNATION