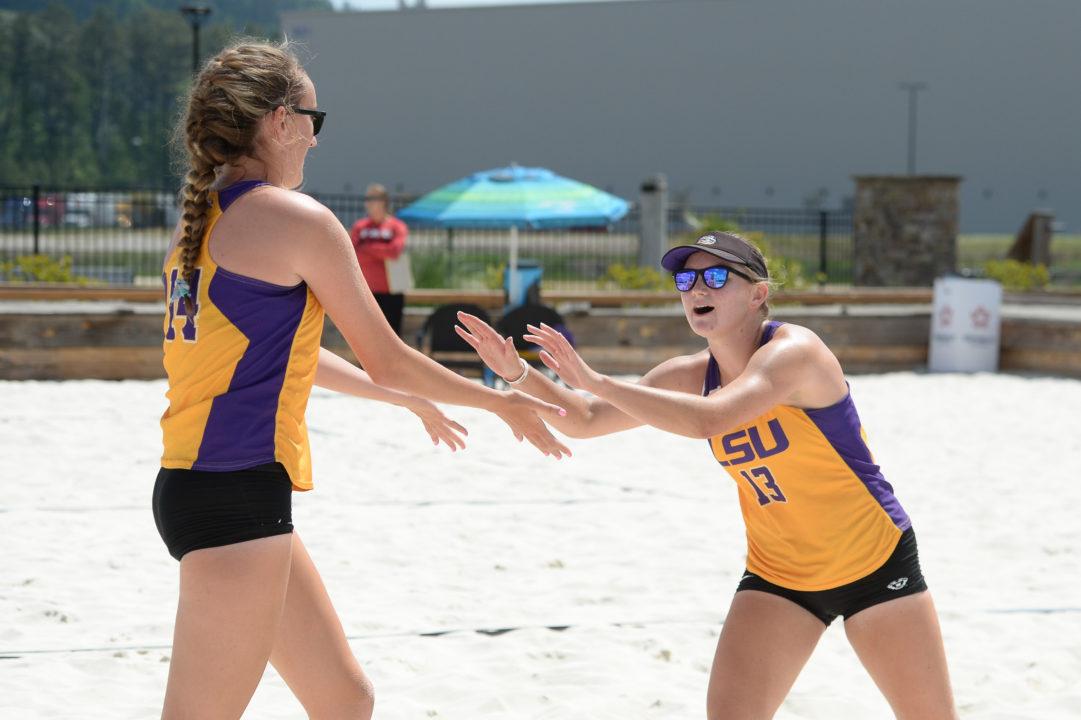 LSU Beach will move to a new state-of-the-art beach facility in September 2018 after playing at Mango's, a private 13 court facility in Baton Rouge over the past five seasons.  Current Photo via Todd Drexler, CCSA Photos

“We can’t wait to be in the new stadium and to add another fun, successful and entertaining sporting experience to the LSU Campus,” said Coach Brock. “We are so grateful for the vision and assistance by Joe Alleva and the athletic department and the generous help for the Tiger Athletic Foundation to make this a reality!”

The new outdoor sand court stadium will include six courts each filled with a 24-inch deep sand mix profile. The courts will be used for team practice as well as competition.

“A tremendous amount of research has been performed to develop and construct six exterior sand competition courts,” said Emmett David, LSU Associate Athletic Director of Facility and Project Development. “This facility will provide a great atmosphere for our student-athletes, opponents, competition play and fans.”

Beach Volleyball is in its fifth year as a program at LSU. The team earned its first birth to the NCAA championships in 2017, a season that included a 23-match win streak. LSU Beach Volleyball finished 6th in the national standings and head coach Russell Brock was named the CCSA Coach of the Year.

“We’ve been working with the LSU Athletic Administration for the last couple of years to develop a plan for the best beach volleyball stadium in the country,” said Coach Brock. “This facility will be just that.”

The team has played and practiced at Mango’s Beach Volleyball in Baton Rouge and will continue to do so through this season. The new facility, currently under construction, is located just north of the LSU Gymnastics training facility.

“Our Mango’s home has created an incredible home court advantage. We will always owe gratitude for allowing us to call Mangos our home.” said Brock.

The team will hold its Purple & Gold Scrimmage February 17 at Mango’s before opening the season in Phoenix against Cal Poly February 23rd.

We are excited to announce our plans for our new state of the art beach volleyball facility! #BreakingGround ??