LSU Beach Gears Up For 2018 Season 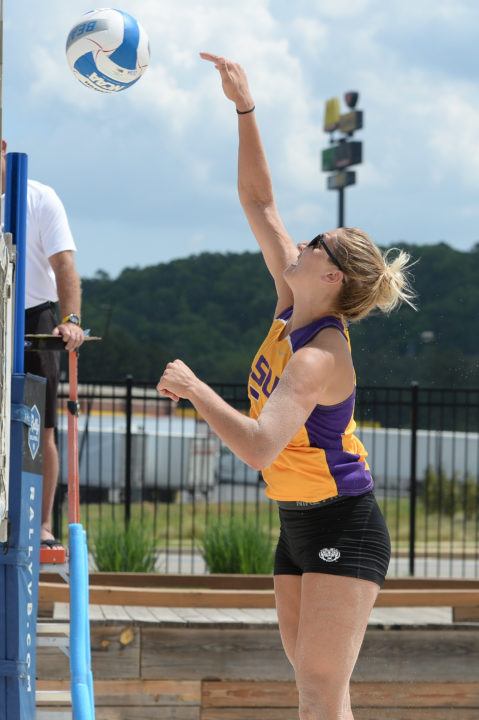 The 2017 season was historic for the LSU Beach Volleyball team. It asserted itself as a team to be reckoned with, setting a standard for the teams to come. Current Photo via Todd Drexler, CCSA Photos

The 2017 season was historic for the LSU Beach Volleyball team. It asserted itself as a team to be reckoned with, setting a standard for the teams to come.

When the team beat Tulane 5-0 at the Tiger Beach Challenge on March 18th, it set into action what would be a historic season. The Tigers proceeded to sweep through that weekend which included a win over the 10th ranked South Carolina Gamecocks.

The team went on to sweep their next four tournaments, but fell just short of sweeping their way through the Coastal Collegiate Sports Association tournament, falling to Florida International in the championship match and ending a 23-match win streak.

LSU opened their streak against Tulane and put together 11-straight matches in which they swept the competition. The Tigers beat eight ranked teams during the streak including six against top-10 competition. Overall, throughout the course of the season, LSU had 10 wins over ranked competition and eight against top-10 teams.

After having a runner-up finish at the CCSA Tournament, LSU got invited to the NCAA Championships in Gulf Shores, Alabama where they went 1-2. The win was against Long Beach State, who was ranked sixth at the time.

In 2017, LSU peaked at being ranked number seven and never fell below number 10. Head Coach Russell Brock was named volleyballmag.com’s Coach of the Year. Claire Coppola and Kristen Nuss both were both named to the second team All-America squad by VBM.

This season, the Tigers have 12 players returning and nine newcomers, who include two graduate transfers, five freshman and Gina Tillis, who had a stellar four-year career for the indoor volleyball team at LSU.

Riley Young returns to the team after having a successful junior campaign. She opened the season winning 11 of her first 13 matches and went on defeat seven ranked teams to finish out the year. Mandi Orellana is back this season after missing last season due to an injury. In 2016, she had a successful campaign going 20-7. Cheyenne Wood and Gina Tillis just finished their careers on the indoor team. Wood went 26-5 on the sand two season ago while Tillis will be making her beach debut this spring.

“It’s clear that this group has been in our program and our system for four years,” said Brock. “They have already impacted our program more than we can ever measure, and I know they are going to finish strong!”

Lilly Kessler returns to the team after having a successful 2017 season competing in the number two spot. Ashley Allmer competed primarily in the number two spot last season for the Tigers. Megan Davenport filled in at the number five spot and excelled, amassing an 11-match win streak and seven wins over top-ten competition throughout the season. Jeni Clark competed primarily in the extra spot last season for LSU where she compiled an 8-1 record.

“There isn’t a harder working group than this class,” said Brock. “They are hungry for training and are relentless in their studies. Every day this group pushes with positive energy and makes us better. They are an incredible joy to coach.”

Five sophomores return this season after making an impact last season. Claire Coppola and Kristen Nuss partnered with each other last season and competed in the one position. They tallied an overall record of 27-7 as a duo and were both named to the second team Volleyballmag.com All-America team. Olivia Powers competed primarily in the number three spot last season and compiled an overall, 26-7 record. Maddie Ligon competed in positions two through five during her freshman campaign, although she played a majority of her matches at the number four spot. She finished with an overall record of 24-9. Taylor Bradley competed in five matches as a freshman. She went 2-3 in the number four spot and was perfect at 10-0 on the extended court.

“Last year this group was amazing. It’s hard not to expect huge things with another year under their belt and they have not disappointed,” Brock said. “They used last year’s success to motivate themselves and have worked much harder than they ever did before. They are growing into the leaders that we hoped they would be. We expect even more of an impact this year as they continue to improve their games and develop as elite student athletes.”

Emmy Allen is back for her second graduate season at LSU. In her first, she competed primarily in the number two spot where she beat multiple top-10 teams. Haleigh Nelson is joining the Tigers this spring after having a decorated indoor career at the University of Wisconsin in Madison, which included two AVCA All-America honors. Emily Hardest is joining the squad after wrapping up a successful indoor career at Texas A&M. While she was an Aggie, Hardesty helped her team to an SEC Championship in 2015.

“This group has been more inspiring and motivating than we could have ever hoped,” said Brock. “They are hard workers who take nothing for granted and have an absolute hunger for success. It is pure joy to have the chance to work with these athletes on a daily basis.”

This year, LSU will feature five freshmen who are all accomplished volleyball players. Kahlee York was a three-year letter winner at Lakewood Ranch High School in Bradenton, Florida and helped lead her team to the state final four in 2014. Hunter Domanski competed in three sports in high school. As a junior at New Braunfels High School in Texas, she led her district in both aces and digs. Tatum Ballard comes to the program with a lot of beach volleyball experience having played in over 30 beach tournaments from 2013-2017. She played indoor at Archibishop Hannan High School in Mandeville, Louisiana where she earned all-state honors her sophomore season. Nicole Decker played indoor volleyball for LSU in the fall and Savannah Wininger was named team captain at St. Michael High School in Baton Rouge her junior and senior seasons.

“From the first day of training they were pushing our upper classmen in our strength and conditioning,” said coach Brock. “They have all made huge strides in the sand as well and we are looking forward to their continued contributions.”

The team will hold its Purple & Gold Scrimmage February 17 at Mango’s Outdoor Volleyball before opening the season in Phoenix against Cal Poly February 23rd.