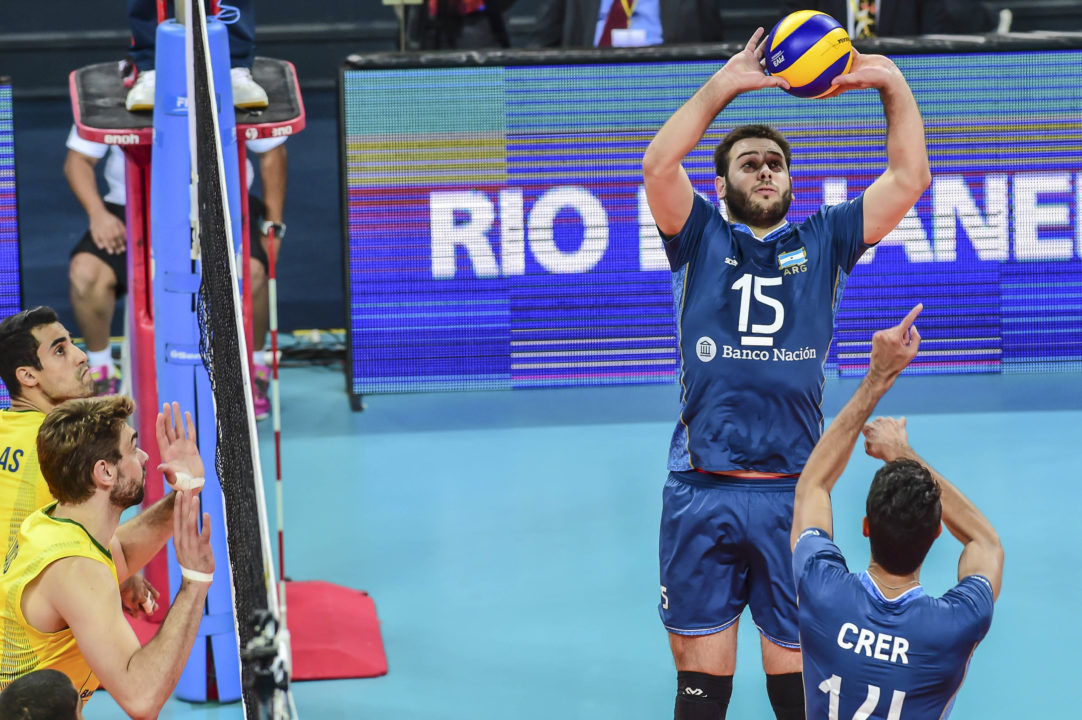 Luciano De Cecco (#15) injured his ankle in the team's last game, but is expected to be healthy enough to play in the team's big #1 vs. #2 showdown on Sunday. Archive Photo via FIVB

Sir Safety Perugia setter Luciano De Cecco has returned to training according to Italy’s Gazzetta, and is expected to play in the team’s upcoming road showdown with Civitanova on Sunday.

De Cecco left last week’s game against Vibo Valentia in the 3rd set with an ankle injury. The team would go on to dominate that match 3-0 (as it has in 7 of its 8 matches this season, resulting in a perfect 24 points). That didn’t help quell the fears of Perugia’s fans: this week, they’ll face the 2nd place team in the league, Civitanova, in a #1 vs. #2 matchup.

Civitanova has lost just 1 game this season, when they were swept by Top Volley Latina 3-0 in a bit of an anomaly game. Now, the two sides will face off at full-strength on Sunday in a nationally-televised match.

With the Argentine De Cecco at setter, Perugia last season were the vice-champions of Europe, but finished just 3rd in their home Italian league.

In spite of having played just 25 sets this season, De Cecco ranks 6th among setters with 20 points. The club has killed a league-best 55.2% of their shots this season on De Cecco’s setting with the likes of Ivan Zaytsev, Aaron Russell, Aleksandar Atanaseijevic and Marko Podrascanin at the team’s offensive disposal.

American James Shaw, who served as an alternate for the U.S. men’s National Team last summer, came in as De Cecco’s replacement at setter. Shaw is unique in volleyball as one of the tallest international-level setters in the game at 6’8″. While Perugia was able to sweep the final score, the team hit just 50% of their shots in the 3rd set without De Cecco, which was their lowest of the match (77% and 57% in the first two sets, respectively).