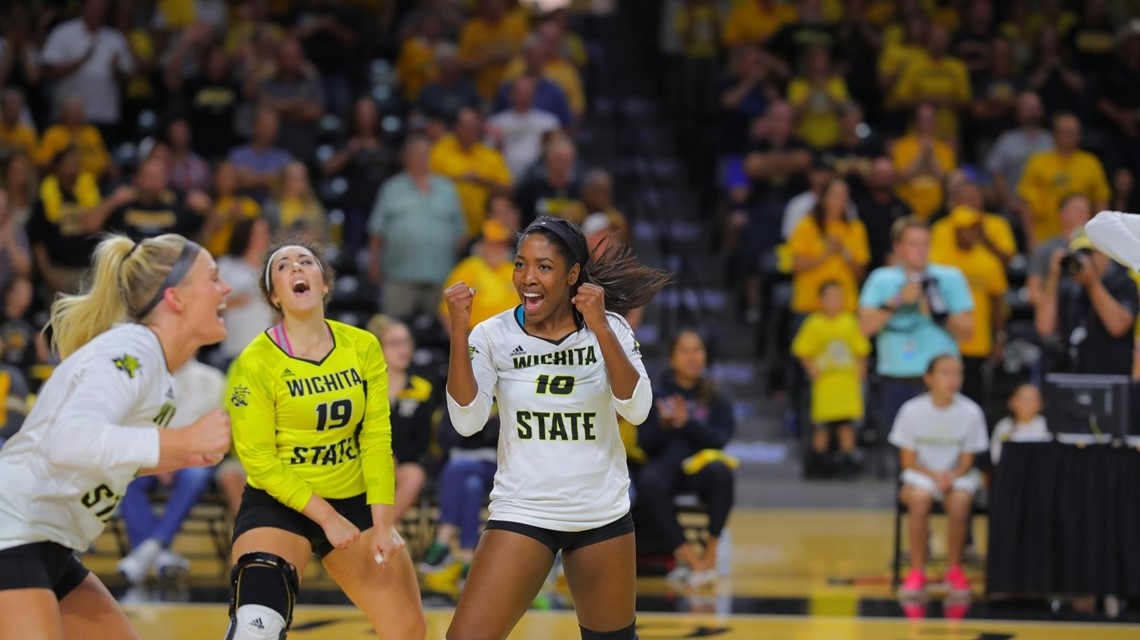 (RV) Wichita State, ranked No. 9 in the latest RPI, swept the Memphis Tigers to finish the regular season with an undefeated conference record. Archive Photo via Wichita State Athletics

(RV) Wichita State defeated the Memphis Tigers in straight sets to record their 22nd consecutive win and run the table in American Athletic Conference matches with a 20-0 record.

Currently ranked ninth in the latest RPI, the Shockers are in the mix for one of the 16 seeds in the 2017 NCAA Tournament field, which will be revealed Sunday, Nov. 26 at 8 PM CT on ESPNU. The Shockers’ only losses this season came in non-conference play to Iowa State (RPI#15), Cal Poly (RPI #19) and Oregon (RPI #23).

Against Memphis, the Shockers were led offensively by senior middle Abbie Lehman, who hit at a .733 clip, notching 11 kills on 14 swings without an error. Senior setter Emily Hiebert dished out 37 assists for the home team, and freshman libero Giorgia Civita added 18 digs

Abbie Lehman led the Shockers with 11 kills and four blocks, while hitting .733. Emily Hiebert had 37 assists, while Giorgia Civita had 18 digs.

SET 1:
• The Shockers pulled away for a 25-17 win
• The set went back and forth until Civita served the Shockers to a 14-9 lead
• A Brown kill pushed the lead to 21-14 and kills from Koon and Raudsepp gave WSU the 25-17 win
• Raudsepp led the Shockers with four kills in the set, while Hiebert had 13 assists and Civita had six digs

SET 2:
• WSU ran away with the second set for a 25-14 win
• Two-straight Raudsepp kills gave WSU an 11-7 lead
• A block by Lehman and Jackson increased the lead to 20-10
• A Tiger hitting error gave the Shockers a 25-14 win
• Lehman had four kills in the set, while Hiebert had 11 assists and Mostrom had seven digs

NEXT MATCH:
• The Shockers will next be in action in the first round of the NCAA Tournament. WSU will find out who and where they play during the NCAA Selection Show on Sun., Nov. 26 at 8 p.m. on ESPNU