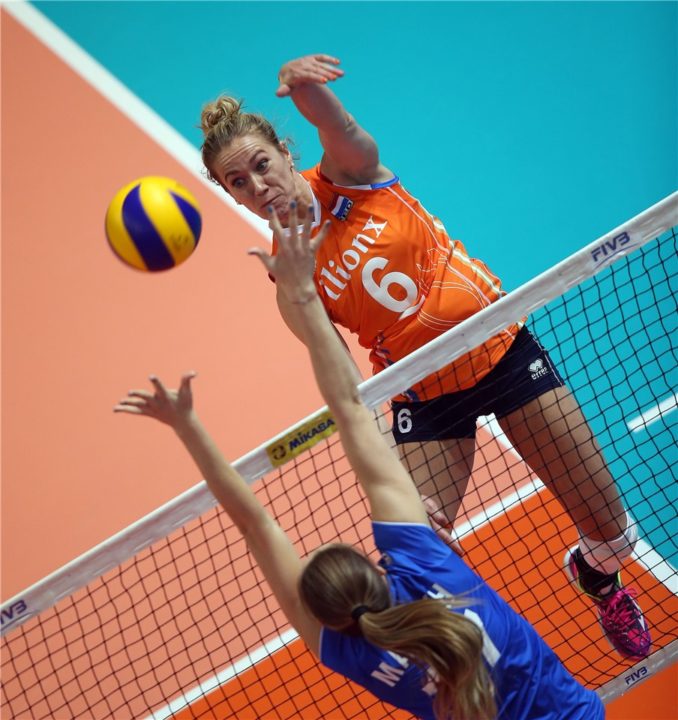 Maret Balkestein-Grothues has signed with Romanian club CSM București for the 2018-2019 season.  Current Photo via FIVB

Maret Balkestein-Grothues will be playing for CSM București in Romania for the 2018-2019 season. The 5′ 11″ pin hitter has been playing professionally since 1996 when she played for the Dutch club Krekkers. Since then she has played all across Europe for clubs in Poland, Turkey, France, Italy and her home country, the Netherlands. She won the Turkish Volleyball Cup and Turkish Volleyball League championship in 2017 with Fenerbahce. Recently she left Chemik Police due to contract issues with the club management.

This week we will play in Apeldoorn @omnisportapeldoorn #VNL Good to play for our orange fans! #letsgoorange🍊🦁🇳🇱

Balkestein-Grothues has also had a successful career with the Dutch National Team winning multiple world medals. Despite suffering an injury in the 2016 Olympics, she was able to return to the team for the knockout rounds including battling with the USA for the 2016 Olympic bronze medal. With the Dutch National Team she won the 2009 World Grand Prix bronze medal. Additionally she helped Holland to win silver medals at the 2009, 2015 and 2017 European Championships. While playing for the Netherlands at the 2010 World Championship she was named the Best Server. Currently she’s playing with the Dutch National Team in the Volleyball Nations League and is the third best scorer with 115 points including 97 kills, 13 blocks, and 5 service aces.