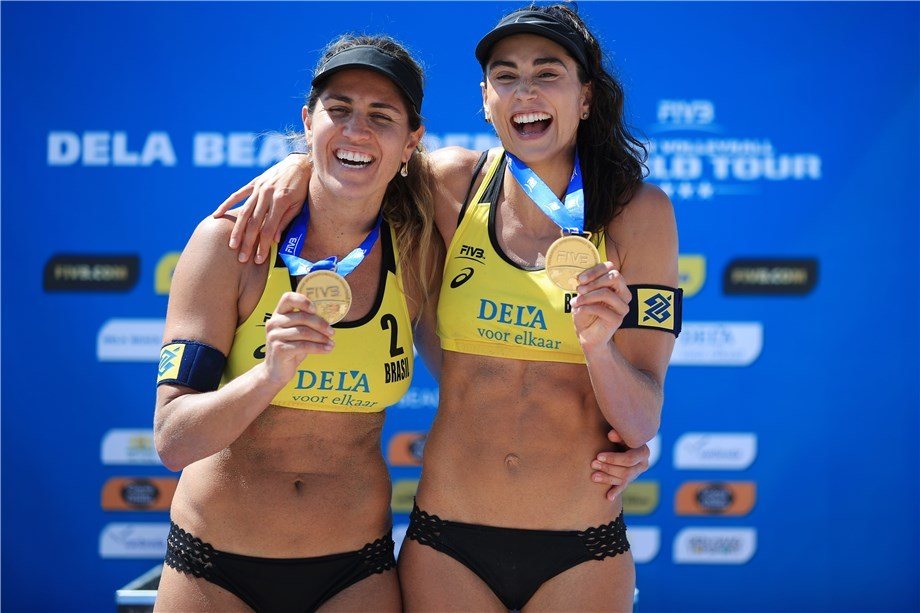 By winning the bronze medal of the Aracaju stage of Brazil’s national beach circuit, Maria Elisa and Carolina Solberg guaranteed the season’s domestic title. The duo presented regular play in all stages of the circuit, finishing at the podium in all six events they participated in (2 gold, 2 silvers, and 2 bronzes). This is Maria Elisa’s second national circuit tile, while Carol is a first time champion.

Here is how Maria and coach Luciano Kioday reacted to the title (Melhordovolei.com.br):

“We work without sponsorship, without money, wanting to make this partnership pan out, evolve. We have a very good chemistry with Luciano Kioday, our coach, we are a team which trusts each other. We are a team that was formed by chance, but that on the first day of training discovered great chemistry. I’m just so happy to have won this with Carol, I like playing with her. We left the country quota, formed a team that was not among the top three in the country, so being a Brazilian champion today is wonderful.” – Maria

“When we got together, the only certainty was that we would have to grit and grind our way through everything. And we did. Everyone in the team had a lot of dedication, sacrifice, and commitment. The rest was a question mark. But things were happening, first on the World Circuit, when we won the Dutch stage in 2017. We saw that we could form a good team. It was not a goal to win the Brazilian tour, but the results at the beginning were good, and by the time we we noticed, we were in the fight. I’m happy, many people are part of this and it’s a collective victory.” – Luciano

Maria Elisa and Carolina Solberg are currently ranked 13th in FIVB’s Senior World Rankings. They should soon be able to put up a fight and catch up with the Brazilian duos that are currently ahead of them: Larissa/Talita (2nd), Barbara/Fernanda (3rd), and Agatha/Duda (6th).

A post shared by CarolSolbergeMariaElisa (@carolsolbergemariaelisa) on Apr 8, 2018 at 4:01pm PDT