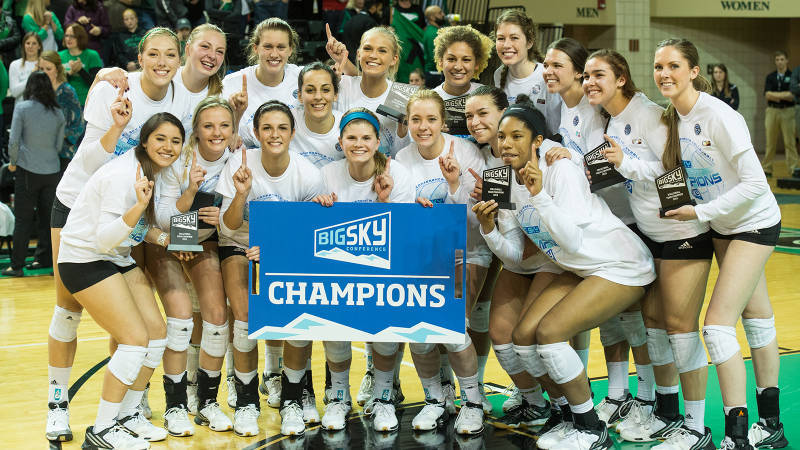 The North Dakota Fighting Hawks have never before made an NCAA Division I Tournament appearance...until now. Archive Photo via North Dakota Athletics

At one of the spectrum at the 2016 Women’s NCAA Division I Women’s Volleyball Tournament are Stanford and Penn State – the only two programs who have received an invite to every such tournament since the NCAA started recognizing women’s sports in 1971. While neither has their best team this year, they are two of the storied programs in the history of the sport. Penn State’s 7 NCAA titles and Stanford’s 6 are the most and second-most in NCAA history.

At the other end of the spectrum, 3 programs are making their first-ever appearance, at least in the Division I version of this tournament. North Dakota, winners of the Big Sky Conference; Boise State, champions of the Mountain West Conference; and UT – Rio Grande Valley, winners of the WAC; will all make their debuts at this year’s tournament. Because they haven’t had much national exposure yet, below we’ve taken a few paragraphs to introduce them to the nation of college volleyball.

The Fighting Hawks aren’t complete novices to post-season play, they simply haven’t advance to the NCAA Tournament since joining Division I – a transition that began in 2008. The Athletics Department briefly considered a sweeping cut to its athletic programs earlier this year, citing the need to concentrate resources in fewer sports to have more success, but ultimately decided better of the decision.

The team finished 26-9 overall this season, including 14-2 in Big Sky Conference play. They backed up their regular-season title with a perfect sweep through the conference tournament, including a .448 hitting percentage in the championship against Idaho State. Junior middle hitter Faith Dooley was named the tournament MVP. While it was the team’s offense that shone in that tournament, the Hawks’ defense was what carried them through the year. The team ranked 30th in Division 1 in blocks-per-set as a team (2.57) and 12th in digs-per-set (17.47). Alivia Fraase led the team at 4.82 digs-per-set, which ranked 51st nationally as an individual.

The team didn’t play many world-beaters in their Out of Conference schedule, but they did manage to steal a set from Minnesota at a tournament in Minneapolis on September 16th. That’s the same Minnesota team that will be their first round matchup, so in the least, there will be some comfort in the surroundings for the Hawks. Nobody else on their schedule earned an NCAA invite.

Mark Pryor got his team over the hump in just his 3rd season with the team. Coaching diggers is his specialty – he’s had a player lead the NCAA in digs-per-set, wire-to-wire, at both the Division II and Division I level. He’s the only coach in history who can make that claim.

If it’s surprising to you that the Broncos are playing in their first-ever NCAA tournament, you’re not the only one. They did so by winning the Mountain West Conference over perennial favorites Colorado State (who also earned an invite) – thanks in part to a 3-2 win over the Rams in mid-November. Boise State’s final regular-season record came to 25-6, with a 16-2 record in Mountain West play. They will play a two-loss Western Kentucky team in the Stanford sub-regional. The Hilltoppers went 14-0 in Conference USA play.

Boise State played a tough out-of-conference schedule, though they didn’t impress much in those games. Their schedule includes wins a 3-0 loss to BYU and a 3-1 loss to Missouri, both of whom are seeded hosts in this year’s tournament. The Broncos also lost to TCU and NC State out-of-conference. Boise did beat a few historically-solid WCC teams (Santa Clara, YC Davis), but really hit their stride late in the season with 13-straight wins.

The Broncos’ offense is the best part of their game – they ranked 7th nationally in kills-per-set (14.52), led by Sierra Nobley’s 4.56-per (14th in the nation, tops in the Mountain West). By correlation, their setter Jaymee-Lee Bulda ranks 4th nationally in assists-per-set with 11.77.

If the Broncos hope to advance in December, they’ll have to clean up their service game – they don’t hit a ton of aces, and they have a fairly high service receive-errors per set average of 1.1. They’ll also have to find a way to slow down WKU’s hitters Rachel Anderson and Alyssa Cavanaugh at the net – because their back-row hasn’t been great this year, and the Hilltoppers were swinging very well, and very aggressively, at the end of the regular season.

Boise State is led by head coach Shawn Garus, who leads both the indoor and outdoor programs and is in his 8th season at the school.

The “Rio Grande Vaqueros,” as they’re often referred to, are a part of the University of Texas system, and is the largest university in the U.S. with a majority Hispanic student body – 90% of their 28,584 students are of Hispanic descent.

But the team inherited the UT-Pan Am Division I status, and its place in the WAC, and have chosen to retain all of UT-Pan Am’s athletics history. Fortuitously, this ‘first time’ still holds up – as UT-Pan Am never qualified for the Division I tournament ever.

The Vaqueros will face their flagship siblings the University of Texas in the first round in Austin – with the winner facing Texas A&M or SMU. Texas, who lost the NCAA championship game last year, will be heavily favored – but have no fear Vaqueros fans, there’s a lot to be happy about here. For one, RGV will play in a bracket with 4 Texas teams. At present, they’ve done a lot of international recruiting, but they’ve also done a lot of in-state recruiting. One way or another, the Eyes of Texas will be upon them when they make their debut on Friday, and there’s a good chance that a lot of those eyes might see value in a starting position on an NCAA tournament team rather than an end-of-the-bench position on one of their more powerful in-state foes.

That’s not where it stops, either. UT-RGV has a win against an NCAA-tournament bound Big 12 team this season – a season-opening 3-1 win over the Baylor Bears in Waco. And, what’s more, they have a 2-2 all-time record against the Longhorns – winning 2-0 on October 12th and 20th, 1973, in games in Houston and Austin. The two teams played again in 1975 (a 2-0 Texas win) and in 2002 (a 3-0 Texas win), so both teams have had the other one’s number at different points in their history.

Their head coach, Todd Lowery, is a rising name in the volleyball world. He’s only 40 years old, but built one of the best programs in the NAIA at National American University when he became the head coach at just 25. The school dropped the sport in 2007, which led Lowery to UT-Brownsville, where he won 2 more NAIA National titles. Now, he’s showing that, while it’s a whole different level of competition at the Division 1 level, his basic fundamentals of building a program still work – and in year 2, he’s already put the team into the NCAA tournament.

“I’m not sure we expected to be here this fast, but we’re not complaining,” Lowery said. “At this level, it’s definitely a process and it’s a great experience to have to go out and play high-level volleyball every single night. Compared to the NAIA level, there’s a lot more match prep and film breakdown that we have to do. Teams are making constant adjustments. It’s a chess match within the game. I think we had a great chess match against New Mexico State with changes and counter-changes, moving kids and those kind of things. It’s fun to have to do those things, and we didn’t necessarily have to do those things at the NAIA level.”

“There were a lot of people that told me not to take this job. They said this program couldn’t win. I didn’t believe that,” Lowery continued. “There were some ups and downs both last year and this year when you start to doubt yourself a little bit, but it’s awesome to have support. [Assistant coaches] Vini [Baigan] and Erica [Adachi] were there every day saying we’re doing things the right way and to stick with it. My wife, a former volleyball player, also told me it was going to come. It’s so important to have that support as a head coach.”