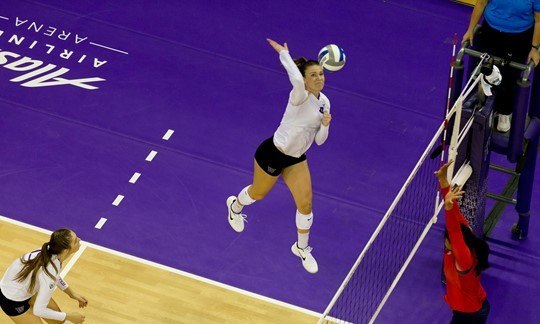 A junior, Courtney Schwan is the second Husky to win the Pac-12 Player of the Year honor in the last four years with a Husky winning the award for the third time in that span. She follows former Husky Krista Vansant who won the honor in 2013 and 2014. Leading Washington to a second-straight Pac-12 crown, Schwan was named the Pac-12 Offensive Player of the Week on Oct. 10 and Nov. 28. She ranks sixth in the Pac-12 in kills (3.76) and seventh in points per set (4.13). She has helped Washington average 14.27 kills per set, which ranks 19th in the country. Her 27 kills in the win over UCLA on Nov. 23 was a Pac-12 high for four sets. Schwan also makes her first-career appearance on the All-Pac-12 team. UW is the No. 8 seed overall in the NCAA Tournament.

Kathryn Plummer is the second-straight Cardinal to win the freshman of the year award. The Aliso Viejo, Calif., native has helped Stanford earn a No. 6 seed in the NCAA Tournament and finish tied for second in the Pac-12. She ranks second in the Conference in kills per set (3.24) while also ranking ninth with a 3.88 points per set average. Plummer is a three-time Pac-12 Freshman of the Week honoree, taking home Pac-12 Offensive Player of the Week nods on Nov. 21.

The first Wildcat to win the Pac-12 Setter of the Year honor in the six-year history of the award, senior Penina Snuka is second in the Pac-12 with a 10.71 assists per set average on the season. She has helped Arizona earn a fourth-consecutive NCAA Tournament berth while making her second-career All-Pac-12 appearance. Snuka went over the 5,000-career assist mark this season making her just the 13th player in Pac-12 history to reach the milestone. She is second among active Division I players in career assists (5,086) and is 12th all-time in league history. Snuka earns a spot on the all-conference team for the third-consecutive year.

In the short six-year history of the award, the senior was the first Bruin to win the honor last year and claims the award again in 2016. The Saratoga, Calif., native leads the Conference in digs per set (5.03) and has helped UCLA record 17.49 digs per set, which ranks 11th in the country. She earns a spot on the All-Pac-12 team for the first time in her career, she posted 36 digs in the five-set loss versus Arizona on Oct. 9, a Pac-12 single-match high this season. Her 27 digs in a win versus Oregon State on Nov. 16 are a Pac-12 high in three-set matches. Formico was voted Pac-12 Defensive Player of the Week three times this season. She helped the Bruins tie for second in the Pac-12 and earn a No. 10 seed in the NCAA Tournament.

WASHINGTON STATE head coach Jen Greeny has led the Cougars to the NCAA Tournament for the first time since 2009 and the 11th time overall. The 2016 Cougs have already recorded one of the best seasons in the program’s history, posting 21 wins, the first 20-win campaign since 2002 and the most since that year, as well. The team’s 11 Conference wins to tie for fifth are also the most in 15 years and the best finish for the team since 2003. Going into the postseason, WSU ranks third in the nation in blocks per set (3.30) and 22nd in opponent hitting percentage (0.163). Two Cougs also rank in the top 15 in the country in blocks per set with Taylor Mims ranking seventh and Claire Martin ranking 12th. Washington State was ranked as high as No. 10 in the AVCA poll, the highest rating since 2002 starting Conference play at 4-0, the team’s best start since Greeny was a player in 1997. WSU has also posted five wins over ranked opponents, including victories over Washington, Stanford and UCLA. It is the third time in the history of the Pac-12 the coach of the year honor has gone to the WSU head coach and the first time since 2009.

A 2014 CoSIDA Academic All-District honoree, Laura Larson leads Arizona and ranks seventh in the Pac-12 with 3.86 digs per set. She became the 16th player in Arizona history to surpass 1,000 career digs this season and is on pace to leave Arizona the all-time leader in sets and matches played. Her three-plus seasons at Arizona have been the best consecutive defensive seasons in Arizona history. Larson was the subject of a Pac-12 Network STEM feature in which she talked about applying her knowledge from the classroom to the volleyball court. Boasting a 3.97 grade point average, she is a cellular and molecular biology major and has twice been named to the first team Pac-12 All-Academic team.