Mims Notches 24 Kills in WSU’s Upset of No. 20 Colorado 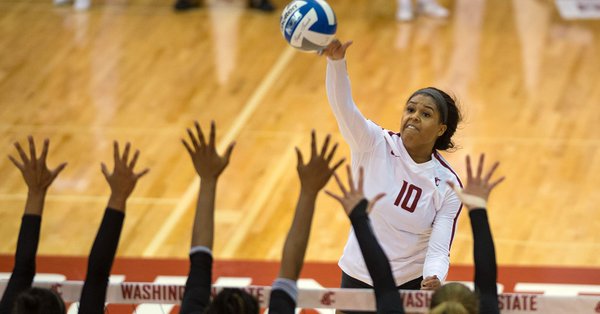 The statistics were as close as the scores, with both teams notching 60 kills and 68 digs and WSU edging the Buffs 6-2 in aces and 11-9 in blocks. Washington State commited one more hitting error and were bested .209 to .205 in hitting percentage.

Junior outside Alexa Smith did her part to lead the Buffs, notching 24 kills and 14 digs, while hitting at a .304 clip. Junior outside Frankie Shebby added 14 kills, eight digs and three blocks and senior middle Anna Pfefferle chipped in nine kills and four blocks. Junior middle Naghede Abu was tops at the net with five blocks, while sophomore outside Justine Spann led the backcourt with 18 digs. Smith (14) and junior libero Gabby Carta-Samuels (12) also notched double-digit saves.

The teams traded points for much of the first set, posting 20 ties, last at 21-all. Washington State broke away with a final 4-2 run, including two Schoenlein putaways.

The Cougars carried the momentum into Set 2, starting off with a 5-2 run, led by two Mims kills, but Colorado caught up at 8-all and went on to a 11-8 lead with two Abu blocks and two Smith putaways. Washington State turned the tables with a 12-2 run, incluidng four kills by Mims and aces by Tusa and Dirige. Down 20-13, the Buffs fought back with five of the next seven, cutting the deficit to four at 22-18 with two kills and a block by Smith. WSU responded with kills by Schoenlein, Mims and Lajos to close out the 25-19 win.

WSU built a five-point lead in Set 3 at 8-3 and held the advantage until 12-7 when Colorado mounted a comeback. The Buffs rallied with 12 of the next 15 points. Four Cougar errors and kills by four different players contributed to the rally. Washington State cut the margin from 22-17 to two at at 22-20 with kills by Urias, Lajos and Mims. A Shebby kill and WSU miscue put Colorado on the hill at 24-22. After a pair of Cougar kills, Smith salvaged the Buff victory at 25-22.

The teams split the first 20 points of Set 4, before pair of Lajos blocks helped the Cougars to a 14-10 edge. Colorado charged back with a 9-3 run including four Smith kills and two kills and a block by Shebby. Later down 20-18, Washington State scored three of the next four as Schoenlein turned in a kill and a block and the Cougars capitalized on two CU miscues to take a 21-20 lead. Shebby, Abu and Smith put Colorado in front 23-22 and Smith gave the Buffs a chance to tie the match at 24-23. The Buffs had two more set-point tries, last at 26-25.  A Urias kill and Colorado miscue gave Washington State the first of their three tries at 27-26. A pair of Shebby kills stopped the first two attempts, but Schoenlein delivered a kill and a block to clinched the upset at 30-28.

Junior outside hitter Taylor Mims led the Cougars with a career-high 24 kills and had five digs and two blocks. Senior opposite Casey Schoenlein, shifting over to take the injured Woodford’s place, had 13 kills, a pair of blocks and served the match-winning ace. Freshman Penny Tusa had three kills, 29 assists, two block and an ace and Ashley Brown added another 20 assists. Junior Ella Lajos had nine kills, hit a team-high .353 and had three blocks. Redshirt sophomore Jocelyn Urias led the match with seven blocks while adding five kills. Sophomore Alexis Dirige led the match with 23 digs and served a pair of aces.

WSU and Colorado each had 60 kills and each had 68 digs. The Buffs narrowly edged the Cougars with a .209 hitting percentage to WSU’s .205. WSU won the blocking wars 11 to 9.

WHY & HOW…
WSU Head Coach Jen Greeny said, “It was a great team effort. That’s what happens when you don’t have one of your players: everybody else has to step up and they did just that tonight so I’m very proud of the entire team. Casey Schoenlein did a fantastic job of moving over to the left side and we pieced it together from there. Everybody else really stepped up. I thought at times our passing and serving were really great. I know Colorado stepped it up in the third and fourth sets but we responded and got it done.”

On freshman Penny Tusa taking on more than setting tonight, Greeny said, “(She played) pretty great for a freshman. She used to playing (everywhere). That’s what she did all through club and through high school so this is nothing different for her. It’s at a much higher level but she’s such an athlete and she would do anything for this team: that’s just the kind of player and kid that she is. Very proud of her.”

On senior opposite Casey Schoenlein ending the match with an ace after serving for the first time in her WSU career, Greeny said, “Casey did a great job this summer with the U.S. Collegiate National Team and was one of the best servers out there. I’m sure she was confident going back there and the net gave us a little love so that helps as well.”

Junior outside hitter Taylor Mims said, “Playing without McKenna was a big hole to fill, for sure. Missing a 6-4 girl (who is) able to play outside, passing well, blocking and defense, that’s really hard. (Despite) having people thrown into new positions, I think we faced adversity and came out with the win.”

This is the second consecutive win over Colorado by WSU. The Cougars won Nov. 20, 2016, in Boulder, 3-0.
The last time WSU defeated Colorado in Pullman was Halloween night 2012, a 3-0 Cougars win.
This was the first win over a ranked team this season for WSU.
This was the first time in 252 sets in a WSU uniform that Casey Schoenlein had served and it was a match-winning ace.
Attendance: 1,203

WHAT HAPPENED: For the fourth time this season, junior Alexa Smithhammered 20 or more kills, this time recording 24, one shy of her career-high. She hit .304 on the night with seven errors on 56 attacks and tallied a double-double with 14 digs while adding a pair of blocks.

The Buffs had three players, including Smith, in double-figures for digs. Justine Spann led the team with 18 and Gabby Carta-Samuels picked up 12 digs.

SET 1: The first set was tied 19 times before Washington State recorded at two-point lead (23-21) late in the frame. Colorado took its first timeout at that point and returned to the court with a kill from Shebby. WSU took the following point and despite a great effort, CU fell 25-23 in the game.

SET 2: The Cougars recorded a 5-2 start to the second set, but the Buffs took the next two points to get within a point. WSU sided-out out, but the two teams exchanged points before the Buffs strung together a 4-0 run with four kills to take a 10-8 advantage. WSU took a timeout, but after the break, committed an attack error, increasing CU’s run to 5-0. The Cougars then responded with four straight points of their own to retake the lead. The Buffs took a timeout three points later after WSU had gone up 14-12. CU had to spend its final timeout four points later after the Cougars increased their lead to 17-13. WSU extended its lead to seven at 20-13 and despite an effort to rally, the Buffs fell 25-19.

SET 3: WSU again took the lead to start the third set, this time taking an 8-3 lead before the Buffs took a timeout. Colorado chipped away at the lead and got within a point (13-12). The Buffs then used a 3-2 run to even the set 15-15 and went up on the following point off an attack error by the Cougars. DeLuzio added a kill to bring the score to 17-15, causing WSU to take a timeout. The Buffs recorded the following two points to force the Cougars to spend another timeout. The Buffs increased their lead to five (21-16), but after a 4-1 run by WSU, CU needed to take a timeout (22-20). The Buffs regrouped and won the set 25-22.

SET 4: The set was very close and neither team had a lead larger than two points before WSU tallied three straight points to take a 13-10 advantage. The Buffs called a timeout, and used a 4-2 run out of the break to get within a point (15-14). After a WSU timeout, the Buffs came back to even the set at 16-16 and went up 20-18 before the Cougars recorded two consecutive points to draw the set even. WSU retook the lead on the next point following a timeout by the Buffs, but CU responded with a kill from Shebby (21-21). The two sides battled for the remainder of the set. The Buffs had three set points before WSU went up 27-26. CU fought off two straight points, but couldn’t hold off the Cougars as they finished the set 30-28.

NOTES: Alexa Smith recorded her ninth double-double of the season…Justine Spann spent time at the libero position for the first time in her career and recorded a career-best 18 digs…Brynna DeLuzio handed out 53 assists, marking the sixth time this season she has record 50 or more in a match…CU is 3-3 all-time in Pullman, Wash.

NEXT UP: The Buffs head to Seattle to face No. 9 Washington on Sunday, Oct. 8, at 4 p.m. The match will be televised live on Pac-12 Mountain and Pac-12 Washington.

QUOTES:
Head coach Jesse Mahoney
“Road wins in the Pac-12 are tough to come by. Teams that win on the road generally have found a way to play low-error volleyball. We didn’t do that tonight – we had too many serving errors and poor attacking decisions. I was happy with our fight in sets three and four after going down 0-2.”