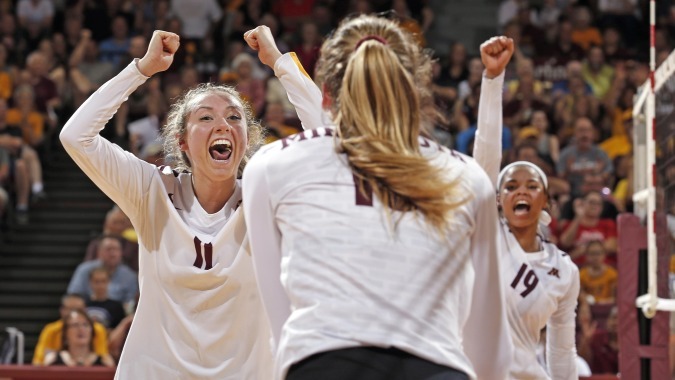 Senior middle blocker Molly Lohman put up career-high 14 blocks and sophomore outside hitter Alexis Hart downed a match and career-high 20 kills to lead the No. 3 Golden Gophers past No. 24 Michigan in both teams' Big Ten opener. Current Photo via Minnesota Athletics

MINNEAPOLIS – Senior middle blocker Molly Lohman put up career-high 14 blocks and sophomore outside hitter Alexis Hart downed a match and career-high 20 kills to lead the No. 3 Golden Gophers past No. 24 Michigan in both teams’ Big Ten opener.

Michigan jumped out to a 4-1 lead in Set 1 behind a pair of Adeja Lambert kills. Minnesota caught up, tying the set at 6-all, before vaulting ahead 9-7 on a stuff by Samantha Seliger-Swenson and Regan Pittman. The Wolverines knotted the score at 11, 12 and 13, but the Gophers maintained the edge, capitalizing on a pair of UM miscues to go up 16-13. A 6-1 run, with two kills and two block by Lohman, put Minnesota at set point at 24-17, then a service error clinched the 25-18 win.

It was the Wolverines that struck early again in Set 2, leading 7-4 as Kieffer-Wright and Skjodt chipped in three kills apiece. Michigan fought off Minnesota tied at 7 and 8, and led by three at 12-9 after two Crocker putaways. The Gophers managed six of the next eight to edge ahead 15-14 on a Sydney Kleinman kill. The lead soon stood at six at 23-17 as Minnesota got kills from four different players in the 8-3 run. A Lambert kill slowed the Gophers momentarily, but a kill and a block by Samedy wrapped up the 25-18 win.

After taking an 8-3 lead in Set 3, the Wolverines found a way to hold on. Up just three at 13-10, Keiffer-Wright turned it on with two aces and a block to push the Michigan advantage to eight at 19-11. It wasn’t over yet, however, as the Gophers sliced the gap to one with eight of the next nine points, including four kills and a block by Hart. A stuff by Samedy and Lohman knotted the score at 21, but the Wolverines persevered, as Lambert chalked up three kills in a final 4-1 run.

The Gophers made just one error in Set 4, hitting at a .565 clip en route to the win. The Wolverines hit at a -.111 clip in the final set. It was quickly out of hand as Minnesota scored the first nine points of the stanza. Hart had three kills and the team turned in a pair of blocks in the early going. Back-to-back Lohman stuffs upped the score to 12-1. Michigan never scored more than one point in a row in the set as the Gophers cruised to the 25-8 win, clinching the match on a Samedy putaway.

The No. 1 Minnesota Volleyball team opened Big Ten play with a 3-1 victory over No. 20 Michigan, tonight, at Maturi Pavilion in front of 5,028 fans. Minnesota improves to 12-0 overall, 1-0 in Big Ten action.

Alexis Hart hit .341 and tied a career-best 20 kills, while Stephanie Samedy had a double-double with 13 kills and 14 digs. Molly Lohman had 10 kills hitting .526 and recorded a career-best 14 blocks, and Regan Pittman and nine kills and hit .318. Dalianliz Rosado had a team best of 18 digs and three services aces while Samantha Seliger-Swensonproduced 51 assists, four blocks and four digs. As a team Minnesota hit .359 with a set-best .565 in the third. They also added 17 blocks, 60 kills, 63 digs, and six service aces. Michigan hit just .156, had seven blocks and 47 kills.

First Set: Minnesota utilized five blocks en route to a 25-18 win. Pittman ended a back and forth rally off a tip to give Minnesota a 10-8 lead. Lohman’s slide increased Minnesota’s score to 19-16. She and Samedy connected for back-to-back blocks to put Minnesota up 22-16. Lohman made it set point with a kill to the deep corner, while a Michigan service error closed out the set.

Set Two: Minnesota hit .361 and had 16 kills that contributed to a 25-18 set win. Minnesota capitalized on a 4-0 run after a 15-15 tie to win the set. An ace from Hart tied the game 12-12. Michigan used one of its timeout after Pittman and Sam Seliger-Swenson added a block to give Minnesota the 18-15 lead. Samedy recorded her fifth kill of the night with a line shot to put the Gophers at 22-17 which led to Michigan calling their second timeout of the set. A block from Samedy and Lohman closed out the second set and put the Gophers up, 2-0.

Set Three: Michigan battled back and went built a 19-11 lead as the Wolverines won the set, 25-22. Michigan took an early lead in third, 8-3, which lead to a Minnesota timeout. Sydney Kleinman cut the lead in half 8-4 when she tooled Michigan’s block on the outside. After a four-point run by Michigan, Samedy added a kill to make it 12-9, as the Gophers earned a side out. Michigan built up a 15-10 lead with big blocks against Minnesota. A kill from Pittman put a break in Michigan’s lead, making it 19-12 and Hart made it 20-14 with a kill. Rosado served up an ace to pull the Gopher within five.  Hart added another kill to make 20-16. The Gopher run forced Michigan to call a timeout. Hart blocked a tip from Michigan’s right side to cut the Wolverine to two, which was followed up by another block by Lohman and Seliger-Swenson to put the Gophers within one of the Wolverines. Lohman and Samedy were able to tie the game up 21-21 with another block. However, Michigan responded and finished off the set with a 24-21 lead and eventually took the set 25-22.

Set Four: Minnesota finished off the match hitting .565 and defeated the Wolverines 25-8. Minnesota started off the fourth set with a 9-1 lead with Rosado on the line who had an eight point service run. Michigan used up their two timeouts at the beginning of the set during the Gophers big run. The Wolverines fourth service error of the set put the Gophers up 19-5. Seliger-Swenson added a kill and increases the Gophers lead to 20-6 while Hart recorded her final kill of the night to make it 21-6. The set ended with an over pass kill from Samedy to win the set and match.

Senior outside hitter Carly Skjodt led the Wolverines with 13 kills, while junior libero Jenna Lergposted 18 digs in the defeat.

Michigan quickly jumped out to a 4-1 lead in the first set, but Minnesota rallied with a 3-0 run to come from behind and go ahead, 10-8. The Wolverines were then forced to play catch-up and tied the score at 12-12 and 13-13 before the Gophers inched ahead and maintained the lead for the remainder of the set. Senior Adeja Lambert led the Wolverines with four kills in the opening set, but Michigan was held to a .163 hitting percentage as Minnesota claimed a 25-18 victory.

The Wolverines jumped out to another early lead in the second set and forced Minnesota to take its first timeout of the match as a kill by sophomore Cori Crocker and a Gopher attack error gave Michigan a lead at 12-9. Minnesota then rallied to tie the score three times before going ahead 16-15 and maintaining the lead from there. The set featured nine ties and two lead changes, but it was Minnesota which used a .316 attack average to force a 25-18 second-set win.

Michigan dominated the first half of the third set, going up by as many as eight points thanks to five kills from Skjodt and three aces by senior Claire Kieffer-Wright. Despite a healthy lead and just four Wolverine errors, however, Minnesota rallied late to tie the score at 21-21. From there, two kills by Lambert and one by Kieffer-Wright gave the Wolverines the offense needed to take set three, 25-22.

Minnesota began the fourth set on a 9-0 run, which forced the Wolverines to burn both timeouts early on. A kill from senior Katherine Mahlke finally put the Wolverines on the board, but the Gophers used a .565 hitting percentage with just one attack error to close out the match, 25-8.

Along with Skjodt’s 13 kills, Crocker finished with 11 kills at a team-leading .429 percentage. Sophomore setter MacKenzi Welsh earned her third double-double of the season with 41 assists and 12 digs, while Kieffer-Wright tied her career high with three service aces.

The loss snaps Michigan’s four-match win streak, and the Wolverines are now 0-3 against opponents currently ranked in the AVCA Top 25.

The Wolverines will return to action Sunday (Sept. 24) with a match at No. 5 Wisconsin to wrap up the weekend road swing. First serve is set for 2 p.m. CDT inside UW Fieldhouse, and fans can watch the contest live on ESPN.