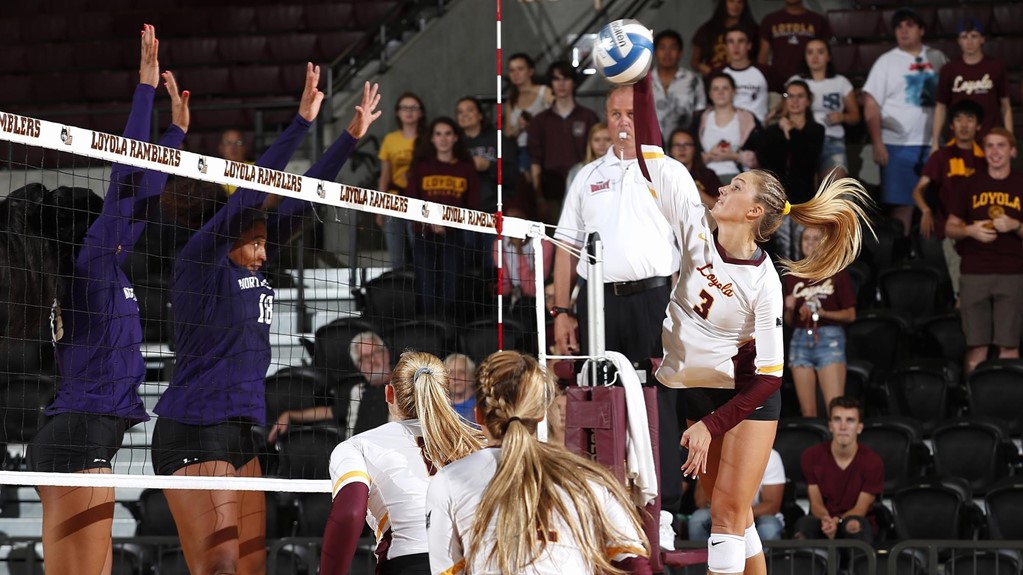 Elle Van Grinsven, So., MB, Loyola
Loyola’s Elle Van Grinsven averaged 3.38 kills, 2.12 digs and 1.25 blocks per set, while hitting a hearty .390 (27-4-59), to lead Loyola to a pair of road wins to open MVC play. The 2-0 start to league play marks the first time since joining the league in 2013 that the Ramblers have won their first two Valley matches of a season. Van Grinsven hit a staggering .556 (21-1-36) in a five-set win at Evansville on Frdiay posting career highs of 21 kills and 10 digs, while matching a personal best with six blocks. The sophomore then went on to contribute six kills, seven digs and four stuffs in a sweep of Indiana State the following evening. She has now totaled 10 or more kills in four of the Ramblers’ last five outings and for the year is putting up 2.75 kills, 1.04 digs and 0.96 blocks per set, while hitting at a .304 (140-39-332) rate.

Yavianliz Rosado, Sr., L, Bradley
Rosado averaged a team-best 5.57 digs per set in a pair of road wins to open MVC play for the Braves.  The libero also averaged nearly one assist per set and boasted a 98.4 serve receive percentage in 63 attempts in addition to helping Bradley hold its two opponents to a combined .138 hitting percentage.  Rosado tallied a match-high 21 digs along with two assists and an ace in a sweep of Southern Illinois as Bradley opened Valley play with a road win for the first time since 2005.  She followed it up with 18 digs and four assists in a four-set victory at defending MVC champion Missouri State, helping hold the Bears to a .138 attack percentage.  Rosado helped Bradley snap an 18-match losing streak in the series with Missouri State as the Braves earned their first road win against the Bears since 1999.

Hannah Thompson, Fr., OH, Bradley
Thompson collected a pair of double-doubles in the first two MVC matches of her career, helping Bradley to a pair of road wins.  She averaged 3.43 kills, 4.86 digs, 0.43 blocks and hit .278 in the two victories.  In Friday’s sweep of Southern Illinois, Thompson hit a blistering .429 with 10 kills and one error on 21 swings.  She also collected three assists, 10 digs and a block to help Bradley start Valley play with a road win for the first time since 2005.  Thompson collected 14 kills and a team-best 24 digs in a four-set win at Missouri State Saturday, also notching one assist, one ace and a pair of blocks.  The win at Missouri State was BU’s first in Springfield since 1999 as Bradley pushed its win streak to six (longest since 2005) in addition to pushing the team’s overall record to 12-2.