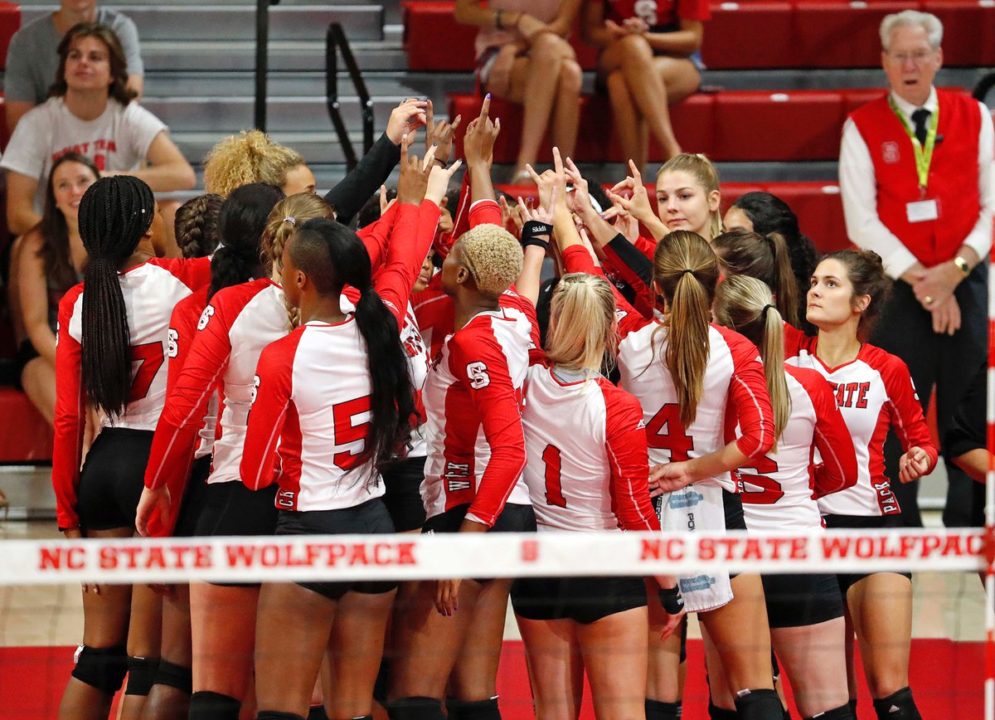 For NC State the schedule doesn’t get any easier this weekend, as the Wolfpack plays three teams that each recorded 20 or more wins last season. Current Photo via NC State Athletics

When third-year NC State Volleyball head coach Linda Hampton-Keith put together the schedule for 2018, she knew that the Wolfpack would be challenged right out of the gate. VCU and Washington State were 2017 NCAA Tournament teams, and both returned a strong core of players for this season.

In contrast, the Pack lost its top-three scorers from last season and its starting libero. Despite the challenge, NC State rose to the occasion in the opening weekend of the year to earn a 3-2 victory against Rams before coming up short against Washington State on Sunday, 3-1.

“We’re changing the perception and course of the program and we always want to make sure we’re putting ourselves in a position to play the top competition and put ourselves in the NCAA Tournament conversation at the end of the season,” said Hampton-Keith. “Regardless of the outcome, that’s what preseason is for to play teams outside of the conference that will challenge us and prepare us for the ACC play and give us a glimpse of what it’s like to be a top 50 or a top 25 program because that’s what we want to be. That’s our philosophy behind schedule tough opponents.”

The Wolfpack received everything it hoped from opening weekend, as VCU gave the squad a stiff challenge and forced the match to five sets after trailing 2-0. The Rams were 30-3 last season as the Atlantic 10 Conference Champion and were the unanimous preseason favorite in a vote by the league’s head coaches.

“Our passing has been a strength in practice, but it wasn’t as good as we need it to be on opening weekend. It could be first match jitters or a lot of other factors, but we need to spend our time and focus on serving and serve-receive because that’s where everything kind of makes or breaks you.”

In the fifth set of last Friday’s match against VCU, NC State recorded an 81 percent sideout rate. Of the 11 times that the Rams served, the Wolfpack won nine of those rallies. With the improved passing, NC State tallied a .250 team attacking percentage with only two errors.

“That was a huge win for us,” Hampton-Keith added. “That’s a signature win for us given that they’re heavily favored to win their conference again this year. I think that really sets the tone for us and the expectation of where we’re going. For us to start with a win, going five sets against a really good opponent is huge and I’m excited about that.”

The focus of practice this week has been serve-receive, as the Pack was able to run its offense and had success when the team was in system thanks to a great pass. For NC State the schedule doesn’t get any easier this weekend, as the Wolfpack plays three teams that each recorded 20 or more wins last season.

The SMU Mustangs finished the 2017 season with a 21-11 overall record, narrowly missing selection to the NCAA Tournament but the squad participated in the National Invitational Volleyball Championship (NIVC) in the postseason.

SMU dropped a pair of matches to Lipscomb and Iowa on opening weekend, but the Mustangs are a strong team that was picked to finish fourth in the American Athletic Conference (AAC).

NC State and SMU have met twice in the history of the programs with the Wolfpack winning the most recent matchup in 2016, 3-2, inside Reynolds Coliseum. The Mustangs won the other meeting at a neutral site in 1999.

The Mustangs own a pair of Preseason All-Conference Selections in senior outside hitter Brittany Adams and junior setter Kendall Patterson.

Creighton began the season ranked No. 13 in the American Volleyball Coaches Association (AVCA) Top-25 Poll and the Bluejays are ranked No. 15 this week. Creighton opened the season with a 3-2 victory against fifth-ranked Kentucky at the Trojan Invitational hosted by USC.

The Bluejays lost its other two matches of the weekend, falling 3-0 against a very good Northern Iowa squad that was unranked to start the year but checks in at No. 17 in this week’s poll. USC also defeated Creighton with 3-2 win in the last outing for the squad.

Creighton was picked to finish second in the Big East Conference preseason poll behind Marquette. The Bluejays placed three student-athletes on the Preseason All-Big East Team including senior outside hitters Taryn Kloth and Jaali Winters, along with junior libero Brittany Witt.

Friday’s match will be the first meeting between the programs.

Arkansas State turned in a strong 2017 season, as the Red Wolves were 21-12 and advanced to the second round of the NIVC. This year ASU is 2-1 on the year with 3-0 wins over Memphis and Arkansas-Pine Bluff.

NC State and Arkansas State have met three times in the history of the programs with NCSU owning a 2-1 advantage in the all-time series. The Red Wolves won the last meeting, which was also at a neutral site, 3-0 in 2016.

NC State is heading back to Texas this weekend, after the Wolfpack earned its first NCAA Tournament victory last season in Austin. Also, three players on the NC State roster hail from the state of Texas: Kaylee Frazier, Nailah Gordon and Kylie Pickrell.