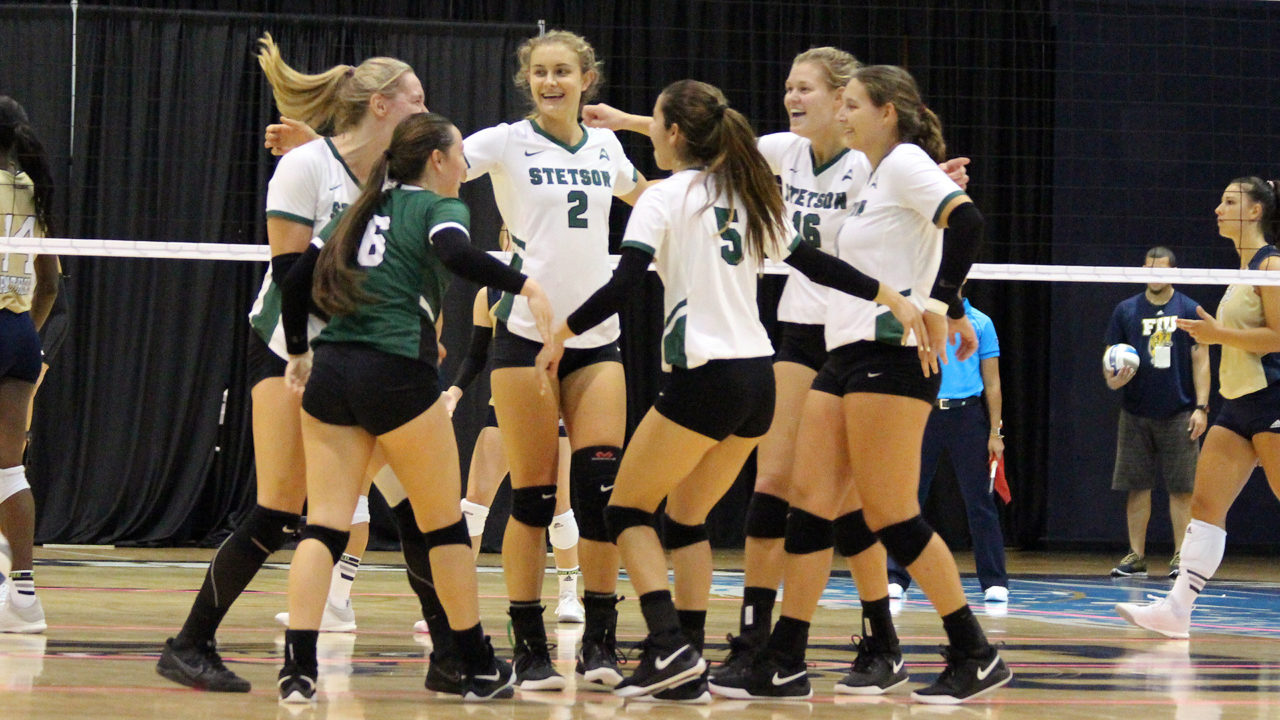 After an exciting first weekend of action last week including two upsets of Power 5 teams, the ASUN Conference Volleyball non-conference slate heats up this weekend with all nine squads in action.  Current Photo via Stetson Athletics

ATLANTA – After an exciting first weekend of action last week, the ASUN Conference Volleyball non-conference slate heats up this weekend with all nine squads in action.

Liberty, Lipscomb and North Florida all get their shot at Power 5 opponents, a week after the league saw FGCU and Lipscomb take down Miami and Iowa respectively. Stetson (3-0) aims for their best start in program history on Friday when they take on Troy, while Kennesaw State and Lipscomb look to defend their perfect records.

The conference as a whole picked up 11 wins in the first weekend of the season and look to build upon that going into week two. This weekend 11 games will be broadcasted with several on ESPN3 and ESPN+. Check out our full schedule for live stat and video links.

Jacksonville Dolphins (0-3)
Twitter: JAX_Volleyball
Weekend Matches: vs. Presbyterian (8/31; 11 AM); vs. High Point (8/31; 5 PM)
Last Three Matches: vs. San Jose State (L, 3-0); at USF (L, 3-2); vs. Stony Brook (L, 3-2)
– The Dolphins travel to Kennesaw, Ga. for doubleheader against Presbyterian and High Point
– Jacksonville is 2-1 all time against Presbyterian, winning last year’s matchup 3-0
– This will be the first-ever matchup between the Dolphins and High Point
– Mallory Mattingly has posted three-straight double-digit kills matches to start the season

Liberty Flames (1-2)
Twitter: @LibertyWVB
Weekend Matches: vs. South Carolina (8/31, 11 AM); vs. Houston Baptist (8/31, 5 PM); at Rice (9/1, 12 PM)
Last Three Matches: at Purdue-Fort Wayne (L, 3-1); vs. Oakland (W, 3-2); vs. Indiana State (L, 3-1)
– Liberty travels to Houston for the Rice Adidas Invitational this weekend; their first trip to the state of Texas since 2004
– The Flames look to pick up their first wins against South Carlina and Rice, while they’re 1-0 against Houston Baptist
– Head Coach Trevor Johnson picked up his first win as a D-I head coach last weekend with a win over Oakland
– Middle blocker Anna Gragg leads the team with 30 kills. She’s also second in blocks with 11

Lipscomb Bisons (2-0)
Twitter: @LipscombVball
Weekend Matches: at Arizona (8/31, 12 PM CT); vs. Pacific (8/31, 6 PM CT); vs. San Diego State (9/1, 12 PM CT)
Last Three Matches: vs. Iowa (W, 3-2), vs. SMU (W, 3-0)
– The Bisons opened up at No. 11 in VolleyballMag.com’s first Mid-Major Poll of the Year
– Lipscomb went 2-0 in season’s first weekend with wins over SMU and Iowa
– Carlyle Nusbaum posted back-to-back double-doubles to start the season en route to ASUN Player of the Week
– The Bisons hosted Arizona last year and defeated them 3-2; this will be their second meeting ever with both Pacific and San Diego State

NJIT Highlanders (0-3)
Twitter: @NjitVolleyball
Weekend Matches: at St. Francis Brooklyn (8/31, 3 PM); vs. Delaware State (9/1; 11:30 AM); vs. Bucknell (9/1, 4:30 PM)
Last Three Matches: vs. St. Peter’s (L, 3-2); vs. Youngstown State (L, 3-2); at Bucknell (L, 3-0)
– The Highlanders search for their first win this season as they travel across the river for the Terrier Clasic at St. Francis Brooklyn
– NJIT is on a five-game win streak with their last loss coming back in 2014
– Senior libero Adriana Nieto posted a game-high 43 digs last weekend against St. Peter’s
– Freshman outside hitter Udo Nwosu recorded her first-career double-double of 15 kills and 12 digs against St. Peter’s

North Alabama Lions (0-3)
Twitter: @RoarLions_UNA
Weekend Matches: vs. Tennessee State (8/31, 2 PM CT); vs. UNC-Asheville (9/1, 9 AM CT); at Chattanooga (9/1, 6 PM CT)
Last Three Matches: vs. Mercer (L, 3-2); at Jacksonville State (L, 3-0); vs. Little Rock (L, 3-0)
– The Lions search for their first win as a Division I member when they travel to Chattanooga for the Chattanooga Classic
– Sophia Brandstetter and Christina Ellwanger combined for 61 kills last weekend
– Jayden Davila-McClary leads the team with 55 assists and 5.55 assists/set
– Genesis Benitez ranks fifth in the ASUN in digs/set at 3.82