The eight-team field will face off in a double-elimination bracket beginning at 10 a.m. ET Friday. Matches will be streamed live on NCAA.com and some will air on truTV beginning at 3 p.m. Archive Photo via USC Athletics

The double-elimination tournament bracket is as follows:

Friday (beginning at 3 p.m. ET) and Saturday’s matches will air on truTV, while Sunday’s championship round will air on TBS. Anne Marie Anderson will be on the call, while Holly McPeak will provide color commentary. Camryn Irwin and Yogi Roth will report. The NCAA also will stream each match on NCAA.com.

USC is the two-time defending national champion, winning the AVCA title in 2015 and inaugural NCAA crown in 2016. The Trojans went 34-1 en route to the Pac-12 crown this season, led by top pair Kelly Claes and Sara Hughes, who boast a 136-4 career mark and won 103 straight matches until April 8. The Trojans dropped their lone match of the season in the Pac-12 tournament, falling to UCLA before rebounding to beat the Bruins in the championship.

For its part, South Carolina is making its NCAA Tournament debut after facing 13 Top 15 ranked opponents. The team set a program record for wins in a season (23) and defeated five ranked foes. The Gamecock squad including Carly Schneider and Katie Smith, who won the AAU Junior National and USA Volleyball Junior Tour titles as prepsters. Junior Macie Tendrich, who is just 5-foot-3, who plays two, three and fours with Katie Zimmerman also highlights the roster.

The Seminoles defeated the Rainbow Wahine 3-2 in Honolulu on March 17, giving Hawai’i its first loss of the season.

Hawaii went on to win the Big West title and is competing in its fourth straight championship event. Hawaii has won 11 of its last 12 matches. The Rainbow Wahine are led by top pair Morgan Martin/Mikayla Tucker (19-12). Two other pairs boast more than 20 wins: No. 2 Ka’iwi Schucht/Nikki Taylor (24-7) and No. 3 Emily Maglio/Laurel Weaver (28-3).

Florida State, last year’s runner-up, won the Coastal Collegiate Sports Association title and brings a 27-7 mark into the tournament. Twenty of the team’s 27 wins came against ranked foes and the team has won nine of its last 10 matches. Leigh Andrew and Brooke Kuhlman are 14-10 in the No. 1 spot this year. Victoria Paranagua and Macy Jerger boast the best record on the team with a 19-7 mark, including 17-7 at the No. 3 position.

UCLA defeated LSU 3-2 in the East Meets West Invitational on March 11, with two of the three Bruin wins coming in three sets.

UCLA (29-4) was the runner-up in the Pac-12 Tournament, snapping USC’s 62-match win streak in the semifinals, before falling to the Trojans in the finale. The Bruins’ top pair of Nicole and Megan McNamara was named first team All-Pac 12 for the second straight year after posting a 26-6 record. No. 2 duo Kamila Tan and Madi Yeomans were second team all-Pac 12. UCLA coach Stein Metzger was Pac-12 Coach of the Year.

LSU (26-6) is making its NCAA Beach debut after falling to Florida International in the CCSA Tournament semifinals. No. 1 pair Kristen Nuss/Claire Coppola earns all-CCSA honors after going 26-6 on the year. No. 3 Katie Lindelow and Olivia Powers are 24-3 on the year, including a current 14-match win streak, and wins in 24 of their last 24 matches.

Pepperdine has a 2-0 advantage in the season series with LBSU, winning 3-2 on March 16 at the Baden Invitational in Long Beach and on April 5 in Zuma Beach.

The Waves (24-3) earned their second straight West Coast Conference Championship title. No. 1 pair Delaney Knudsen and Madalyn Roh are 18-9. Pairs 2, 3 and 4 each boast more than 20 wins. No. 2 Corinne Quiggle /Brittany Howard are 24-3, while No. 3 Skylar Caputo/Heidi Dyer and No. 4 Deahna Kraft/Anika Wilson are each 22-5. Howard, Knudsen, Quiggle and Roh were named first team All-WCC, while head coach Nina Matthies was Coach of the Year. Pepperdine won the 2012 and 2014 AVCA national titles and was runner-up in 2015.

Long Beach State (26-8), led by Big West Coast of the Year Mike Campbell, is making its NCAA Beach Championships debut after earning the AVCA national title in 2013 and runner-up finishes in 2012 and 2015. Long Beach State was runner-up at the Big West Tournament, falling to Hawai’i 4-1 in the title match. All five of its duos have won more than 20 matches in 2017, led by top pair Rachel Nieto/Nele Barber, who went 25-9 en route to first team All-Big West honors. Sasha Karelov/Kobi Pekich also garnered first team honors after posting s 22-12 mark on the year (20-12 at No. 2). No. 5 Jenelle Hudson and Megan Kruidhof, honorable mention Big West selections, boast a team-best 27-4 record (26-2 at No. 5). 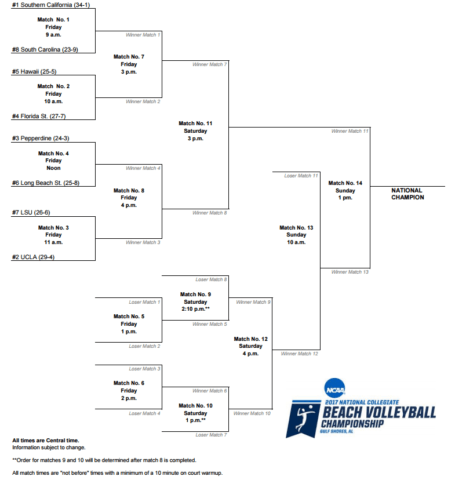