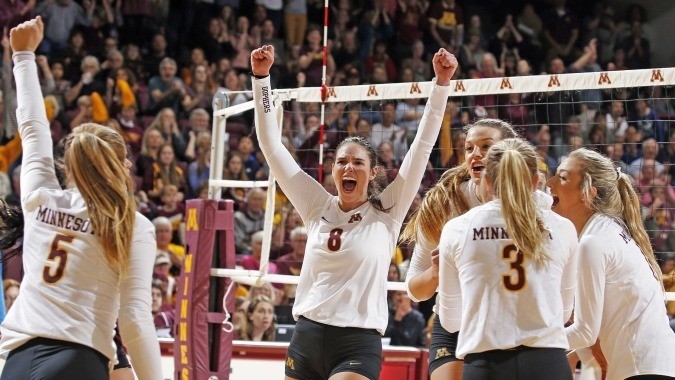 Minnesota gets a rematch with border rival North Dakota in a bracket that features the SEC and ACC champs. Archive Photo via University of Minnesota Athletics

Earlier tonight, the NCAA announced the first-round matchups and host sites for its 2016 National Championship Tournament. Here’s a quick look at the matchups in the bottom right of the bracket:

Here is the bottom right quarter of the bracket! #NCAAVB pic.twitter.com/r21NVqpgrH

It’ll be a border battle in Minnesota’s bracket, with the North Dakota Fighting Hawks heading to Minneapolis for their first-ever NCAA Tournament appearance. The Gophers are streaking after beating #1 seed Nebraska and #3 seed Wisconsin last week to end the regular season.

A pair of teams that went deep into the tournament last year meet in round 1. USC was the #1 seed a year ago but is unseeded this year after going just .500 in the Pac-12. Hawaii won the Big West and could face a rematch with Minnesota (who knocked out the Rainbow Wahine in the quarterfinals last year) as early as round 2.

Missouri won the SEC in the eleventh hour, passing up Kentucky and winning a tiebreaker with Florida. They’ll face NIU, which makes its first NCAA Tournament appearance since 2011 after winning the MAC.

A couple of perennial NCAA Tourney participants here: Iowa State has played in 11 straight postseason tournaments, while Purdue has been to 11 of the last 13. Iowa State is surging, having won 8 of its last 9, including an upset of #4 tourney seed Texas. Purdue has been beat up in the tough Big Ten lately, but does have a big win over Big 12 champs Kansas to its credit. Kansas swept Iowa State this year.

High Point rolled through the Big South Tournament to win its second-ever conference title, and will now take on UNC, which won the ACC. It was a tough year for the ACC, with only three teams making the tournament (UNC, Florida State, Pitt). A High Point win could set up a rematch with Coastal Carolina, which won the Big South last year but moved conferences this season.

A pair of mid-major conference champs meet in this one. Coastal Carolina won the Sun Belt this year in its first year in the conference. They won the Big South a year ago. The Chanticleers have won 17 straight matches this season. One more win would be a program record. James Madison, meanwhile, won the CAA to earn its third NCAA appearance in Division I and its first since the year 2000. The two programs have met only twice in history, with James Madison winning both matches – first in 1991 and again in 2011.

Murray State gets a return trip to the NCAA Tournament after making the cut in 2014 but missing in 2015. They draw UCLA, who just missed the Pac-12 title, losing what turned out to be the conference decider last week at Washington. UCLA made a run last year as a 14 seed and will host this match and the next round’s matchup.

We had Baylor as one of our first 8 out after the Bears lost 3 of 4 to end the season. But those turned out to be quality losses to NCAA tournament participants (including a 2-3 loss to Big 12 champs Kansas) and Baylor made the cut. San Diego gets a pretty solid draw here after just missing the WCC title. A road loss to Pepperdine put San Diego out of the running and handed the title to BYU, which ended up as a 13-seed.