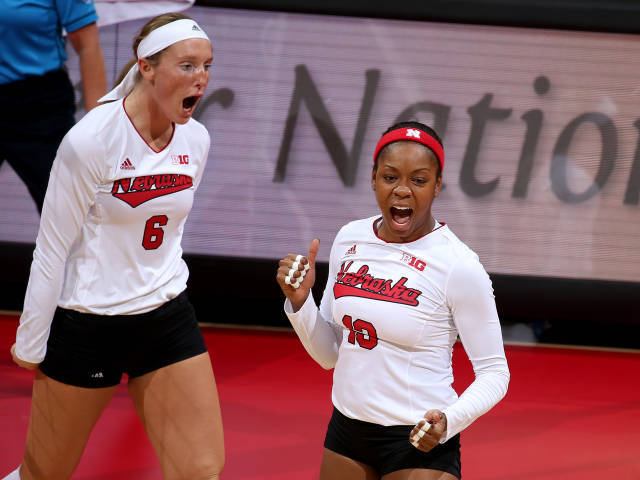 Nebraska's portion of the bracket is loaded, with the winners of 9 of the past 11 NCAA titles all contained in one 16-team grouping. Archive Photo via Nebraska Athletics

Earlier tonight, the NCAA announced the first-round matchups and host sites for its 2016 National Championship Tournament. Here’s a quick look at the matchups in the top left of the bracket, featuring #1 seed Nebraska:

Here is the top left quarter of the bracket! #NCAAVB pic.twitter.com/KBhgvLFDIw

Nebraska begins its NCAA title defense in a loaded bracket and could meet 2013 and 2014 NCAA champs Penn State by the third round. America East champs New Hampshire get easily their toughest test of the year, but enter the tournament on a 10-match win streak that comprises a 30-4 set record.

Wichita State stole the Missouri Valley title from Missouri State Saturday, but might have wound up in a tougher bracket. A win over TCU would likely set up a rematch with Nebraska, which ended Wichita State’s season in a sweep last year. TCU, meanwhile, will get another shot after nearly upsetting Hawaii in the opening round a year ago.

Penn State gets NEC champs LIU Brooklyn in the first round. LIU Brooklyn started the season 0-6 but rallied back to a winning overall record (16-14) and a conference title. Penn State is battle-tested from arguably the NCAA’s toughest conference and only finished behind top-4 seeds Nebraska, Minnesota and Wisconsin in the conference.

Pitt will show down with Atlantic-10 champ Dayton at a neutral site (Penn State). Dayton was 30-1 this year, but only played one NCAA tournament team – Miami. Pitt, meanwhile, has a couple of massive upsets to its credit, including ACC champs UNC.

26-4 and sole Pac-12 champs Washington will battle Southland Conference champs Texas A&M Corpus Christi. Washington, too, could see a rematch of the game that ended its 2015 season, as three wins would likely pit the Huskies against Nebraska in the quarterfinals. Corpus Christi went undefeated in its conference, but dropped 7 matches in non-conference play, including sweeps against most ranked opponents.

Kentucky led the SEC late, but faltered and wound up with a tough bracket slot. Colorado State was a bubble team, but made the tournament despite losing the Mountain West title for the first time since 2008. Both teams bowed out of the tournament in round 1 a year ago.

MAAC champs Fairfield will head to East Lansing, Michigan to take on Michigan State, coming off a nation-leading 22-match win streak. 18 of those 22 wins came within the MAAC, though, and Fairfield was 10-5 outside the conference this year. Michigan State won’t see Washington in the 2nd round like they did last year, but could meet the Huskies by round 3 if both teams win out.