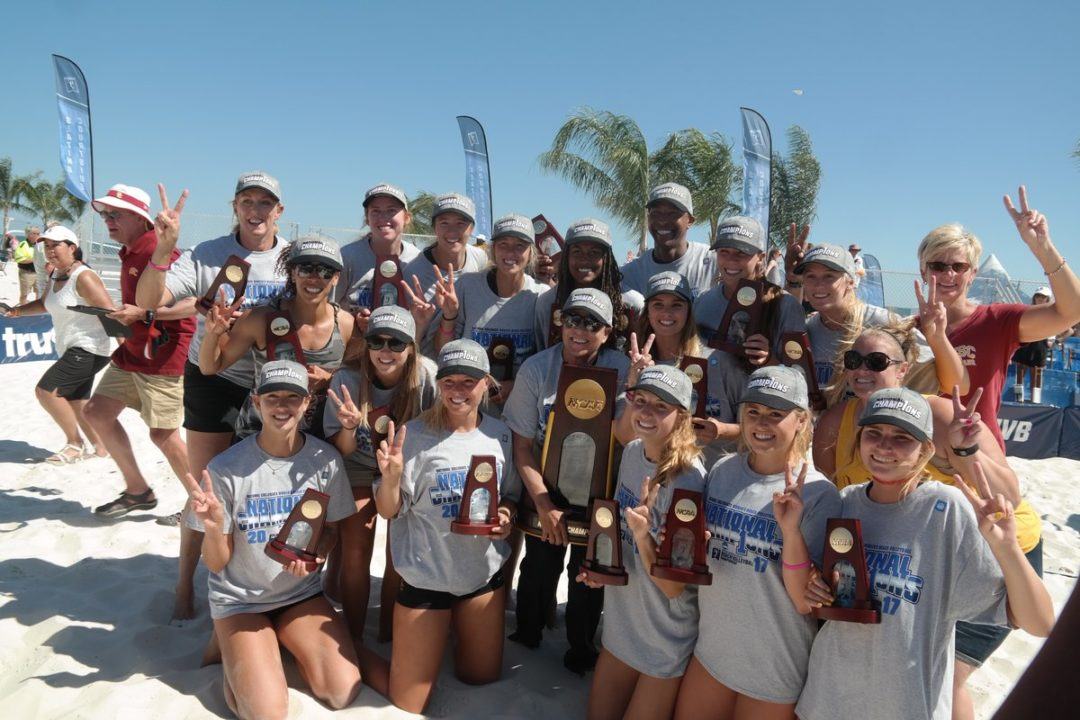 The Trojans won the match with a 15-13 Set 3 victory by Pair 3, Terese Cannon and Nicolette Martin. Current Photo via NCAA Volleyball

The top seeded USC Trojans are NCAA Beach Volleyball Champions for the second straight year after edging No. 3 seed Pepperdine 3-2 Sunday afternoon in Gulf Shores, Alabama. The duel came down to a 15-13 score in the third set of the final pairing. Terese Cannon and Nicolette Martin nabbed USC the title with a cross court shot just inside the line.

When USC and Pepperdine met on Saturday, USC won the 1, 3 and 4 pairs. On Sunday, the Trojans won pairs 1, 3 and 5 en route to the title. Unlike previous matches which featured five simultaneous courts, the championship began a staggered start, beginning with courts four and five.

The remaining three matches all went to decisive third sets bringing the match to an exciting climax on court three.

The Waves took the first set on courts one and two, while the Trojans nabbed a 21-19 win to start court 3 action. USC battled back to take the second set on courts one at two, while Pepperdine answered with a 21-18 win on court 3. Brittany Howard and Courtney Quiggle claimed a 15-13 win on line 2, putting the Waves up 2-1 in the match. USC’s top pair Kelly Claes and Sara Hughes returned the favor with a 15-10 win on court 1.

It all came down to court three, where Cannon and Martin registered a 21-19 comeback win in Set 1 and fell short to Pepperdine’s Skylar Caputo and Heidi Dyer 21-18 in Set 2. Cannon/Martin went up 12-10 in Set 3. The Waves stayed close, but Cannon’s final kill gave USC the 15-13 win and the national title.