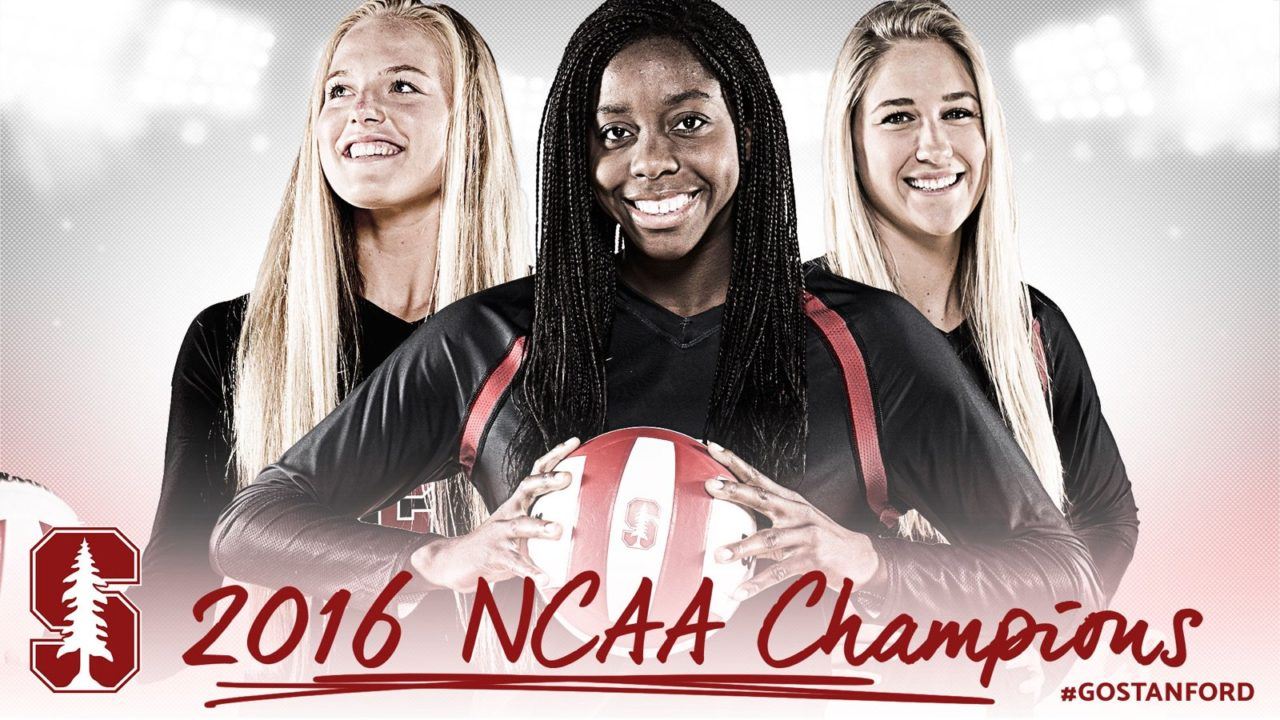 The Stanford Cardinal have ridden the youngest roster in final four history to the 2016 NCAA title. The journey was... Archive Photo via Stanford Athletics

The Stanford Cardinal have ridden the youngest roster in final four history to the 2016 NCAA title.

The journey was not a smooth one. The team overcame a big slump in the middle of the season, the Cardinal had to completely re-work their strategy from a 6-2 to a 5-1 in the middle of a game mid-season.

The Cardinal relied heavily on freshmen this season. Senior All-American Inky Ajanaku said it best, though, when she said that mid-season, she stopped treating the freshmen like freshmen, and started treating them like seniors, because that’s how far they’d come.

Jenna Gray, just a freshman, emerged as the team’s starting setter, forcing Kelsey Humphreys, who sat for three years waiting for her chance, to refocus as a defensive specialist in her senior season. The move, while crushing for Humphryes, was what the team needed as they pulled themselves out of a 4-in-6 losing crunch in October.

But what really brought the team together was the veteran, the right veteran Ajanaku and her leadership. Ajanaku injured her ACL before last season while competing with Team USA, and missed the whole year. During that year, aside from rehabbing, she worked on her mental game and developed her leadership skills. She focused not on the power that comes from the shoulder, but the power that comes from above the shoulders.

Stanford played a different brand of volleyball than anyone else in the country. They have one of the biggest teams in recent memory (even their setter, Gray, is 6’1″and she had a hand in at least 2 blocks, and as many as 6, in each of the Cardinal’s last 5 NCAA tournament games). They were a matchup nightmare in December. Even a team like Minnesota, in the semi-finals, one of the fastest teams in the country, which should counteract Stanford’s size, couldn’t get into a rhythm. They forced matchup nightmares, and they forced other teams to press and play Stanford’s game more than their own.

John Dunning affirmed his anointment earlier in the week as the national coach of the year, which now seems prophetic after a 7-loss season that was not the Cardinal’s best regular season ever.

With the win, Stanford ties Penn State for the most championships in NCAA history at 7 – the last line-item that had left any argument against them as the best program in NCAA history. They and Penn State are the only teams to never miss the tournament, Stanford has the most NCAA tournament wins ever (115), and the most NCAA runner-up finishes ever (8). After a 12-year drought, since their last title in 2004, Stanford is back at the pinnacle and has regained their throne atop of the collegiate volleyball world.

Congratulation to Stanford on their 2016 Women’s NCAA Division I Championship.