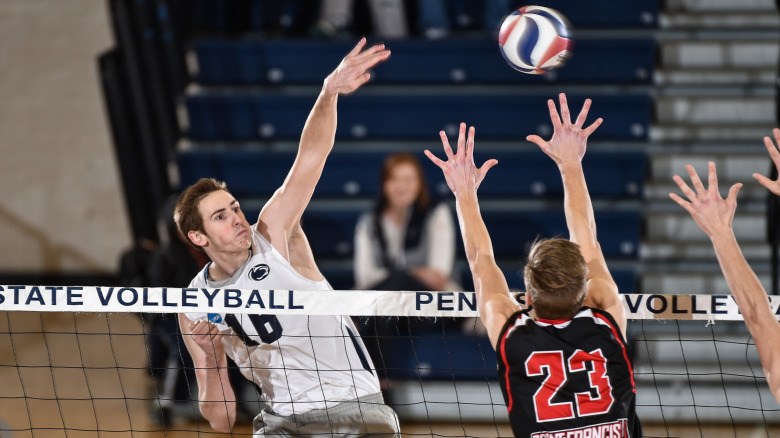 The Nittany Lions remained atop the EIVA standings with the 3-0 win over the Crimson on Saturday.  Archive Photo via Penn State Athletics

No. 12 Penn State stayed firmly atop the EIVA standings with a sweep of Harvard in Cambridge, Massachusetts on Saturday night. The Nittany Lions won the match 25-22, 25-20, 25-21 to move to 9-3 overall, keeping them a game up on Saint Francis (8-4) in the league standings with a week to go.

Five different players chipped in kills as Penn State raced out to a 10-4 lead in Set 1. A block by Mende and Callaway and a kill by Nugent made it an eight-point game at 14-6. The Crimson cut the margin to two at 17-15 on an ace by White. An ace by Johnson pulled Harvard within one at 20-19. The teams traded points over the next six serves before a kill and a block by Gear capped the 25-22 PSU win.

Trailing 9-8 in Set 2, Harvard rallied with six of the next seven points, including two aces and kills by three different players, to go up 14-10. The Crimson maintained the lead at 16-14, but PSU turned the tables with an 11-4 set-ending run. A trio of blocks and help from four Harvard service errors aided the Nittany Lion effort.

Mende posted three kills as the teams split the first 18 points of Set 3. Penn State scored five of the next seven points, including two Callaway blocks, to go ahead 14-11.  A kill and a block by Johnson pulled Harvard even at 17-all. PSU upped its lead to four at 22-18. The teams traded points the rest of the way until Gear ended the match at 25-21 his final kill.

Calvin Mende finished with a line of 14 kills hitting .462 while adding seven digs and three blocks on the night. Luke Braswell led Penn State in assist with 35 while Royce Clemens recorded a team-high 10 digs. Matt Callaway led the team behind the service line racking up two service aces helping the Nittany Lions finish with three for the match. Callaway and Braswell led the Lions in blocks notching four apiece helping Penn State record 10.5 team blocks against the Crimson.

Penn State hit .349 for the match while Kevin Gear was the match leader hitting .875 finishing with seven kills on eight attacks adding four kills on the night.

The sweep by Penn State is their sixth of the season and completes the season sweep of Harvard following a 3-0 sweep earlier this season at Rec Hall.

The Nittany Lions return home to Rec Hall to complete the regular season schedule with matches slated for Friday Apr. 14 vs. Charleston (WV) followed by a Saturday night match with the Patriots of George Mason Apr. 15 at 7 p.m. ET.

Riley Moore pace the Crimson (9-12, 6-6 EIVA) with nine kills, while Erik Johnsson added eight kills and one service ace to the board. Johnsson earned his 200th career kill in the match against the Nittany Lions. Trevor Dow registered three stoppers against Penn State, while Matthew Ctvrtlik added seven digs to assist the Crimson defense. The Nittany Lions (17-10, 9-3 EIVA) escaped with an early lead, 14-6, but the Crimson caught up with kills from White and Dow, 15-11. Trevor Dow split the Nittany Lion defense with a kill to bring the Crimson within three points, 17-14, but Penn State captured the set point with a block from Kevin Gear and Luke Braswell.

Both teams traded points for the first 16 points of the second stanza, until a kill from Marko Kostich gave the Crimson the momentum to begin a 6-1 run, leading the Nittany Lions by three points, 14-11. Penn State fought back to tie the set at 15 apiece, but consecutive kills from the Nittany Lions pushed them ahead, 18-16. Although White and Kostich earned kills in the last stretch of the set, the Crimson fell to the Nittany Lions, 25-20.

The Nittany Lions jetted off with a 6-4 lead early in the third set, but three consecutive attacking errors gave the Crimson the advantage, 7-6. The two teams went points for point for the next four serves, but a block from Calvin Mende and Matt Callaway pushed the Nittany Lions ahead 13-10. Harvard pressed back with three consecutive points, including a block from Dow and Johnsson, but the Nittany Lions capitalized on two Harvard attacking errors to gain a three-point lead, 20-17. Penn State took the third set, 25-21.

Harvard will close out its regular season on the road, facing Princeton on April 14 at 7 p.m. and NJIT on April 15 at 4 p.m. For a full archive of tonight’s match, please see the Ivy League Digital Network.