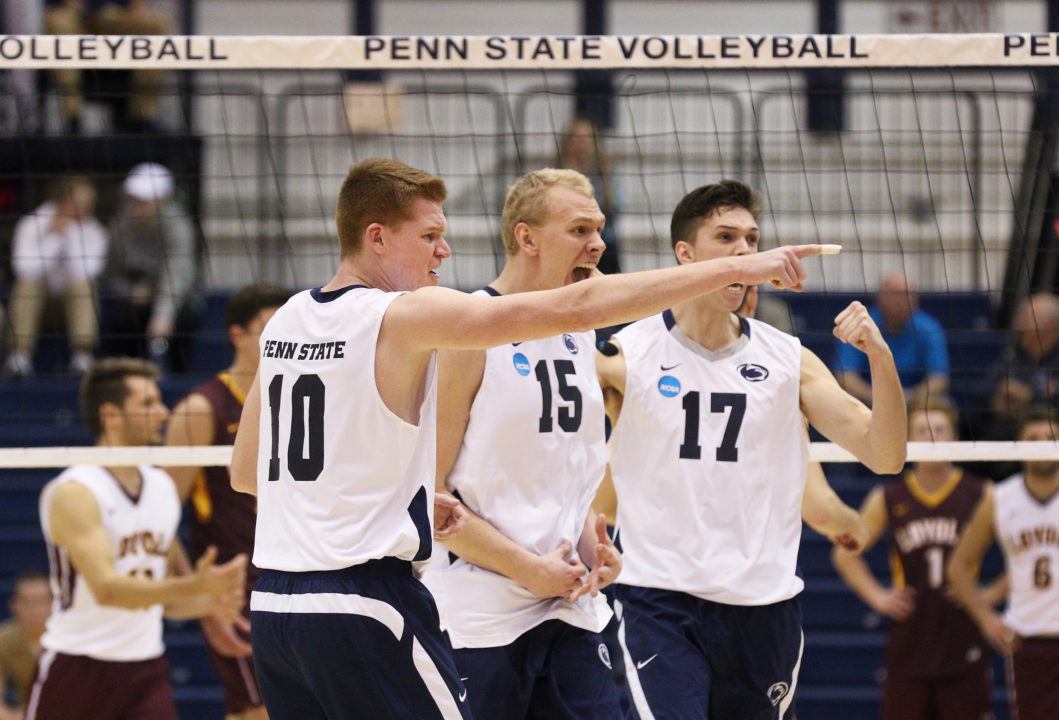 In the decisive fifth set, six OSU errors and a block gave Penn State an 8-4 lead at the changeover. Ohio State bounced back with seven of the next nine points to claim an 11-10 edge of its own. A trio of blocks aided the comeback. Back-to-back kills by redshirt junior middle Kevin Gear put PSU back on top at 12-11, kicking off a 5-1 run to close out the upset. Senior outside hitter Chris Nugent pounded down the final two kills.

“It was a good all-around match,” head coach Mark Pavlik said. “We have to carry this confidence, focus and intensity into this weekend.”

Nugent led the PSU effort with 19 kills on a .515 hitting effort. Redshirt junior outside Aiden Albrecht and redshirt junior opposite Jalen Penrose also turned in double-digit tallies with 14 and 10 respectively. Nugent nearly finished off a double-double with eight digs, while Albrecht and Penrose pulled up seven apiece. Freshman setter Nathan Smith led a balanced defensive effort with 10 digs to go with his 39 assists and four blocks. At the net, redshirt senior middle blocker Matt Callaway put up a team-best six blocks.

The Nittany Lions took a four-point lead in Set 1 at 9-5. Ohio State made it a two-point game at 12-10, but PSU pushed the advantage to five at 17-12. An overturned call on a PSU challenge and an OSU miscue put the Nittany Lions ahead by six at 23-17 prompting a Buckeye timeout. Ohio State scored four straight out of the break, including a triple block and an ace, to make it 23-21. A kill by Nugent and an ace by Smith secured the Penn State win.

The tables turned in Set 3 as the Buckeyes hit at a -.080 clip, with eight kills and 10 errors in the stanza. For its part, Penn State hit .333 and put up five blocks. The Nittany Lions led 16-6 midway through the set and traded points from there on out as PSU won easily 25-15.

The teams were tied at 15-all midway through Set 4. Ohio State worked its way to a 20-17 lead with help from aces by Hervoir and Thomas. A block by Callaway pulled PSU within one at 23-22, before a Johnson kill and Hervoir ace sent the match to a decisive fifth set.

Tonight’s win over Ohio State marks the first time Penn State has defeated the No. 1 team in the nation since May 4, 2006 when the Nittany Lions upset the then-No. 1 UC-Irvine Anteaters in the semifinals of the NCAA Championship tournament in Rec Hall.

“When you come into a match with the Buckeyes, you know it’s going to be a pretty physical match, ” said head coach Mark Pavlik.

Entering the fifth set tied 2-2, Penn State bolted to a 2-0 advantage in the deciding fifth game with a kill by Albrecht and an attack error by the Buckeyes. Ohio State tried to find their way back early in the set; but, Penn State forced a Buckeye timeout as the Nittany Lions earned another set of back-to-back points to take a 6-3 lead.

Nugent provided the eighth-point of the set giving Penn State an 8-4 lead and triggering the switch of sides’. Ohio State battled back as came within one point of Penn State, forcing the Nittany Lions to take a timeout while leading 8-7.

Tied at 10-10, the teams preceded to trade points before Albrecht and Nugent dished out consecutive kills to give Penn state a 14-12 lead and force Ohio State’s second and final timeout of the set.

The timeout did not hinder the Nittany Lions, as Nugent was able to find his 19th kill of the match, giving Penn State a 3-2 win over Ohio State.

Freshman Nathan Smith recorded a double-double performance with 39 assists and 10 digs for the Blue and White.

Penn State out-dug the Buckeyes 42 to 35, led by a match-high and career-high 10 digs from freshman Nathan Smith. Redshirt sophomore libero Royce Clemens and Nugent tied for the second highest dig total on the team with eight digs apiece.

Tonight’s win moves the Nittany Lions’ overall record up to 14-9 and 8-7 in non-conference play.

The teams met once earlier this season, with Ohio State capturing a 3-0 win on January 24, 2017 in Columbus, OH.

Penn State returns to action this weekend as they host Princeton Tigers Friday Night, followed by a Saturday night match against the Highlanders of NJIT at Rec Hall. Both matches are slated for a 7 p.m. serve.

The defeat snaps a 20-match winning streak for Ohio State in true road matches. The Buckeyes hadn’t dropped a contest inside an opponent’s home gym since 2015.

Set 1: Eleven unforced errors, including eight from the service stripe, doomed Ohio State in set number one. After falling behind 3-0, the Buckeyes continuously shot themselves in the foot to thwart any kind of comeback completion. The scoreboard momentarily read 21-18 before a successful video review challenge by Penn State showed the Buckeye block did, indeed, touch a PSU attack soaring long. The scoring swap handed the NIttany Lions a five-point edge at 22-17, and they would ultimately close out the set, 25-21.

Set 2: A resounding response came from Ohio State in the second stanza to even the match, 1-1, heading to intermission. The Buckeyes attacked .696, terminating 16 of 23 errorless attempts. Ohio State passed much better in set number two, leading to a sizzling sideout rate of 86 percent (13-15). Christy Blough recorded a kill and assisted on 14 of the Ohio State’s other 15 kills in a dominating 25-14 final tally.

Set 3: Penn State rebounded impressively as well, coming right back with a convincing win of their own in the third. The Nittany Lions raced out to leads of 7-2 and 16-6, both forcing Ohio State timeouts. Penn closed it out moments later by a 25-15 final ledger.

Set 4: The evening’s first tightly-contested set finally arrived in the fourth. The lead exchanged hands three times and sat tied on nine occasions. Despite being out-attacked by nearly a 2:1 margin (.304:1.54), the Buckeyes mustered a hard-fought 25-22 equalizer. Ohio State was the beneficiary of seven Nittany Lion serving blunders. A three-point spurt midway through the set pushed the Buckeyes ahead for good at 15-14.

Set 5: Heightened drama did little to derail the back-and-forth play of the fourth spilling into the final frame. Ohio State stormed back from an 8-4 deficit to go on top, 11-10, following back-to-back stuffs from Miles Johnson and Blake Leeson. Unfortunately the upper hand was short-lived as PSU snagged five of the next six points to clinch the match triumph, 15-12.

Ohio State gets back after it this weekend, playing hosting to MIVA foe McKendree University in a pair of 7 p.m. home matches (March 31-April 1).