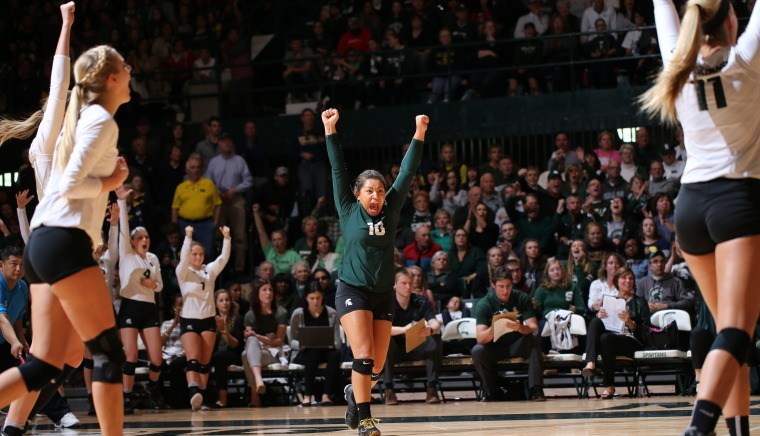 With a team-high 17 digs, Abby Monson was one of many senior contributors to Michigan State's straight-set victory over Auburn. Archive Photo via Courtesy Michigan State Athletics

ATLANTA, Georgia – In each team’s second match at the Hyatt Regency Invitational on the campus of Georgia Tech, the No. 19-ranked Michigan State Spartans swept Auburn in straight sets.

Michigan State started the day with an all-senior lineup, including outside Holly Toliver, who finished with a team-high 12 kills, as well as seven digs and four blocks. Middle blocker Alyssa Garvelink was huge at the net with seven total blocks, setter Rachel Minarick put up 26 assists and three aces, while Abby Monson anchored the back row with a team-high 17 digs.

The Auburn Tigers, slated to finish 5th in the SEC preseason coaches’ poll, were led by senior outside Macy Reece with seven kills and senior libero Jesse Earl, who contributed 13 digs.

Neither team hit well in the first, with Michigan State at .115 and Auburn at -.029. Toliver paced the Spartan offense with four kills and a .333 clip. Both Michigan State outside Autumn Bailey and the Tigers’ Jesse Earl had two aces apiece in the opening frame, which Michigan State won comfortably 25-16.

The second set was tight early as the teams stayed within two points until mid-set when the Spartans built a four-point cushion at 16-12 on an ace by Brooke Kranda that led to an Auburn timeout. Auburn, however, refused to go quietly, cutting the lead to 18-17 on a Karis Beasley ace before eventually dropping the frame 25-19.

In the third, the Spartans jumped out to a 7-1 lead and maintained that lead throughout, finishing with a Holly Toliver ace on match point.

Michigan State concludes its time in Atlanta when they take on tournament host Georgia Tech on Saturday night at 8 p.m. ET, while Auburn looks to get its second win of the season against Furman at 6 p.m. ET.

Senior Holly Toliver led MSU with 12 kills on 30 swings, contributing three aces and seven digs along with four blocks. Alyssa Garvelink had seven blocks (one solo) after a nine-block effort on Friday, and added five kills.Autumn Bailey a nd  Brooke Kranda each had six kills, while setter Rachel Minarick had 26 assists and three aces. Senior libero Abby Monson led all players with 17 digs.

For Auburn, Macy Reese had seven kills, hitting .222 and adding a block. Gwyn Jones contributed six kills, while Shania White and Brenna McIlroy each had five.

MSU will finish up the Georgia Tech Invitational on Saturday evening, taking on the host Yellow Jackets at 8 pm.

QUOTABLE
“We started pretty slow last night, and that was a point of emphasis for us today – come out poised and strong. I thought we did that, and did a nice job of weathering the storms when Auburn tried to come at us a bit. We’re still a work in progress and working on getting better in all aspects of the game, but I like the way we’ve responded to things when they come up in matches, making the necessary adjustments. We have a challenge with playing the host school tonight, but we’re going to eat, rest, and come back to the gym determined to finish off the weekend the way we intended.” – Head Coach Cathy George

ATLANTA – The Auburn volleyball team faced No. 17 Michigan State to start day two of the Hyatt Regency Invitational and the Spartans came away with a 3-0 (25-16, 25-19, 25-20) win in O’Keefe Gym Saturday afternoon.

“We had the mentality and battle today, but we just got beat on the serve and pass,” head coach Rick Nold said. “Michigan State served very aggressively and had tough serves all day. We just need to do a better job at handling these situations and we’ll come back out tonight ready to play.”

The Spartans jumped out to a quick lead to start the match, taking a 6-2 advantage. MSU pushed ahead at 14-5 to force an Auburn timeout and a kill from Reece and a pair of Spartan errors followed to stall the MSU run. Earl picked up back-to-back aces late in the set, but the Spartans finished off the stanza with a 25-16 win.

Spartan errors and a kill from Jones put Auburn ahead early in the second at 4-2 before MSU battled back with a pair of runs, pushing a 7-5 lead. Michigan State held its slim margin throughout the middle of the set until a kill from Reece and a service ace from Karis Beasley brought the Tigers within one, 18-17. The Spartans regrouped and pushed on to win 25-19.

MSU kept its momentum going into the third and forced an early Auburn timeout, 7-1. The Tigers inched back within two at 10-8 on a kill from Filley, but tough Spartan serves helped MSU forge ahead at 22-14. A 6-1 Auburn run brought MSU to a timeout, 23-20, but the nationally-ranked Spartan squad held on for a 25-20 victory.

Auburn’s final match of the Hyatt Regency Invitational is set for 5 p.m. CT vs. Furman in O’Keefe Gym.