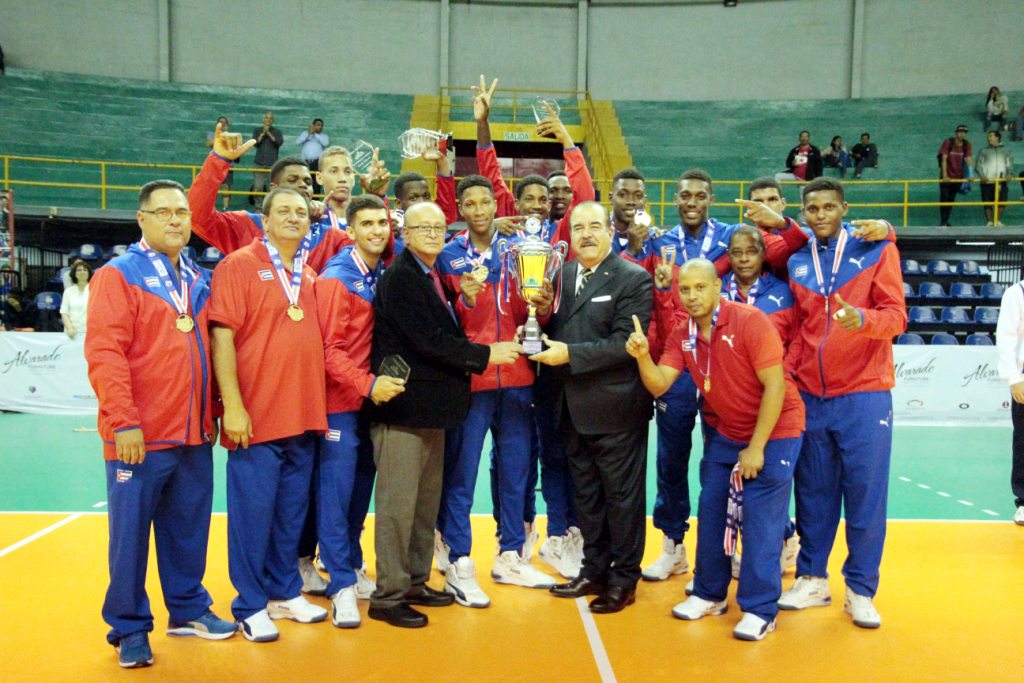 Cuba took down USA to win the NORCECA U19 Continental Championship, although both teams will head to the 2019 FIVB Worlds. Archive Photo via NORCECA

In the match for the gold, Cuba earned their second sweep defeat of the United States Boys’ Youth National Team, sending the Americans to the silver medal. The victory also locks up the NORCECA U19 Continental Championship for Cuba for the second straight time.

Despite the result, both nations had already accomplished the most important aspect of this tournament: qualifying for the 2019 FIVB U19 World Championship.

Neither team found much rhythm in knocking down aces, and attacks weren’t overwhelming. The biggest key was the Cuban defense, which out-blocked the Americans 13-4, spearheaded by Luis Vidal Allen Serrano (six blocks, nine points). They also held every player on the United States to seven or less points, as Clarke Godbold (seven points) and Alex Knight (six points) notched the most. On the flip side, Alexei Ramirez Masso (12 points) and Jose Miguel Gutierrez Suarez (11 points) could not be stopped.

Cuban head coach Mario Izquierdo: “Thanks to my boys’ efforts we reached our goals and all the people involved in this Project. This victory brings good news to my country after suffering a tragic plane crash a few weeks ago; giving good news like this is the best we can bring back home. My boys worked at their fullest, they deserve because of their many sacrifices. We were aggressive, our blocks en reception worked out great.”

USA head coach Brad Keller: “Cuba is a really good team, they are physical and they bring from the service line like I have never seen before. Congratulations to Cuba they did a good job. As for us, we earned a tough bid to worlds, we got a year to get better, we will get better and we’ll compete. What to improve: I thought our serves and passing that are our bread and butter, a little bit of transition and blocking scheme; they are all doable.”

Puerto Rico couldn’t crack a bid to the 2019 FIVB U19 World Championship, but they got the next best thing with a tournament closing victory. The Group A champions took down Guatemala to collect a bronze medal and a third-place finish.

The block for Puerto Rico was the main difference in overcoming a 1-0 deficit and winning in four, as they notched a 15-3 edge in blocks. That contributed to things opening up more for Puerto Rico offensively, led by the dynamic duo of Sebastian Negron (15 kills, 19 points) and Wilmer Hernandez (13 kills, 18 points). It was the others pitching in too for Puerto Rico to the tune of 22 more kills. Compare that to Guatemala, who had the top two presence of David Aimar Ismalej Ixpata (13 kills) and Kevin Carlos Hoil Ortega (11 kills), but had just 10 kills from the others.

Puerto Rican opposite Sebastian Negron: “It was a rocky beginning but we didn’t lose control; we were patience and got back into our own rhythm. Our blocking was crucial in our recovery and being more effective. We take third place of the zone y we hope to qualify to worlds in another tournament.”

Guatemalan head coach Luis Fernando: “In conclusion this was a win-win experience. The opportunity for such young players is unbeatable. We put up a good fight against Puerto Rico, we learned a lot and it’s really satisfying finishing just short behind the best ranked teams in the world.”

The first three matches didn’t go in Nicaragua’s favor, but they ended the tournament on a high-note with a 3-1 victory over Costa Rica in the fifth-place match. That was the opposite for Costa Rica, who was unable to grab the late victory in front of a home crowd.

Costa Rica was the team who got off to a hot start by winning the first behind Steven Jimenez Alvarez Yeyco (10 points) and the serve of Jefferson Guzman Orozco (eight points, three aces). Guatemala shifted back the momentum with their block and attack, which was ignited by Josue Cano Osorio (15 points) and Axel Zamora Morales (13 points).

Nicaraguan wing-spiker Josue Cano: “We were disciplined in following our coaches’ instructions, we were focused on limiting our errors and our defense worked well, added to the fact that our blocking stopped Costa Rica’s wing spikers. We didn’t lose concentration in the last set and that’s why so big of a margin.”