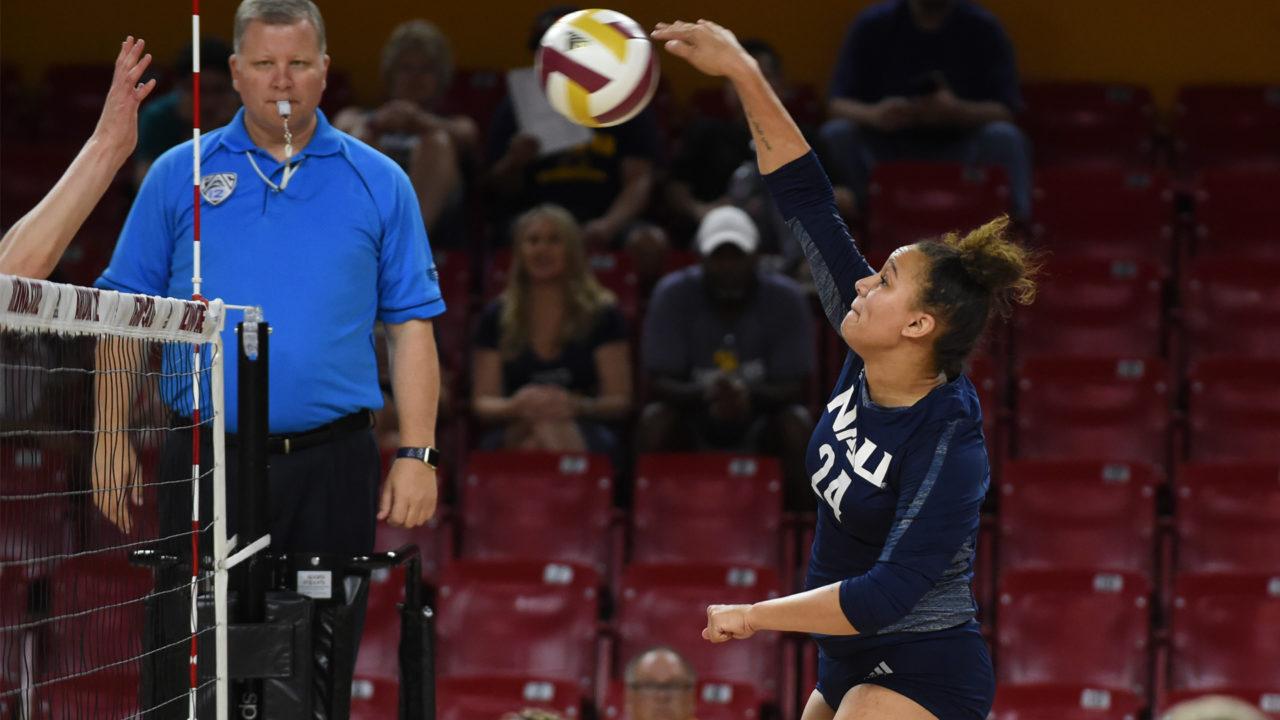 OGDEN, Utah – To start possibly their most important two-week stretch to date, the Northern Arizona volleyball team rode the collective right arms of junior Abby Akin, sophomore Heaven Harris and freshman Ryann Davis to a 25-22, 25-18, 25-21 sweep of Weber State. The trio combined for 34 of NAU’s 41 kills Thursday night as the ‘Jacks improved to 14-8 overall and 6-3 in the Big Sky with the three-set road victory.

“We passed the ball well and both Abby (Stomp) and Aubrea (Bandfield) did a great job getting the ball to our middles and our rights,” said head coach Ken Murphy. “Our balance is one of our greatest assets and tonight was a great example. Heaven, Abby (Akin) and Ryann too got in a great rhythm with our setters and really carried our offense.”

Harris recorded her highest kill total since she also posted 15 against, coincidentally, Weber State back on Sept. 22. She matched her 15-kill output and hit .379 against the Wildcats, who entered the evening as one of four teams tied for first in the Big Sky.

Another big piece of the Lumberjacks’ victory was their service pressure as they totaled 10 aces – their first double-digit ace performance since the second match of the season. Freshman Aubrea Bandfield led with three aces, while Akin, junior Sydney Lema and junior Abby Stomp each totaled two.

When NAU was not acing Weber State, the Lumberjacks’ serve forced the Wildcats out of their offensive system repeatedly. Weber State wound up hitting only .162 compared to NAU’s attack clip of .209.

“Our serving and defense were on point from early in the match,” Murphy said. “We got pressured on Weber and slowed them down. When we get into a good serve and defensive rhythm, that defines us.”

Harris, Akin and Davis asserted themselves from the start, accounting for 13 of NAU’s 14 kills in the first set. Aided by three straight Weber State attack errors, NAU took the lead for good with a 4-0 run that broke a 5-5 tie. After the Wildcats pulled within 18-16, a Davis kill followed by a Lema ace doubled the Lumberjack lead. After a Bandfield ace put NAU within set point at 24-18, the Lumberjacks needed a Wildcat service error on their fifth set point to clinch the opening game.

Neither team could find an offensive rhythm in the second set, but five more NAU aces, along with three of the Lumberjacks’ 6.0 blocks, proved to the difference. A block by Akin and Harris snapped the final tie at 8-8 and the Lumberjacks would lead by as much as six at 20-14. Three straight Weber State points sliced the lead in half, but NAU would quickly answer with an Akin kill and two aces from Stomp.

The Lumberjacks seized control of the final set with an 8-0 run that put the Wildcats in a hole too deep to recover. Redshirt senior Kaylie Jorgenson tied the score at 10-10 with a kill before Bandfield served seven straight points – four coming off kills by Harris. NAU’s seven-point lead dwindled to three when Weber State closed to 24-21, but Harris’ eighth kill of the set closed out NAU’s fourth Big Sky sweep.

NAU will close out a stretch of four consecutive road matches on Saturday with a 6 p.m. MST tilt at Idaho State. The Bengals were upset in five sets by Southern Utah on Thursday and shares an identical 6-3 conference mark with the ‘Jacks.